Please ensure Javascript is enabled for purposes of website accessibility
Log In Help Join The Motley Fool
Free Article Join Over 1 Million Premium Members And Get More In-Depth Stock Guidance and Research
By Stephen Lovely - May 17, 2020 at 9:46AM

The company's SVOD solution is getting more viewership out of the widespread lockdowns.

The COVID-19 crisis has transformed the way many of us live. And while it may be a privilege to remain safely at home, life in isolation can be pretty boring. That has huge numbers of people in the United States and beyond turning to streaming video for entertainment. In fact, TV viewing in general and streaming hours in particular have surged since the pandemic and its consequences reached the U.S.

Not all technology and entertainment companies are benefiting equally, though. Some pay-TV companies are actually struggling. Verizon, for example, took a record-breaking hit to its FiOS pay-TV subscription figures (the virtual elimination of live sports could have something to do with that). Among streaming services, some companies are getting bigger boosts than others. And according to Parrot Analytics, no service is getting a bigger boost in consumer demand than Apple (AAPL 0.88%) TV+. 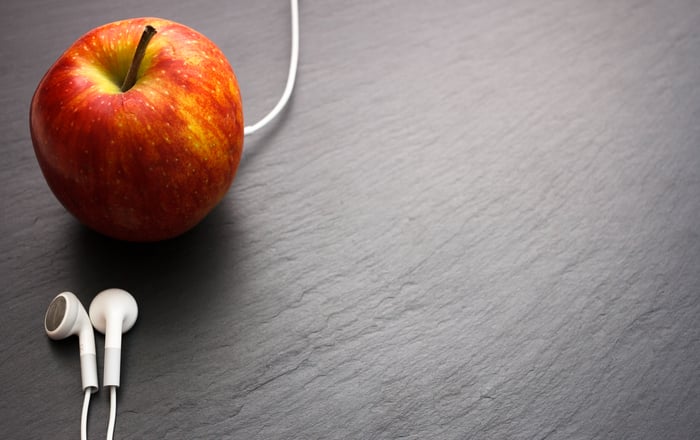 The Apple of customers' eyes

Apple TV+ is a bright spot for the company in an uncertain time. According to Parrot Analytics, customer demand is up for the service by the greatest proportion out of all streaming services.

To be clear, Parrot Analytics has something pretty specific in mind when it says "demand." The firm has its own proprietary metric that it says takes "a holistic view into what people really want" by looking at the different ways in which consumers signal that they're interested in watching a specific show. According to these "demand expressions," demand for season premieres is split evenly between traditional TV and streaming alternatives. Among streaming services, the service that has seen the biggest boost in recent weeks is Apple TV+.

According to these numbers, Apple TV+ shows seized a larger share of viewer demand in March. But don't sleep on Netflix, which also apparently grew more appealing relative to its competitors last month. Given that Netflix is already so dominant in streaming, this is a big deal.

By contrast, this analysis found that Disney+ and Hulu both lost demand share.

How much will quarantine benefit Apple TV+?

Apple TV+ launched right around the same time that Disney+ did, but the tech-backed debut didn't meet with nearly as much fanfare as Mickey's effort did. That wasn't necessarily a shock, considering Disney's (DIS -1.72%) advantages -- it has a long legacy in entertainment, set up the move to streaming with a massive acquisition, and introduced Disney+ with a pricey marketing blitz.

If Parrot's numbers are to be believed, Disney+ is finally losing some of its hype. Without much in the way of new content, Disney+ hasn't been prepared to increase consumer demand during this stay-at-home streaming boom. Apple TV+, on the other hand, is able to offer many viewers brand new experiences. And that's due in part, of course, to the fact that Apple TV+ was the less popular of the two when both debuted earlier this year. One way to read the increase in interest in Apple TV+ and the loss of interest in Disney+ is as a warning against relatively small libraries and original content slates. Netflix has taken some flak for an approach that is sometimes characterized as quantity over quality, but Netflix viewers always have something new to watch, while subscribers to relatively lean services may quite literally run out of fresh content, especially in a situation like the unprecedented one we're in now.

If it's indeed true that Apple TV+ is growing in hype, the big question is how much of this is a relative measure. We've been presuming so far that Apple TV+ is starting from behind Disney+, which is the conventional wisdom, but Apple hasn't said exactly how many customers its premium streaming option has, and some estimates are more optimistic than others. Ampere Analysis, for example, concluded that Apple TV+ actually has more subscribers than both Disney+ and Hulu. That may or may not be so (and may or may not be particularly meaningful -- the company's decision to include Apple TV+ free for customers buying new Apple devices means that the number of subscribers and the number of actual users are likely very different).

It's possible that this quarantine surge is building on an already very strong presence in the streaming market, but it's at least as likely that Apple TV+ is benefiting from the fact that Disney+ was so dominant early on -- and that many viewers have already seen The Mandalorian -- at a time when having something new to watch is more appealing than ever.

Either way, if Apple can take viewer demand for new content and translate it into loyal viewership for original shows and movies, then it will take a sizable opportunity away from this strange and uncertain era.