Please ensure Javascript is enabled for purposes of website accessibility
Log In Help Join The Motley Fool
Free Article Join Over 1 Million Premium Members And Get More In-Depth Stock Guidance and Research
By John Rosevear – May 18, 2020 at 11:18AM

GM's truck factories have reopened, and investors are cautiously optimistic.

Shares of General Motors (GM -0.94%) were trading higher on Monday amid a broad market rally, as the company reopened several U.S. factories that had been idled since March.

After weeks of planning, today's the day: Several of GM's U.S. factories, including truck plants in Flint, Michigan, and Fort Wayne, Indiana, restarted production this morning. Early reports suggested that worker attendance was at or above expectations, and that operations were running smoothly amid extensive changes to protect workers from the COVID-19 virus. 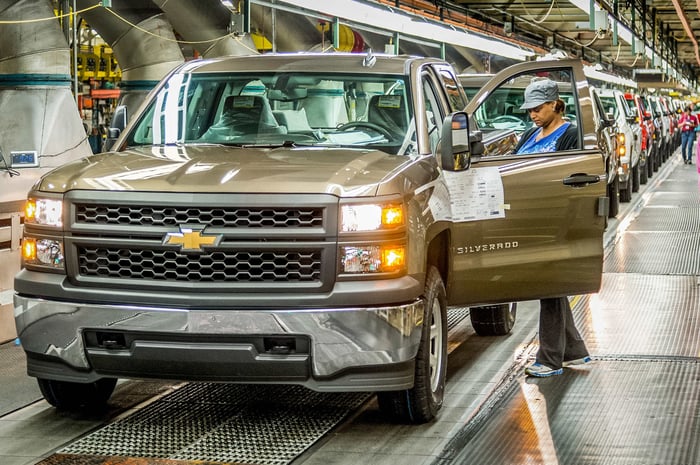 GM and other automakers shut down their factories in North America in March amid calls for social distancing to slow the spread of the coronavirus. GM, like most of its rivals, books revenue when vehicles are shipped to dealers, so idling its factories has been costly.

Restarting will be a costly exercise, too, as supply chains are reactivated and working capital reinstated. But auto investors cheered the resumption of production on Monday, and rightly so.

For GM, resuming production in North America will be a process that unfolds over several weeks. The company's first priority is to get pickup trucks to its dealers to avoid tight supplies as America reopens; GM is tentatively planning to reopen its third pickup factory, in the Mexican city of Silao, later this week, according to a Reuters report.

For now, GM's factories will be running on just one shift, versus the usual two or three, as it's not yet clear what demand for new vehicles will be like in the next few months. But if GM (and its rivals and suppliers) can avoid virus outbreaks at reopened factories, and if consumers resume buying vehicles, then auto investors will be able to breathe a little easier.