Please ensure Javascript is enabled for purposes of website accessibility
Log In Help Join The Motley Fool
Free Article Join Over 1 Million Premium Members And Get More In-Depth Stock Guidance and Research
By Zhiyuan Sun – May 19, 2020 at 6:33AM

Should investors be excited or concerned about Relmada Therapeutics' attempt to treat severe depression with a variant of methadone?

Every year, about 17.3 million adults in the U.S. will experience at least one major depressive episode. Approximately 1 in 3 will fail to see improvement in their symptoms after treatment involving at least two different types of medications, and will be diagnosed with a condition called treatment-resistant depression (TRD). Tragically -- and by definition -- there is a lack of effective treatments for this condition. Patients with TRD are twice as likely as patients with regular depression to be hospitalized and often suffer debilitating episodes or mental breakdowns that can severely affect quality of life.

Fortune has not been kind to drug companies looking into drug candidates that could combat TRD. Recently, Axsome Therapeutics' (AXSM -0.93%) candidate failed to demonstrate efficacy against placebo in its late-stage clinical trial. While Johnson & Johnson's (JNJ -0.46%) recently approved Spravato provides fast depression relief in patients with TRD, the drug is known to have serious side effects, putting patients at risk of developing suicidal tendencies or becoming heavily sedated.

Hence, the pharmaceutical industry is working to find a solution that can provide relief for TRD patients without subjecting them to further psychological risk from side effects. One potential candidate is Relmada Therapeutics' (RLMD 4.56%) REL-1017, an opioid that has demonstrated significant potential in phase 2 trials targeting TRD. The mere thought of using an opioid to treat depression, however, may sound the alarm bell for some investors.

Can the company be successful, and does it warrant a buy? Let's find out together. 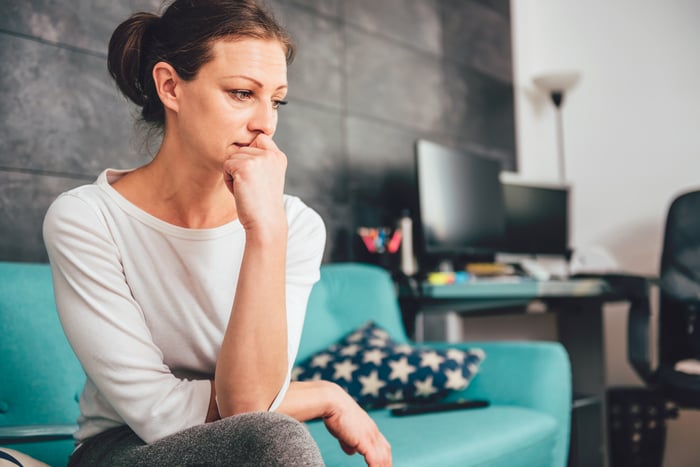 What is this "miracle" opioid?

While it is itself an opioid and potentially addictive, methadone is used to treat opioid addiction by blocking or blunting the effects of other high-acting opioids (such as heroin) by producing a smaller, long-lasting painkilling effect. The chemical is considered racemic, meaning one normal dose contains two types of methadone that only differ by an optical reflection in their molecular structure.

It's kind of like how an object's orientation is different when viewed in a mirror, and believe it or not, such a small change can leave the two compounds with dramatically different chemical properties. Through the aid of an auxiliary, Relmada was able to isolate the right-oriented compound of methadone, known as dextro-methadone, and use this effectively to treat TRD in phase 2 trials by targeting the N-methyl-D-aspartate (NMDA) receptor responsible for transmissions between neurons in the central nervous system. It's this receptor that is theorized to cause depression.

Does the drug work?

Clinical results seem to support the drug's efficacy. In a phase 2 study involving 62 patients with TRD, significant depression relief was witnessed as early as four days after treatment began. By day 14, patients who took REL-1017 saw their depression symptoms decrease by up to 10 points on the Montgomery-Asberg Depression Rating Scale (MADRS) compared with patients who took placebo. Keep in mind that the mean MADRS score for patients before the trial began was 34 points, so a 10-point drop represents a reduction in depressive symptoms of at least 30% attributable to REL-1017 (because the reduction is compared with a placebo, not with a baseline).

Critically, management noted in the press release that "there was no evidence of either treatment-induced psychotomimetic [psychosis] and dissociative AEs [adverse events] or withdrawal signs and symptoms upon treatment discontinuation." This is a huge breakthrough. An antidepressant that can treat the worst of what the condition brings, without putting patients at risk of suicide or sedation, is arguably what patients with TRD direly need.

At this point, one obvious risk factor is the fact that opioids are addictive, and patients who take REL-1017 may become addicted to the drug after taking it for a prolonged duration. At first glance, this is a valid point; Relmada's phase 2 study only lasted for three weeks and did not evaluate patients' long-term dependency on the drug.

However, this is where understanding small details regarding the drug becomes critically important.

Remember how I said methadone is a racemic mixture? Again, this means it consists of two compounds that differ only by an optical reflection in their molecular structure, but have different chemical properties. Well, it turns out that dextro-methadone (the kind Relmada isolated -- "dextro" is Latin for "right") exhibits no opioid activity, according to research reports. The addictive properties of methadone can be solely attributed to levo-methadone ("levo" is Latin for "left").

Since the drug has proven effective at treating the worst depressive symptoms, has no serious side effects, and potentially has no opioid activity, I think REL-1017 is highly likely to become a new top-line treatment for TRD.

Relmada is planning to conduct two phase 3 clinical trials involving REL-1017 in the first half of 2020, and the company has more than enough capital to fund such expenses. Currently, it holds over $100 million in cash and investments, with an annual run rate of just $16 million for research and development expenses. That gives the company more than enough time for shareholders to see phase 3 results before it needs to raise more capital.

Meanwhile, Relmada's market cap stands at only $600 million, compared with a $16 billion global market opportunity for treating depression and anxiety this year. Overall, this is a stock biotech investors who are interested in the development of groundbreaking antidepressants will not want to miss.