Please ensure Javascript is enabled for purposes of website accessibility
Log In Help Join The Motley Fool
Free Article Join Over 1 Million Premium Members And Get More In-Depth Stock Guidance and Research
By Rich Smith – Updated May 20, 2020 at 1:12PM

A positive prediction from Delta pulls the other airlines up with it.

Airline stocks were getting a second wind in early afternoon trading Wednesday, with shares of Delta Air Lines (DAL 1.71%) leading the charge with a 4.1% gain as of 12:15 p.m. EDT today. Southwest Airlines (LUV 0.41%) stock and American Airlines Group (AAL 3.46%) were not far behind, climbing 4% and 2.5%, respectively. Credit for the surge must go to Delta.

Speaking on Fox Business this morning, Delta CEO Edward Bastian predicted that after months of flight reductions, Delta will probably execute a turn in the near future and begin slowly increasing capacity again in June and July.

Currently, the air travel business remains slow, and Delta's load factor is about 35% to 40%, Bastian said. But the company believes it can grow to 60% even if that means keeping middle seats open to promote social distancing on its airplanes. 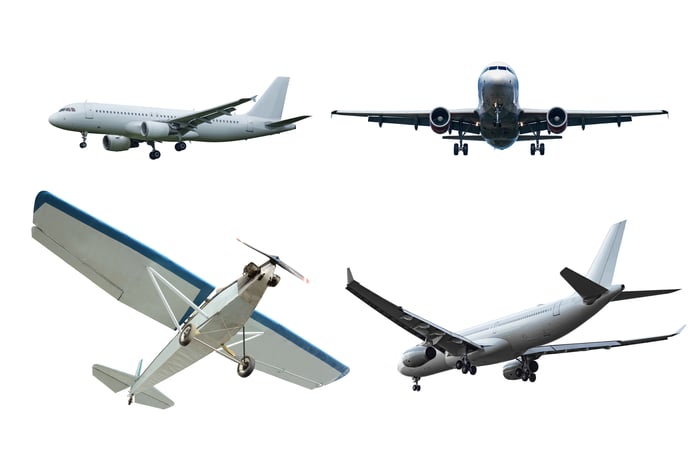 Bastian added, "Once we get close to 60% on an individual route, that'll be the trigger for us to add more planes into the system." Judging from current trends, he believes the company will probably add about 200 flights in June, and then 200 or 300 more in July. And this is a trend he sees continuing over the next 12 to 18 months.

Bastian was speaking about domestic travel trends. He cautions that international traffic, which is subject to travel bans and advisories from multiple countries that could slow a recovery, probably won't start coming back until 2021.

Still, if a revival is going to happen, domestic travel is probably the place Delta would like to see it happen first. According to data from S&P Global Market Intelligence, in ordinary years, Delta derives more than 70% of its annual revenue from domestic flights, and less than 30% from international travel.

And if what holds true for Delta applies to other airlines, then American Airlines and Southwest could benefit from this trend even more. American does 73.5% of its business domestically, and Southwest more than 97%!

For that matter, even United Airlines Holdings (UAL 2.92%), the U.S. carrier most exposed to international business (37.5% of revenue comes from Atlantic, Pacific, and Latin American travel), should be hoping for a revival of U.S. domestic traffic most of all.