Please ensure Javascript is enabled for purposes of website accessibility
Log In Help Join The Motley Fool
Free Article Join Over 1 Million Premium Members And Get More In-Depth Stock Guidance and Research
By Stephen Lovely – May 21, 2020 at 6:45AM

TV is booming, but not every company in the TV business is benefiting.

For most industries, the COVID-19 pandemic means that 2020 has been anything but business-as-usual. And, in most industries, that's a bad thing. But some companies and industries have been exceptions to the grim rule. Tech companies in general and teleconferencing technologies, in particular, are looking relatively healthy thanks to new realities in the working world.

And it's not just at work that the world is changing. Another business space seems poised to do relatively well amid the COVID-19 pandemic: television entertainment. As this pandemic entered the United States, Nielsen predicted a surge in TV viewing. Many (including us) expected that to benefit streaming and pay TV providers alike. But what has been a relatively good couple of months for streaming giants like Netflix (NFLX -4.49%) has been brutal for pay-TV providers like Verizon. Why? Here are four good reasons. 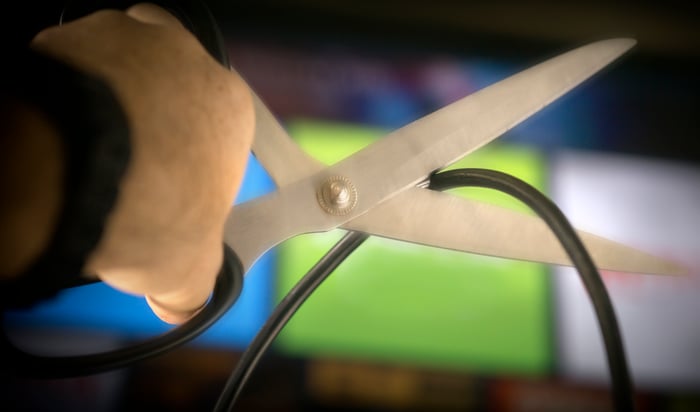 A lot of practical differences separate legacy pay-TV services and their streaming competitors. One that looms particularly large right now is the setup process. "Over-the-top" services like Netflix are very easy to get set up with: Customers just have to sign up in their browsers or on their favorite devices to start watching. By contrast, many legacy pay-TV services require professional installation. And if anything stops working, it's the same deal: A technician has to show up in person.

And that's a problem. Safely installing systems for new customers is all but impossible in many areas. That means that the flow of new subscribers -- already insufficient to offset the losses in most cases -- is effectively stopped up for many cable and satellite providers, as well as some IPTV providers (though not all: AT&T's (T -1.42%) AT&T TV, for example, can be set up by customers without help). And customers who are already paying may see less reason to do so if they have any need of in-person support, which in many cases is unavailable during the pandemic. Both Verizon and Cox Communications have suspended in-person technician visits.

All of this hurts legacy pay-TV services, and none of it hurts modern streaming alternatives.

2. Price and flexibility of service

Legacy pay-TV companies ask customers to commit. To lock in prices like the discounted rates currently being advertised for AT&T's pay-TV service AT&T TV, customers have to sign on for two years of service -- cancel early, and they're subject to fees. That's not the case with streaming alternatives like AT&T's own AT&T TV Now. Despite being a live TV service, AT&T TV Now operates month-to-month, giving its subscribers a freedom that AT&T TV (without the "Now") subscribers lack.

Live TV services are pricey no matter how you slice it -- the $65 (and up)-per-month AT&T TV Now is cheaper than AT&T TV's cheapest two-year average rate of $71.50 per month ($50 per month for year one, $93 for year two), but not by much. But subscription video on demand (SVOD) services like Netflix are relatively cheap. In fact, Netflix (which charges $12.99 per month for its most popular plan) is relatively pricey by SVOD standards. Disney's (DIS -2.60%) Hulu is just $5.99 per month, and its newer service Disney+ is just $6.99 per month.

The flexibility of streaming services might make them easier to cancel, but the low prices found in the streaming space may make them easier to justify. And being able to cancel at any time gives consumers a way out at an uncertain time. With unemployment skyrocketing, Americans may look to cut entertainment spending. Those whose contracts with pay-TV have gone on long enough to cancel without penalty may be tempted to do just that. At the very least, new sign-ups for pricey and inflexible pay-TV services look a lot less appealing.

Cable has always been relatively pricey. But it has also long had things that streaming services can't, or won't, match -- in particular, live sports. Live sports are widely considered to be among the most "DVR-proof" things that air on TV (though some experts debate the truth of that reputation). And local TV contracts have kept many big games off of streaming services, even those services run by the leagues such as baseball's MLB.TV.

All this has made cable and satellite heavily reliant on sports and has driven up the cost of sports rights still further -- even during this pandemic. Customers may consider cable and satellite overpriced, but at least part of the problem is the high cost of the sports channels that these legacy pay-TV services are increasingly reliant on. As of 2018, Disney's ESPN alone accounted for an average of more than $7 in each cable customer's bill.

High though the costs may be, sports are worth it for cable companies because they keep sports fans around. But most sports are largely off the air these days. Foreign substitutes are airing in some places -- ESPN is showing Korean baseball in the morning, and Fox's FS1 is showing German soccer on weekend mornings and early afternoons -- but the big, popular American sports are MIA. Some have floated the idea of rebates for sports fees, but no refund has yet been explicitly promised to consumers. So why would sports fans keep their cable or satellite subscriptions? The likely answer: they won't.

4. Pour one out for cable

Individual viewers aren't the only pay-TV customers who like to put sports on. Bars and restaurants frequently turn to sports channels, too. Bars, restaurants, and other spaces open to the public make up an important segment of pay TV's customer base. These businesses may even have more than one cable or satellite feed at once -- sports bars, in particular, may have as many as a dozen or more.

During the COVID-19 pandemic, virtually all of these sorts of businesses are closed to dine-in customers -- and many are canceling their cable or satellite contracts. The result is a serious exodus of customers from legacy pay-TV. For Netflix and the rest of the streaming gang, the effect is virtually nonexistent. Aside from the occasional bar viewing of a big HBO show like Game of Thrones (already off the air before the pandemic), streaming services don't have much riding on the fate of bars and restaurants. It's just one more thing that helps explain streaming's better lot during the pandemic.