Please ensure Javascript is enabled for purposes of website accessibility
Log In Help Join The Motley Fool
Free Article Join Over 1 Million Premium Members And Get More In-Depth Stock Guidance and Research
By Billy Duberstein - May 23, 2020 at 8:30AM

AMD seems poised for significant gains against Intel over the next year.

One of the biggest winners in the semiconductor space over the past few years has been Advanced Micro Devices (AMD -5.62%). The CPU and GPU designer had long been an also-ran in the chip space, with minimal market share relative to CPU leader Intel (INTC -2.49%) and GPU leader NVIDIA (NVDA -5.20%).

However, that is clearly changing. Look no further than AMD's stock price relative to the market for the last five years as evidence of its renaissance under CEO Lisa Su, who took over in 2014. 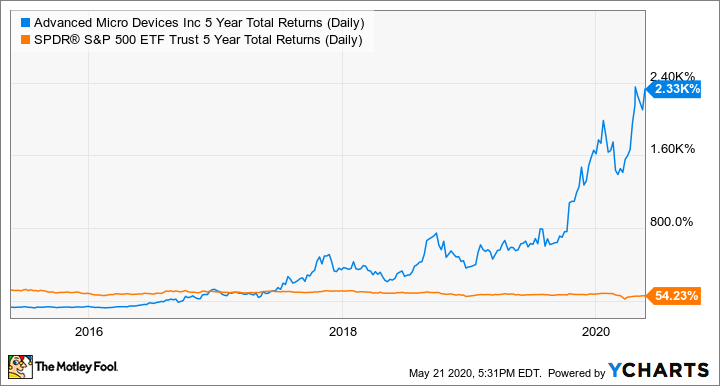 But just because AMD has annihilated the overall market's returns for the last five years doesn't necessarily mean it's too late to get on the AMD train. In the field of technology, oftentimes it's the winners that keep on winning.

Looking at recent developments in the chip space, AMD does appear to have a solid and even improving outlook going into the second half of 2020 and into 2021. 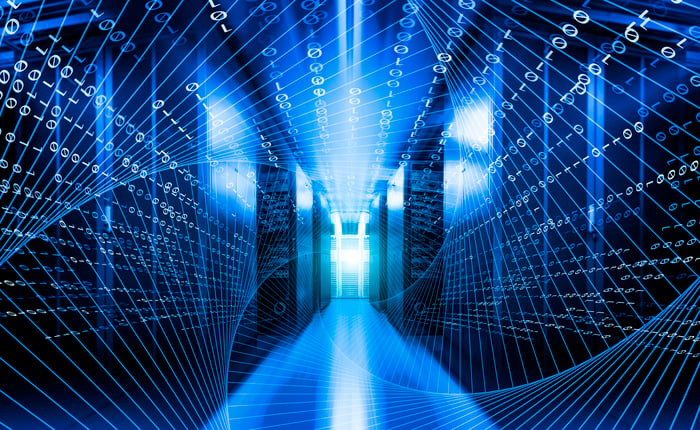 Can AMD grow into its valuation? Image source: Getty Images.

The story for AMD really changed in 2017-2018, when the company was able to leap ahead of Intel in producing a 7nm CPU chip, equivalent to Intel's 10nm. Intel, which has traditionally held a lead in manufacturing thanks to its in-house capabilities, tripped up in the technologically sophisticated transition to 10nm, allowing AMD and foundry partner Taiwan Semiconductor Manufacturing (TSM -3.60%) to forge ahead.

With client market share gains readily under way, what could be really exciting is AMD's potential in servers, where AMD still has low-single-digit market share. According to Passmark Software, AMD's server market share is still only 2%. According to Mercury Research, AMD's server market stands at 4.5%. However, with the release of its second-generation EPYC chips, AMD is landing customer wins with all major cloud providers and has even won a spot in two of the three largest supercomputers in the United States.  Su thinks that with the ramp-up of EPYC, AMD can achieve 10% server market share by the end of the second quarter -- a doubling of its market share from the first quarter alone. "Q2 is actually our strongest backlog quarter that we've seen," Su saud on the recent conference call with analysts.

Given the strong long-term tailwinds for cloud computing and high-performance computing in the data center, AMD seems primed to benefit not only from that growing market but also from significant share gains on Intel as well for the next few years at least.

And don't forget about gaming

While the big story with AMD is its share gains against Intel in CPUs, its graphics and semi-custom business should also get a kick-start at the end of 2020 with the release of new Playstation and Xbox consoles. The launch of new consoles usually sparks a multi-year growth in the company's semi-custom business, which has been on the decline for years.

And AMD's graphics chips segment should also benefit from its partnership with Taiwan Semi, which resulted in strong double-digit sales in its graphics chips last quarter.  While NVIDIA is still far and away the leader in graphics chips, one shouldn't count out AMD continuing to chip away at affordable graphics chips for client computing devices either. After all, AMD was able to one-up Intel, so it's not a stretch to think it could gain share against NVIDIA as well.

In fact, according to a recent report from Digitimes, AMD has surprised NVIDIA with its efficiency gains on the 7nm node through its partnership with Taiwan Semi, with AMD already buying up a lot of Taiwan Semi's 7nm capacity. NVIDIA had been using Samsung (OTC: SSNLF) for its foundry, but apparently Taiwan Semi is ahead of Samsung in delivering yields on thee leading-edge nodes. NVIDIA, still a superior designer, has thus now contracted with both foundries fon the 7nm+ and 5nm nodes.

While AMD may not be able to leap well ahead of NVIDIA, since both use outsourced foundries as opposed to Intel's internal process, AMD could potentially gain share in the graphics market.

AMD's overall CPU market share is now over 40% across all segments, its highest in 14 years, according to Passmark. With AMD's P/E ratio at a whopping 131 times trailing earnings and 56 times forward earnings, obviously a lot of good news is priced it. In addition, the semiconductor industry can be fickle, with a changing of the guard every few years or so depending on who designs this year's better chip. After all, Intel had previously dominated the CPU market, so who says it can't regain its advantage at some point?

Yet I don't really see AMD's CPU lead dissipating anytime soon. There is a case to be made that Intel's internal manufacturing strategy is outdated, with outsourced foundries like Taiwan Semi better able to execute because of years of manufacturing experience and knowledge across a wide array of chips. If that happens, AMD could become the outright leader over the coming years, with its data center chips being the biggest X factor in whether AMD's share price can continue to skyrocket.

Given the company's terrific execution under CEO Lisa Su, I wouldn't bet against seeing AMD continue to gain share, and thus seeing the stock continue to rise over the next year as long as she's in charge.