Please ensure Javascript is enabled for purposes of website accessibility
Log In Help Join The Motley Fool
Free Article Join Over 1 Million Premium Members And Get More In-Depth Stock Guidance and Research
By Keith Speights – May 24, 2020 at 6:33AM

These big healthcare companies have strong COVID-19 programs plus a lot more.

Worries about the COVID-19 pandemic have fueled investors' excitement about quite a few stocks of companies that are focused on novel coronavirus diagnostics, treatments, or vaccines. This makes sense. On the flip side of every problem is an opportunity.

Of course, some of the excitement among investors has led to what could arguably be described as overexuberance. That's especially true with respect to some of the small companies with COVID-19 programs. But there are still several investment opportunities to be found. Here are three large-cap coronavirus stocks that still look like great picks for long-term investors. 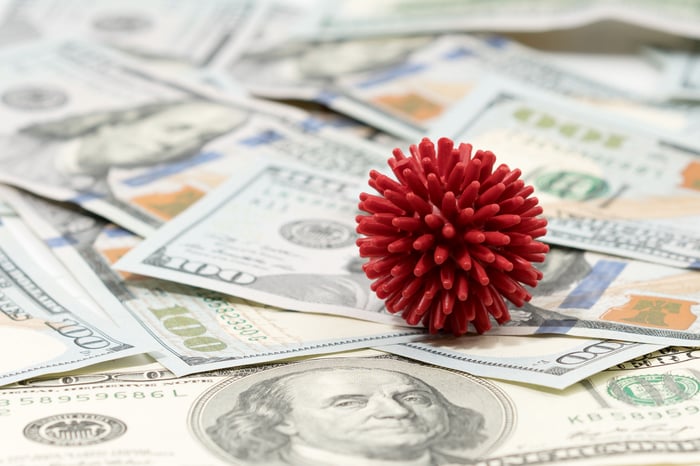 Abbott Labs (ABT 0.40%) made headlines in late March when the FDA gave emergency use authorization (EUA) for the company's COVID-19 test that runs on its ID NOW platform. The test was able to provide positive results within 5 minutes, much faster than any other test. But Abbott's test has been mired in controversy recently with the FDA warning that it could give false negative results after an NYU study identified issues.

The healthcare giant pushed back against the allegations about its test. Abbott also announced interim results last week from a clinical study in urgent care clinics that showed high levels of sensitivity for positive results and specificity for negative results. I suspect the issue will quickly fade away, with Abbott's COVID-19 tests, including its antibody test, contributing to strong growth for the company.

There's a lot more to like about Abbott than just its COVID-19 tests. Wall Street analysts project that the company will be able to deliver average annual earnings growth of 10.5% over the next five years. Several of Abbott's products are likely to drive this growth, notably including its Freestyle Libre continuous glucose monitoring (CGM) system and its Alinity line of molecular diagnostics systems.

On top of Abbott's solid growth prospects, investors can count on the company's dividends continuing to grow. Abbott's dividend currently yields 1.6%. The company has increased its dividend payout for an impressive 48 consecutive years. It's a near-certainty that the dividend will rise even higher in the future.

It seems like nearly everyone has been talking about Gilead Sciences (GILD 2.08%) after the FDA granted an EUA for its antiviral drug remdesivir in treating COVID-19 following positive results from two late-stage studies. Gilead is now scaling up production capacity enough to meet demand.

Perhaps the biggest challenge for Gilead is determining the pricing for remdesivir. If the company sets the price too high, critics will say that it's taking advantage of a global healthcare crisis. On the other hand, Gilead needs to recoup its investment in remdesivir and make at least some profit to avoid angering its shareholders.

Meanwhile, there's another virus that's not the one that causes COVID-19 that's Gilead's primary focus -- HIV. The biotech's HIV franchise continues to rake in billions of dollars in sales every quarter, and Gilead has a potentially game-changing long-acting HIV drug in phase 2 testing. FDA approval could also be on the way for filgotinib in treating rheumatoid arthritis, which would catapult Gilead into the lucrative immunology space.

Most biotech stocks don't pay dividends, but Gilead is an exception. And its dividend is quite attractive, currently yielding nearly 3.7%. Gilead has boosted its dividend payout by 58% since initiating its dividend program in 2015.

Pfizer (PFE 0.77%) expects to initiate a clinical study of its lead antiviral compound in treating COVID-19 in the third quarter of 2020. However, the big drugmaker and its partner, BioNTech, have already started dosing patients in a phase 1/2 study evaluating four COVID-19 vaccine candidates.

The two companies' approach could lead to quicker identification of a safe and effective vaccine. But Pfizer and BioNTech aren't waiting for clinical success to scale up for production. Pfizer plans to be able to produce millions of vaccine doses this year, rising to hundreds of millions of doses next year.

Pfizer has another vaccine that's very likely to become a huge winner for the company: its 20-valent pneumococcal conjugate vaccine candidate. The company also claims a strong product lineup including Eliquis, Ibrance, and Vyndaquel as well as a promising pipeline. I expect that Pfizer will deliver solid upper-single-digit percentage growth over the next decade.

If you add the drugmaker's dividend into the mix, Pfizer should generate a really attractive total return. Sure, Pfizer's dividend will decrease after the close later this year of its merger of its Upjohn unit with Mylan that will create a new entity to be known as Viatris.

However, I expect Pfizer's dividend yield will still be in the ballpark of 3.6%. And Pfizer shareholders will own shares of Viatris, which will also pay a dividend. The combination of the two dividends should be in line with Pfizer's current dividend payout.