Please ensure Javascript is enabled for purposes of website accessibility
Log In Help Join The Motley Fool
Free Article Join Over 1 Million Premium Members And Get More In-Depth Stock Guidance and Research
By Rick Munarriz – May 24, 2020 at 2:00PM

Face covering requirements have been a hot topic among theme park and amusement park fans. Let's see what this means for investors.

If you thought that nothing stirs up unrest at family reunions better than talking about politics, sports, or religion, try face masks on for size.

Nothing seems to get theme park buffs on social media more worked up than debating on gated attractions requiring guests to wear a face covering during their visits as they gear up to reopen in the new normal. It's the policy that Walt Disney (DIS -0.54%) rolled out when it opened Shanghai Disneyland two weeks ago, and it's one that rival Comcast (CMCSA -2.10%) is instituting at Universal Orlando when that resort reopens on June 5. Disney's CEO recently said it's "likely" that Disney World and Disneyland will also require face coverings to help contain the spread of COVID-19.

Shanghai Disneyland and Universal Orlando aren't just requiring that all guests wear masks to enter and remain in their parks. They are both performing temperature checks on the way in, flagging anyone running with a fever. Social distancing measures including floor markings are being implemented to keep parties reasonably apart from others. The parks are also working with lower capacity ceilings to keep crowds in check. 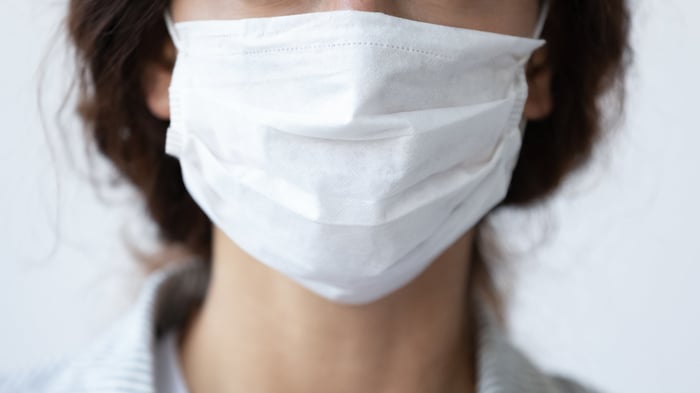 The argument for masks is clear. Face coverings aren't foolproof, but the right mask worn the right way can prevent most of the droplets that transmit respiratory infections from spreading beyond the infected wearer. There's a reason why some of the countries that have fared better in this crisis are those that have learned to embrace face covering practices when a highly contagious virus starts spreading.

However, there's also a reason why most of the smaller Florida leisure attractions opening ahead of Universal Orlando and Disney World aren't turning away mask-less patrons. Several Central Florida parks that opened this holiday weekend -- including Fun Spot, Gatorland, and Island H2O Live -- are recommending but not requiring masks. Legoland Florida will open four days before Universal Orlando, and it's providing complimentary masks for guests on the way in. It's just not making face coverings a requirement.

The smaller crowds that these non-Disney and non-Universal attractions draw is an important factor in their decision to reopen without requiring masks, as social distancing sometimes happens by default. Many, if not all, of the attractions at these gated attractions take place entirely outdoors while studios find that COVID-19 transmission tends to happen more aggressively indoors. It's also more challenging for smaller attractions to enforce in-park requirements.

The ultimate reason why smaller gated attractions are unlocking their turnstiles without requiring face coverings is that masks are a hard sell from a financial perspective. These parks cash in when guests are buying snacks and slurping high-margin sodas, and that's going to be a challenge for Disney and Comcast later this year.

Guests at the Disney World and Universal Orlando dining and shopping complexes that opened earlier this month are only allowed to remove their masks when they are seated to eat or drink. They will likely be taking a financial hit in the process, and that's before considering the tight capacity restrictions, increased sanitation costs, and folks out there that have no interest in experiencing a theme park until it's safe to not wear masks. The bubbling recession will also eat into these theme park models with high fixed costs that need business to scale to succeed.

None of these financial ramifications may be in play the next time you find yourself in a heated discussion on a social media hotbed for theme park fans. Those who favor mask requirements will argue that it's the ultimate show of disrespect to not wear a face covering in public. Those who are against the face covering rules will argue that the masks are uncomfortable and will be unbearable in the heat and humidity of Florida this summer.

You don't need to pick a side to know that no one is changing the other person's mind in this debate. National theme parks and regional amusement parks will continue to suffer financially until we're well past this phase in the pandemic crisis.