Please ensure Javascript is enabled for purposes of website accessibility
Log In Help Join The Motley Fool
Free Article Join Over 1 Million Premium Members And Get More In-Depth Stock Guidance and Research
By John Rosevear – Updated May 26, 2020 at 3:18PM

Shares of several global automakers were rising on Tuesday, as auto factories around the world continued to ramp up after shutting down in March amid the COVID-19 pandemic.

Here's where things stood for these three companies' stocks as of 2:30 p.m. EDT today, relative to their closing prices on Friday.

Nearly all automakers shut down their factories in North America in March amid efforts to slow the spread of COVID-19. Those factories are now reopening, vehicles are shipping to dealers for the first time in almost two months, and early signs are that consumer demand is looking good.

Here's where efforts to resume production in North America stand for each of these three companies.

Ford has followed a phased approach to restarting production in North America. Its parts depots reopened on May 11, all but two of its assembly plants in the U.S. and Canada reopened on May 18, and those last two (Flat Rock in Michigan and Oakville in Ontario) reopened yesterday.

For now, all of those factories are running at a slower pace than they were before mid-March. Factories that had three 8-hour shifts of workers reopened with two; all others reopened with just a single shift for now.

The restarts haven't been without hiccups. Ford briefly halted production on May 19 at two key plants, Dearborn Truck in Michigan and Chicago Assembly in Illinois, after workers tested positive for the virus. Production at the Chicago factory was halted again the next day, after supplies of seats from a nearby Lear (LEA -2.01%) plant ran short. (Lear later confirmed that its plant had closed for cleaning after a worker tested positive for the virus. It has since reopened.) Mexico's government has been slower to reopen the country, but Ford was expected to restart one of its two factories in Mexico this week. That factory, in Hermosillo, Sonora, produces the Ford Fusion and Lincoln MKZ sedans and is expected to begin production of the new Bronco Sport shortly.

Ford's other Mexican factory, in Cuautitlán Izcalli, is being retooled to make the electric Mustang Mach-E.

General Motors restarted production at its pickup factories in Fort Wayne, Indiana, and Flint, Michigan, on May 18. The company plans to reopen its remaining factories in the U.S. and Canada gradually over the next few weeks, while ramping up production at the truck plants.

GM's plan makes sense or two reasons: First, its dealers are running short of full-size pickups, which were selling well before the virus outbreak. Second, pickups are extremely profitable products, and will help to restore GM's cash flow as it ramps up its other factories to full speed. 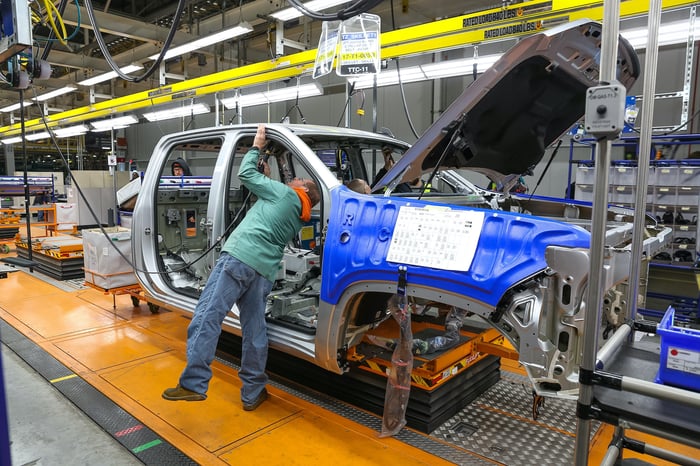 GM's plan hit a snag last week, however. The Wall Street Journal reported that crucial parts from some of GM's suppliers in Mexico weren't yet arriving in sufficient quantities to support the additional shifts of workers that GM had planned to add at the Flint and Fort Wayne factories this week. Those additional shifts are now scheduled to start on June 1.

GM has three assembly plants and one engine factory in Mexico; all began reopening on May 21.

Honda resumed production at its factories in the U.S. and Canada on May 11. It has eight assembly plants in the U.S. and two in Canada, and an additional four factories that build parts and components. All are currently up and running. Honda hasn't yet said when its factory in Celaya, Mexico, will reopen, but the company said last Friday that it was preparing to restart the plant.

For investors in auto stocks (and not just in these three companies), now we wait and see: How many buyers will show up for the vehicles that are now rolling out of their restarted factories?

Early signs are that demand for new cars, trucks, and SUVs in the U.S. is looking a bit better than expected. But it'll be another week or two before we can get a clear read on the current pace of sales in the United States and the implications for the automakers. Stay tuned.