Last week, Facebook (NASDAQ:FB) rolled out Shops in a bid to help small business owners set up a digital storefronts on its social media platforms. The company said setting up a Shop will be free to users, with Facebook taking a small cut of each transaction. The move was cheered by investors, pushing the stock to all-time highs.

This additional foray into e-commerce provides Facebook with the potential for significant upside, according to Citi analyst Jason Bazinet, who raised the firm's price target to $275 from $245, implying 22% upside from the current price. Let's look at his logic to see if it gets a thumbs up. 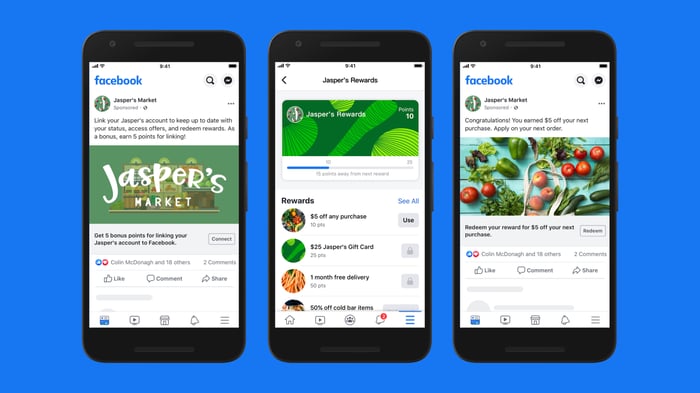 Shops will allow customers to purchase products directly from within the Facebook or Instagram apps, which will allow the company to benefit from the initiative in two ways two ways, according to Bazinet.

First, retailers will be more inclined to advertise due to the built in e-commerce functionality, linking the advertising to potential sales. Second, retailers will be charged a cut of each transaction completed on Facebook, estimated to be about 5%.

Additionally, Bazinet believes the Shop feature will benefit from the long-term trend toward online sales. E-commerce in the U.S. accounted for 11% of total retail in 2019, up from just 4% a decade earlier. Consumers are also increasingly likely to shop from within social media apps like Facebook.

This move could ultimately capture up to 2% of all global e-commerce over the coming three years for Facebook, which "could generate $7 billion of incremental net income by 2023," Bazinet wrote in a note to clients. To put that in perspective, Facebook generated profits of about $18.5 billion in 2019, meaning this step could increase the company's net income by 38%.

With more than 1.7 billion daily active users, and 2.6 billion logging in monthly, its easy to imagine a future where Facebook captures just a small piece of the global e-commerce market and boosting its fortunes. I think the analyst is onto something and Facebook stock could go much higher than $275 in the years to come.

One Analyst Thinks Facebook Shops Could Make Facebook a $275 Stock: Is He Right? @themotleyfool #stocks $FB Next Article
Current