Please ensure Javascript is enabled for purposes of website accessibility
Log In Help Join The Motley Fool
Free Article Join Over 1 Million Premium Members And Get More In-Depth Stock Guidance and Research
By Jason Hall – Updated May 27, 2020 at 6:50PM

The two Brazilian steelmakers joined several of their national counterparts on a multiday run higher, as investors start to turn more bullish on the country, even as it faces one of the world's worst COVID-19 outbreaks. But shares of the two steelmakers are still down by almost half since the beginning of 2020 and off of their highs by more than 50%. 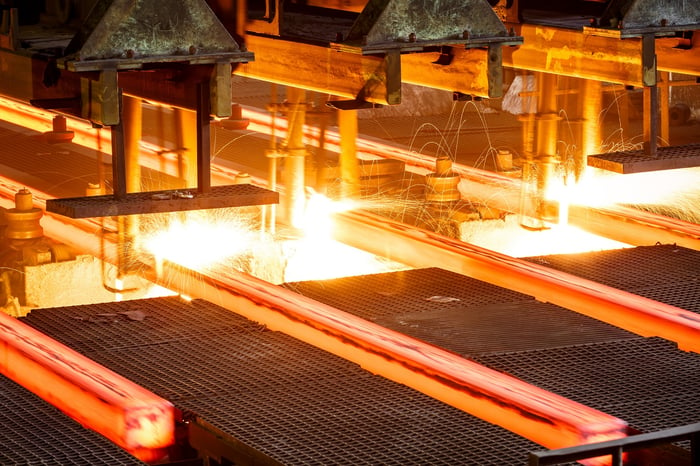 Cleveland-Cliffs, formerly a pure-play iron producer that's in the process of integrating AK Steel after acquiring the steelmaker earlier this year, has been one of the most beaten-down of the American steel companies. At this writing, its share price is down 35% from the high, on the first day of the year.

Today's price jump is likely based on the same thing that's driving up most other North American steel stocks: general optimism that economic activity (and potentially more government stimulus) will lead to better days ahead.

Brazil's worst days are likely still ahead of it. Cases of COVID-19 are on the rise, and the country's healthcare system is inundated. In the U.S., cases are on the rise in states that have opened up more of their economies in recent weeks, so the optimism could prove short-lived.

That could result in (and likely will result in) more days ahead when we see these three stocks drop by double digits. And then more days when they go back up yet again. The fact is, today's optimism isn't based on anything concrete. The COVID-19 crisis is ongoing. It's likely going to be 2021 before a vaccine is developed and widely available, while treatments also remain a work in progress but uncertain as to when they'll be ready.

And this uncertainty is where volatility thrives, so be prepared for plenty more big days, both to the up, and to the down, over the rest of the year. Moreover, the state of Brazil's economy and its more-limited ability to quickly recover give me pause for Companhia Siderurgica Nacional and Gerdau. There's just too much uncertainty to make a call for either today.

Cleveland-Cliffs does look compelling. Its iron production is some of the best and cheapest in North America, and the addition of AK Steel's finished-steel production to its portfolio should result in a good mix of businesses to help it ride out the steel industry's cycles. Cleveland-Cliffs has excellent management that has proved very good at allocating capital and building a strong business. The next year could be painful for the company and brutal for investors, but looking out a few years, today's price look like a winning investment for patient investors willing and able to ride things out.