Please ensure Javascript is enabled for purposes of website accessibility
Log In Help Join The Motley Fool
Free Article Join Over 1 Million Premium Members And Get More In-Depth Stock Guidance and Research
By Maurie Backman – May 29, 2020 at 7:49AM

Talk about a devastating number.

In April, an estimated 20.5 million Americans lost their jobs due to the economic crisis spurred by COVID-19. And per a recent tally by the U.S. Department of Labor, it's estimated that more than 40 million Americans have put in a claim for unemployment benefits since March. In fact, for the past 10 weeks in a row, unemployment claims have been in the millions, and that's telling, since we've never seen even a single week of 1 million jobless claims before -- not even during the Great Recession.

How bad will things get?

Recently, a senior White House economic advisor predicted that the jobless rate could reach upward of 20% for May and June and stay that way well into the latter part of 2020. Given that the economy is still largely shuttered, that's a reality many workers have no choice but to face. 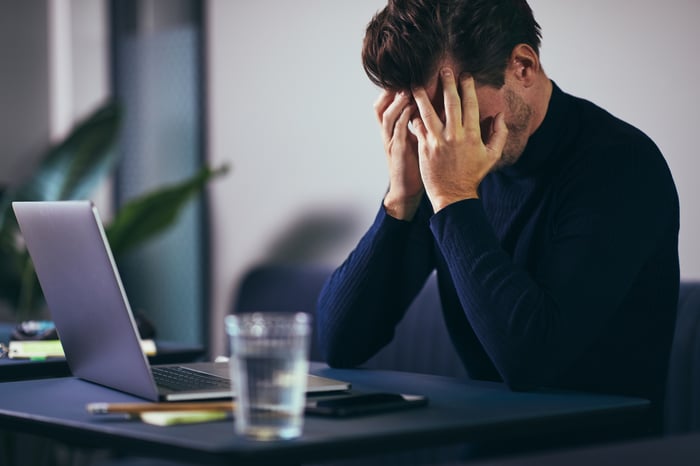 As the economy continues to struggle, more companies may seek to cut expenses by reducing employee hours, or even laying off staff altogether. And workers whose jobs can't be done remotely may have a huge problem on their hands once their employers reopen, but they're unable to return to a business location due to a lack of child care.

There's also the fear factor to consider. Though there are reports of supermarket chains and distribution centers looking to hire, a lot of people don't want to work there right now, and understandably so.

While many Americans are devastated to have been let go from work, the reality -- and a fortunate one at that -- is that some may be faring better on unemployment. As part of the CARES Act passed in March, workers on unemployment are now getting a $600 weekly boost on top of their regular benefit. And while that increase is set to expire in July, lawmakers are pushing to extend it. As such, it's feasible that minimum wage workers may opt to stay out of the labor force as long as that bonus is in play.

However, unemployment benefits themselves don't last forever. Right now, Americans without jobs get an additional 13 weeks of unemployment for a total of 39 in most states. But given that some people have been out of work since mid-March, it stands to reason that if the current economic crisis drags on well into 2021, some people will risk exhausting their benefits completely (though to be fair, during the Great Recession, those benefits were extended for several rounds).

And there's another factor to consider with regard to unemployment: health insurance, or a lack thereof. Many workers depend on their employers for subsidized health coverage, and in the absence of being on somebody's payroll, they may opt to forgo that insurance until they're employed again. That makes for a potentially dangerous situation, particularly during a pandemic. It also means many Americans may be more than motivated to once again hold down a job, even if their current unemployment benefits are equal to or higher than their former paychecks.

It's too soon to tell when the economy will start to improve and when unemployment levels will begin to fall. Much will depend on how quickly science can come up with an effective COVID-19 treatment or vaccine. For now, the best any of us can do is hope for a relatively quick turnaround -- and take steps to secure our finances in case things get exponentially worse.