Please ensure Javascript is enabled for purposes of website accessibility
Log In Help Join The Motley Fool
Free Article Join Over 1 Million Premium Members And Get More In-Depth Stock Guidance and Research
By John Rosevear – May 29, 2020 at 9:20AM

VW is ramping up to take a big share of China's EV market.

Volkswagen (VWAGY -0.68%) will invest 2.1 billion euros ($2.34 billion) in two electric-vehicle-related companies in China as it prepares to capture a substantial share of growing electric-vehicle sales in the world's largest new-vehicle market, the company announced Friday.

VW said that it will invest 1 billion euros in the government-owned parent company of Anhui Jianghuai Automobile Group (often referred to as JAC Motors), in exchange for a 50% stake. VW will also take control of an ongoing joint venture with JAC under the deal, boosting its ownership of the electric-vehicle venture (called JAC Volkswagen) from 50% to 75%. 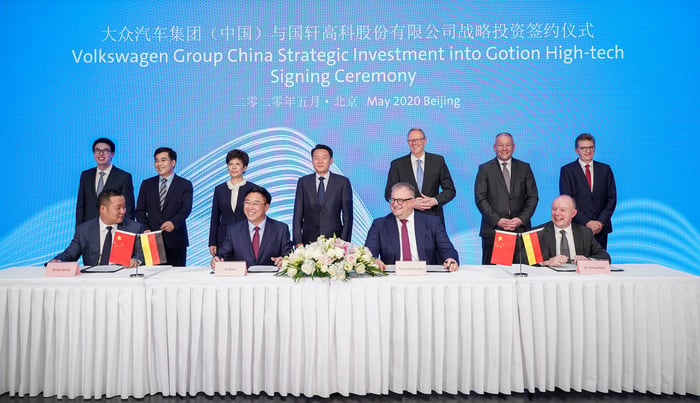 Both companies are based in Hefei, the capital city of China's Anhui province. In an interview with Reuters, VW China chief Stephan Woellenstein said that Anhui will be VW's electric-vehicle manufacturing hub in China.

The investments are the latest moves in VW's plan to build and sell 3 million electric vehicles a year by 2025. The Chinese government is aiming to have so-called "new energy vehicles" make up 25% of annual vehicle sales in China by 2025. VW, like its competitors General Motors (GM -0.94%), Toyota (TM 0.09%), Tesla (TSLA 2.51%), and a host of domestic Chinese automakers, hopes to capture a substantial share of that market.

In addition to its joint venture with VW, JAC Motors builds vehicles for upscale Chinese electric-vehicle maker NIO (NIO -2.44%). Last month, NIO announced a deal with economic-development authorities in Anhui in which it will move its operations to Hefei in exchange for a substantial investment.

It's not clear how or whether VW's investment in JAC will affect its relationship with NIO.