Please ensure Javascript is enabled for purposes of website accessibility
Log In Help Join The Motley Fool
Free Article Join Over 1 Million Premium Members And Get More In-Depth Stock Guidance and Research
By Daniel Foelber – May 31, 2020 at 11:43AM

Founded nearly 40 years ago, Cheniere Energy (LNG 0.62%) is one of the largest American liquefied natural gas (LNG) producers and exporters. The company has been instrumental in increasing U.S. capacity for LNG exports to countries in Europe and Asia that are interested in transitioning from coal to natural gas but lack the reserves to do so.

Although the COVID-19 pandemic has resulted in slowing energy demand and has interfered with LNG supply lines and project schedules, Cheniere Energy thinks it can survive this oil and gas downturn. Here's how. 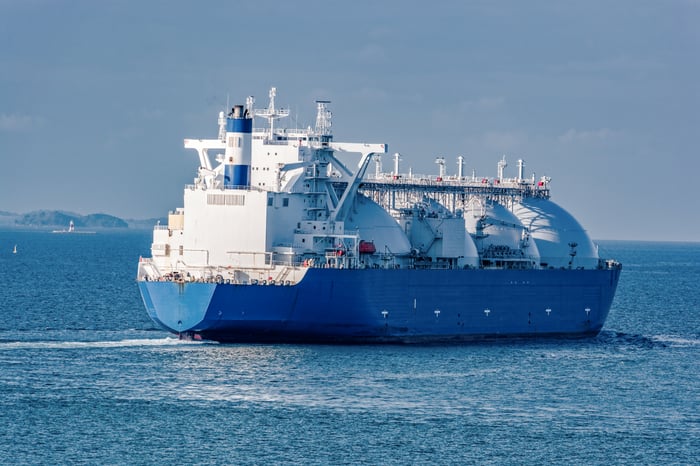 A resurgence in U.S. oil and gas production -- largely a result of implementing horizontal drilling and hydraulic fracturing across dense shale formations -- sparked the idea that the U.S. could become the largest LNG exporting country in the world.

The International Energy Agency (IEA) sees the U.S. continuing to bring supply online to become the No. 1 LNG exporter by 2024.

The first quarter ended before the global ramifications of the pandemic went into full effect. So the quarterly results shed light on the benefits of Cheniere's leading portfolio of export capacity in a more normal environment.

While many LNG companies are still building, or trying to build, export facilities to take advantage of buyers overseas, Cheniere already has a significant amount of capacity backed by long-term contracts. The company was able to generate a record amount of consolidated EBITDA in the first quarter, $1.04 billion on revenues of $2.7 billion. It also repurchased $155 million in stock during a time when many companies are cutting spending, share buybacks, and dividends. 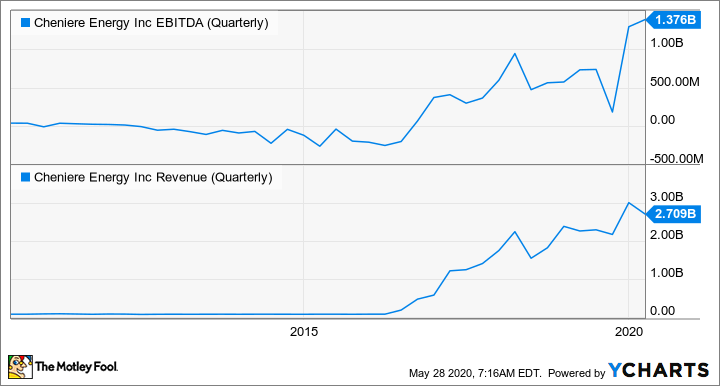 The company reaffirmed its 2020 guidance of $3.8 billion to $4.1 billion in consolidated adjusted EBITDA, which would be by far the highest in its history. Cheniere cited its fixed-fee contract model as a key reason for its stability. For example, 79% of Cheniere's first-quarter income came from long-term sale and purchase agreements (SPAs) or integrated production marketing (IPM) contracts, and 21% came from sales through short- and medium-term contracts and the spot market. Cheniere estimates that 85% of its revenue is contracted to creditworthy sources based on SPA and IPM contracts with an average remaining life of 19 years.

In terms of growth, construction continues on Cheniere's main projects, the Sabine Pass LNG Terminal and the Corpus Christi Liquefaction Project, where new LNG trains responsible for cooling and condensing natural gas continue to be added.

Cheniere's existing contracts may insulate a large part of its supply from the volatile spot markets, but its new projects could face a challenging market going forward. As mentioned earlier, newer LNG companies are seeing the same opportunity Cheniere sees in foreign markets. As their supply comes online, it will compete with Cheniere's, as will supply from other top LNG exporting countries like Qatar and Australia. This buyer's market will be a major challenge for Cheniere to write new contracts and renew existing contracts.

However, short-term headwinds are leading to several investment delays that could total more than $50 billion this year and investment delays of this magnitude would mean less LNG supply, which could reduce Cheniere's competition.

Another major challenge for Cheniere will be managing its debt. Building, engineering, constructing, and procuring projects at this scale and magnitude is extremely capital-intensive. There's also the headache and cost from the marketing and compliance efforts that go along with energy trading on the spot market and securing contracts. 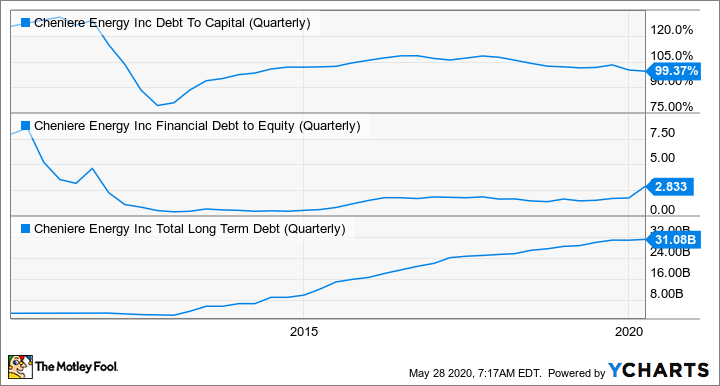 As such, Cheniere's record earnings coincide with record debt. Although Cheniere has been working hard to keep its debt to capital and debt to equity under control, its long-term debt has been rising as the company is only now starting to generate sizable income, all the while having continued investing heavily. Now that Cheniere has a sizable contracted supply, it expects its "over $5.5 billion in run-rate annual fixed-fee, take-or-pay style revenue from long-term contracts," and hopefully even higher revenue down the road, to gradually offset and reduce its debt burden.

The first quarter provided a glimpse of what the LNG market will hopefully look like for Cheniere under normal circumstances. The second quarter will give investors a better idea of how the company's contract model performed during what is expected to be one of the worst quarters in oil and gas history.

Cheniere is walking a fine line between taking on debt to build its capacity and counting on capital coming in from its contracts. There's no sugarcoating the company's record debt even though it achieved record earnings. However, like other premium LNG stocks, Cheniere has time on its side in that it is years ahead of its competitors in terms of existing capacity. This edge should help Cheniere survive the present downturn, but look to its second-quarter results for proof before you buy.