Please ensure Javascript is enabled for purposes of website accessibility
Log In Help Join The Motley Fool
Free Article Join Over 1 Million Premium Members And Get More In-Depth Stock Guidance and Research
By Leo Sun – Jun 1, 2020 at 9:12AM

AT&T should cut its losses on the pay TV platform while it still has a chance.

Five years ago, AT&T (T -1.84%) bought DirecTV for $49 billion to become the largest pay TV provider in the U.S. and the world. At the time, AT&T believed it could bundle DirecTV's satellite TV channels into its pay TV and wireline businesses. AT&T also launched DirecTV Now, a streaming bundle of channels meant to challenge Netflix (NFLX -0.81%) and other OTT platforms.

But today, DirecTV is a dead weight on AT&T's struggling pay TV business, and investors have reportedly been pushing it to sell or spin off the unit, with a merger with Dish Network (DISH -5.33%) being a possible exit strategy.

AT&T repeatedly declared it had no plans to sell DirecTV, but a recent Fox Business report claimed it was facing fresh pressure to divest the unit to cut costs. A deal might not ever happen, especially as the COVID-19 crisis forces companies to conserve their cash -- but AT&T's investors should hope it eventually sells DirecTV, for three simple reasons. 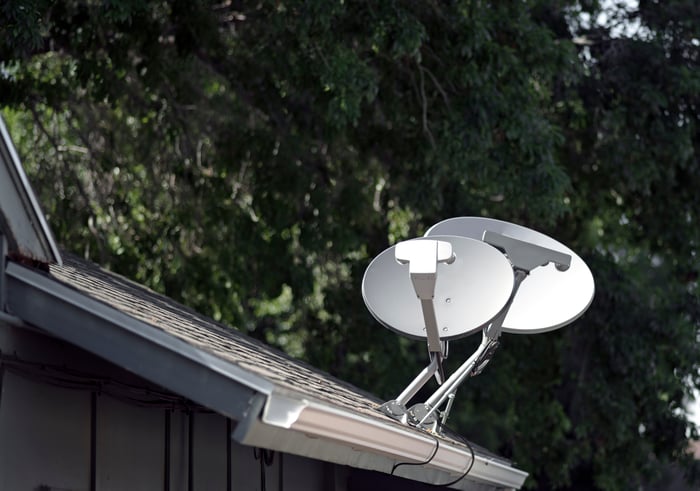 1. It would streamline its pay TV business

AT&T's pay TV business, which includes DirecTV and U-Verse, ended last quarter with 18.6 million subscribers, marking a loss of 897,000 subscribers from the previous quarter. That business has bled viewers for years as they cut the cord and signed up for streaming services.

AT&T's initial response to the streaming shift, Direct TV Now, was a bundle of channels that still cost $50 to $70 per month, making it far too pricey and complex to challenge Netflix, Disney's Hulu, and other streaming services.

AT&T subsequently rebranded DirecTV Now as AT&T TV Now, but at an even higher price range of $65 to $135 per month (with HBO bundled with the top-tier plans). But to make things even more confusing, AT&T launched Watch TV, a bundle of over 35 streaming channels that cost $15 a month, and HBO Max, which bundles together content from HBO and WarnerMedia for $15 a month.

There's also HBO Now, which only streams HBO content, and DC Universe, a legacy platform it gained from Time Warner. Selling DirecTV's assets -- which include a fading satellite business and excess channels -- would allow it to focus its streaming efforts on its HBO and Warner content instead.

2. It would reduce its debt

AT&T's purchases of DirecTV, Time Warner, and AWS-3 spectrum licenses significantly increased its long-term debt, which stood at $147 billion last quarter. AT&T sold some of its assets -- including its cell towers, data centers, and its stakes in the Game Show Network and Hulu -- to reduce its debt load in recent years, but selling DirecTV would significantly accelerate the process.

AT&T already suspended its buybacks in March to conserve its cash and protect its dividend as the COVID-19 crisis paralyzed Time Warner's media business. AT&T will likely take a loss on DirecTV's sale related to shedding millions of subscribers since its initial purchase, but a sale would significantly boost AT&T's free cash flow -- which fell 34% annually to $3.9 billion last quarter -- and give it more breathing room for its expansion, dividend, and debt management plans.

3. It gives the new CEO a fresh start

AT&T's longtime CEO Randall Stephenson will retire on July 1 and hand the reins over to COO John Stankey. Stankey joined AT&T in 1985 and was groomed to be Stephenson's successor, but several top investors -- including activist hedge fund Elliott Management -- expressed doubts about Stankey's ability to unify the company's fragmented streaming media efforts.

Elliott Management subsequently softened its tone and stated it "supports" Stankey as AT&T's next CEO, but dumping DirecTV could make things considerably easier.

Stankey recently declared AT&T "will continue to offer satellite and DirecTV where it has a rightful place in the market, places where cable broadband is not as prevalent," at a Morgan Stanley conference in San Francisco.

Those plans, along with AT&T's rebranding of DirecTV Now as AT&T TV Now, indicates the company will downsize the brand instead of selling it. That's an odd choice, since AT&T arguably doesn't need DirecTV's shrinking base of subscribers, satellite TV network, and bundled channels.

AT&T would be admitting defeat by selling DirecTV, but the choice would reduce its debt and free up resources to improve its HBO and WarnerMedia segments. But for now, DirecTV remains an albatross around its neck.