Please ensure Javascript is enabled for purposes of website accessibility
Log In Help Join The Motley Fool
Free Article Join Over 1 Million Premium Members And Get More In-Depth Stock Guidance and Research
By Billy Duberstein – Jun 1, 2020 at 8:30AM

The beauty retailer had to rapidly shut stores over COVID-19 and is now slowly reopening.

Traditional retailers of all kinds have been hit hard by the COVID-19 outbreak, and investors are starting to get a picture of how bad the damage is. Of course, e-commerce companies have been benefiting from stay-at-home orders, leading to defined "haves" and "have-nots" in the overall retail industry.

Somewhere in between the two is Ulta Beauty (ULTA -0.66%). Ulta's beauty products aren't necessarily a consumer staple, but makeup and cosmetics tend to be more resilient to downturns than apparel or other forms of consumer discretionary purchases, because of the low price point and emotional connection consumers have for makeup. In addition, Ulta has a robust e-commerce and omnichannel business, which helped stem the bleeding of store closures last quarter.

However, Ulta Beauty showed that its model wasn't totally resilient to the instant shutdown, reporting a $78.5 million net loss in the recent quarter ended May 2. Still, management pointed to some signs of life in more recent days as stores have reopened. 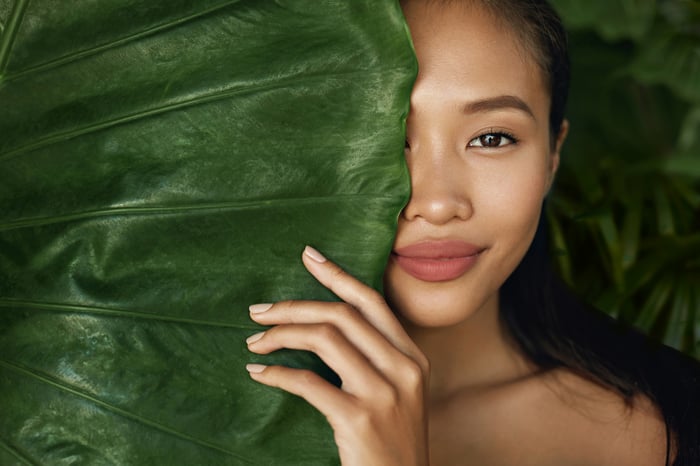 Profit drop was bigger than thought

During the quarter, which was almost half "normal" and half "quarantine," Ulta reported some ugly numbers. Comparable store sales fell 35.3% and overall sales fell 32.8%. Gross margin plummeted by 11.1 percentage points, as Ulta kept paying some salon stylists. While e-commerce sales more than doubled, e-commerce is currently lower margin and made up only 20% of overall sales before the crisis. Thus, the lower sales was too much for Ulta's current cost base, sending results into the red.

One way Ulta adjusted throughout the quarter is for customers to receive products from stores by the curbside. The buy-online, pick-up-in-store option helped boost e-commerce sales, and Ulta expanded the BOPIS option through about two-thirds of its total stores gradually throughout the quarter. Currently, 840 Ulta Beauty stores offer curbside pickup, 333 stores are open to guests, and 283 of these stores have reopened their salon services. Management noted that as stores offered more services, things have gradually begun to pick back up.

While the current quarter's numbers were fairly ugly, management also noticed some optimistic green shoots that, if they continue to improve, could point to more of a recovery. Analyzing the first 180 stores that had reopened, management said that comparable-store sales, on an omnichannel basis, was about flat from last year, with some locations doing better, and others still lagging. Though 180 stores is less than 15% of Ulta's store fleet, it's still a somewhat promising sign that some stores are back to full strength.

Ulta also saw a 2% increase in its UltaMATE rewards program members year over year, but "active" members were actually down about 3.5% from 34.3 million posted in the prior fourth quarter. I'm not sure how Ulta calculates an "active" member, but it's a fair guess to say that some UltaMATE members ceased purchasing makeup during the quarter but may return as quarantines end and the economy reopens.

Ulta also noted a big pickup in usage of its digital tools, such as GLAMlab, a technology Ulta purchased in 2018 and which allows customers to try on makeup virtually. Since the crisis began, Ulta reported a fivefold increase in the use of the tool, which could enable increased engagement with Ulta's brand. In addition, with lots of customers trying out Ulta's e-commerce for the first time, management was also keen to point out that e-commerce guests spend both online and in-store, and at three times the rate of customers who don't use e-commerce. Therefore, hopefully those new to Ulta's e-commerce tools increase their spending at the retailer even as stores reopen.

Finally, Ulta said it was looking to play some offense as the industry is somewhat in tatters. The company will be pulling forward the construction and opening of its Jacksonville distribution center to bolster e-commerce offerings, invest in ship-from-store capabilities, and implement even more technology to streamline its business and engage with customers digitally. Management is also looking to augment its products in on-trend categories like skin care and wellness, as the makeup category (about half of sales) slows down.

But all is not clear

While Ulta should be a survivor of this crisis, investors should be cautious in the near term. After all, the near-term results were worse than expected, and the stock has already nearly doubled off its March lows.

Still, Ulta remains a leader in its niche, which should survive the current recession. And if management can play some offense by digitally engaging guests and taking market share from harder-hit competition such as department stores, Ulta could eventually emerge stronger than ever, though it may not see a return to prior profit levels for a few quarters, or even years.