Please ensure Javascript is enabled for purposes of website accessibility
Log In Help Join The Motley Fool
Free Article Join Over 1 Million Premium Members And Get More In-Depth Stock Guidance and Research
By David Jagielski – Jun 2, 2020 at 7:03AM

These dividend stocks can produce significant income without putting your portfolio in harm's way.

Dividend yield is an important factor investors consider when choosing a dividend stock to invest in. A high yield might be unsustainable, while a low one might not be enticing enough to attract investors. The typical yield from an S&P 500 stock is about 2% per year. However, investors can still do better than that without putting their portfolios at risk. Here are three stocks paying more than 3% that are safe buys today.

AbbVie (ABBV 0.36%) is a global drug manufacturer that got a whole lot stronger and more diversified this year. On May 8, the company officially completed its acquisition of Allergan. The $63 billion deal will give AbbVie access to Ubrelvy, a key migraine drug the Food and Drug Administration (FDA) approved in December. 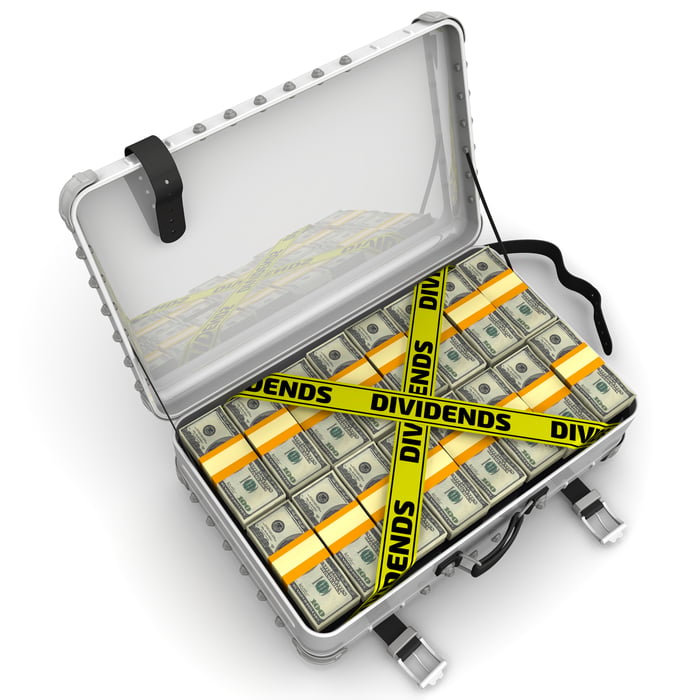 With the acquisition, AbbVie is a stronger company, and that's great news for dividend investors, especially during the COVID-19 pandemic. It's a Dividend Aristocrat that has increased its dividend for more than 40 years in a row, including back when it was part of Abbott Labs. Currently, it pays a dividend of $1.18 per share, which yields 5.2% annually. The North Chicago-based company has increased its dividends by 195% since its inception in 2013.

Public Storage (PSA -1.15%) is a real estate investment trust (REIT) that's in the self-storage business. According to its website, it's the largest such operator in the entire world, with more than 170 million net rentable square feet. Self-storage can be incredibly valuable during the COVID-19 pandemic if people who have been impacted by job cuts need to downsize their living spaces -- putting items into storage can help them do that.

As a REIT, the company is required to pay out at least 90% of its net income to shareholders. The good news for investors is that Public Storage hasn't had a problem producing a strong profit. In 2019, its funds from operations (FFO) per share were $10.58, which grew from $10.45 in 2018 and $9.70 in 2017. FFO is what investors typically look at instead of net income when evaluating REITs.

The Glendale-based company released its first-quarter results of 2020 on March 31. In Q1, Public Storage reported $2.61 in FFO per share, up from $2.52 in the prior-year period. It's still doing well during the pandemic, but the company concedes that sales will likely drop from 2019.

However, with strong profits, the REIT still looks to be in great shape today. Currently, the company pays a quarterly dividend of $2 per share, which pays 4% per year. Public Storage last increased its dividend back in 2016.

In the news release, the company's chairman and CEO, Mike Roman, credited 3M's diversity of products as one of the key reasons for its mixed results during the pandemic. In Q1, its healthcare segment saw revenue growth of 21% from the prior-year period, while safety and industrial product sales fell by 1%. Transportation and electronic revenue saw a 5% dip from the same time last year.

Dividend investors prefer diverse businesses, which are much more versatile than those that depend on just one industry or sector of the market. In 3M's case, that isn't a concern. 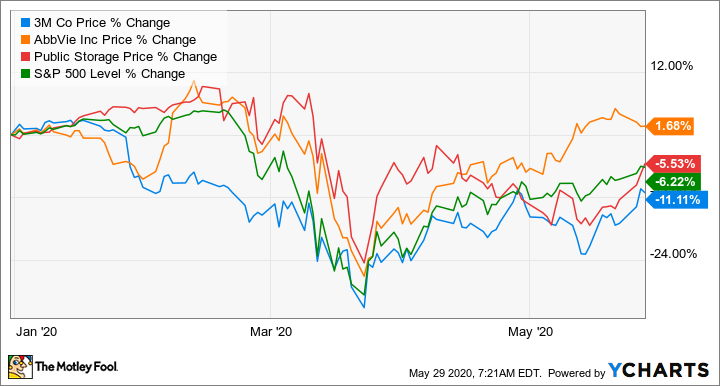 AbbVie is the only stock that's positive, with a return of more than 1% year to date.

There are some good options here for investors. If you want to get the most bang for your buck, AbbVie looks to be the best buy today. Not only does it pay the highest yield, but it's also got a strong track record for increasing its dividend payments over the years. And now that the healthcare company has gotten stronger as a result of its recent acquisition, its future might be even more stable than before.