Please ensure Javascript is enabled for purposes of website accessibility
Log In Help Join The Motley Fool
Free Article Join Over 1 Million Premium Members And Get More In-Depth Stock Guidance and Research
By Adam Levy – Jun 3, 2020 at 10:20AM

YouTube is working to attract traditional TV advertisers amid the changing environment.

Alphabet (GOOG -1.98%) (GOOGL -1.82%) thinks it has an under-utilized option for television advertisers looking for a cost-effective way to reach customers during the coronavirus pandemic. It thinks time spent streaming YouTube on television sets is under-monetized, and it could serve as a better way to spend ad budgets previously earmarked for traditional TV. That's why it's ramping up efforts to attract traditional TV ad budgets, according to a report from The Wall Street Journal.

There's a huge shift in television advertising going on right now. Many advertisers are pulling back on previous upfront commitments to television networks, and the upfronts for this fall have been delayed indefinitely with the amount of uncertainty facing the economy and production schedules.

European TV ad revenue fell 50% in April, and the U.S. isn't holding up any better. First-half sales will decline 22% to 29% overall, according to eMarketer, $10 billion to $12 billion below its previous forecast.

While digital ad sales are also declining, they're holding up much better than TV. But the largest streaming video service in the world, YouTube, doesn't think it's getting a fair shake of TV ad budgets as they shift to digital. 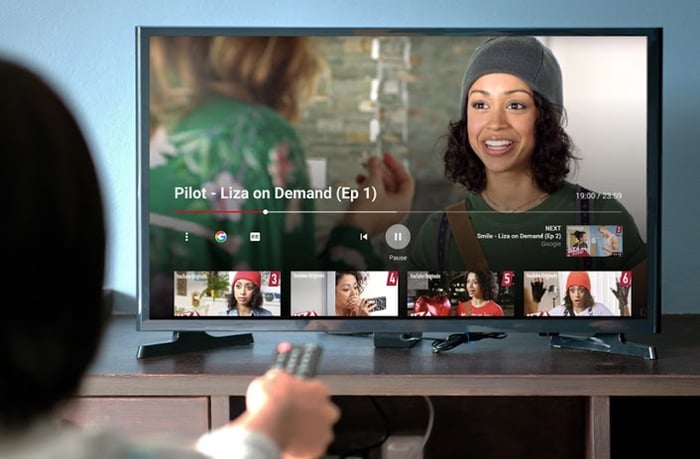 Not just for mobile advertising

On mobile, viewers are generally much more engaged. Therefore, mobile advertising messages can make calls to action with relative success.

But a call to action for a TV streamer isn't going to get the desired result. TV streamers are much more passive. They're not going to click through to make a purchase or download an app or even "learn more" on a TV. So marketers can't use the same ad campaign across YouTube for mobile, desktop, and television viewing.

The goal is to attract some of the $10 billion-plus in ad spend that's leaving traditional TV, while advertisers look for cost-effective ways to reach consumers and promote their brands while consumers aren't spending very much.

YouTube isn't just competing with TV, it's competing with Disney, which has a growing advertising business for the premium content on Hulu and ESPN+. It's competing with Roku and Amazon, which offer access to premium digital ad inventory through their connected TV platforms. The quality of the content is largely the same as that found on TV.

But YouTube content is all over the map with the bulk of videos on the platform being amateur recordings shot on webcams and smartphones. Marketers aren't going to value an advertisement displayed before a home video the same as an ad in the middle of a professionally produced television show. As such, YouTube may have trouble growing its share of connected TV ad spending relative to the aforementioned competitors.

YouTube advertising on TV is still a sizable opportunity for Google. Marketers spent $6.9 billion on connected-TV advertising in 2019, and that number's expected to double by 2023, according to eMarketer. And with more ad dollars moving away from traditional TV this year than expected, that growth may accelerate as advertisers look for new ways to reach audiences.

The market is getting pretty big, especially considering that YouTube generated $15 billion of gross ad revenue last year. Higher-priced connected TV advertisements could produce the type of ad revenue growth investors are seeking from YouTube. Ad sales climbed 33% last quarter, an acceleration from the fourth quarter, but a slowdown from last year.

Standing out from the competition will be a challenge for YouTube, and it'll only get more difficult as more media companies introduce ad-supported video streaming services. But its position as the market leader and its ties to Google give it a great opportunity to capture the growing market for premium connected TV ad spending.