Please ensure Javascript is enabled for purposes of website accessibility
Log In Help Join The Motley Fool
Free Article Join Over 1 Million Premium Members And Get More In-Depth Stock Guidance and Research
By Anne Burdakin – Updated Jun 4, 2020 at 8:10AM

Microsoft and ANSYS use digital twinning to bridge the physical and digital worlds.

Not long ago, it seemed too futuristic to calculate life spans of industrial equipment under a variety of scenarios in real time. Today, it's not only possible, but it's also changing the way manufacturing works. By integrating cloud capabilities with the industrial Internet of Things (IoT), digital twinning can be achieved, allowing experimentation with variables in real time to predict outcomes.

Two powerhouses in their respective fields have linked up to help manufacturing become faster and more cost-efficient. Microsoft's (MSFT -1.27%) Azure Internet of Things (IoT) cloud system is connecting production lines to engineering teams. ANSYS (ANSS -1.08%), is making that data dynamic and available for manipulation. The resultant digital twin creation of objects or environments are used to try out virtual working alterations in real time.

Investors should pay attention to this trend because just as robotic surgery company Intuitive Surgical was a disruptor and changed surgery forever, digital twinning is just beginning to disrupt and change everything in the IoT universe, from manufacturing to running a city to healthcare forever. This could be a great opportunity for the informed and plugged in' investor.

For the third year in a row, Gartner (IT -1.44%), a research and advisory firm, has identified digital twinning as one of the top 10 strategic technology trends. According to Gartner, 13% of organizations that are implementing IoT have already adopted digital twins, and 62% are in the process or plan to do so. Gartner predicts a tipping point in 2022 when two out of three companies will have deployed at least one digital twin to optimize some facet of their business processes.

In manufacturing, digital twins can help equipment operators anticipate breakdowns, refining maintenance timing and reducing unexpected maintenance shutdowns, thereby dramatically lowering costs. The process is a simulation that allows engineers and designers to create virtual replicas of physical systems and devices, then introduce variables such as temperature, speed, and pressure. Digital twinning is different from creating a computer aided design (CAD) model in two ways: its real time connectivity and its variance, or ability to dynamically change the object's design and operating conditions. 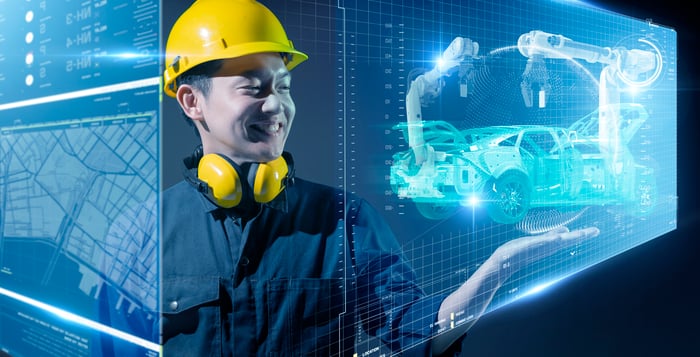 Headquartered in the U.S., ANSYS has 50 years' experience in simulation engineering, and specializes in 3D design software and modeling systems. Its advanced simulations in digital twinning can streamline automation and engineering processes.

Unlike more traditional virtual designs, like those from CAD, digital twins can be tested alongside the physical systems they're mirroring, and they allow engineers to perform predictive maintenance and test for faults before they have a chance to arise.

The Microsoft and ANSYS product is not the only one of its kind. Other partnerships are being formed as a number of companies begin to adopt digital twins into engineering and manufacturing systems. Rockwell Automation's (ROK -2.33%) Digital Partner Program helps industrial clients to optimize manufacturing. Microsoft and ANSYS are included in Rockwell's Partner Program, along with Accenture (ACN -0.89%); PTC (PTC -3.02%); and EPLAN, part of the German family business Friedhelm Loh Group.

Is digital twin technology a game changer for investors?

A MarketsandMarkets report updated in January estimates that the digital twinning market had a value of $3.8 billion in 2019, and will reach $35.8 billion by 2025, at a compound annual growth rate (CAGR) of 45.4%.

As often happens with new technology, many companies are unclear about the economic benefits and investments involved. Calculating the advantages of digital twinning can be daunting, further complicating adoption of the technology, and slowing company adoption.

But the financial losses incurred by downtime in manufacturing can motivate executives to look closer at digital twinning. For instance, for CNH Industrial (CNHI -3.21%), which manufactures power trains and agricultural, industrial, and commercial vehicles, a minute of downtime can cost more than $160,000. The deployment of digital twinning identified the most crucial areas and helped CNH reduce expensive downtime and streamline operations.

Anybody who has a digital twin is able to first remote the control plane [the spatial network where variables will be applied], is able to automate, is able to simulate. That's huge for anybody who is into manufacturing or is trying to model out and plan their supply chain. So I think that there are ways for us to participate in what ultimately will be productivity growth. But our immediate term, we are mostly building out the relationships, adding new customers, adding intensity in usage in existing relationships, which all in the long term will play out in terms of economics for us as well.

As Nadella pointed out, relationship-building with potential customers is under way, and groundwork is being laid for sales through education. The digital twinning partnership between Microsoft and ANSYS just became effective in 2020 and is in the early phases of customer adoption.

Microsoft and ANSYS are well positioned as manufacturing disruptors offering digital twinning technology. But they are separate companies with widespread operations for investors to consider. The partnership just began in 2020 and the companies aren't breaking results out yet.

So how can we anticipate whether or not digital twinning technology will move the investment needle?

ANSYS's May 7 investor presentation tells us the company is twice as big as its nearest competitor, is number one globally in simulations, and has an 85.9% global satisfaction rating.The technical quality of the company is very high, and now it is partnered with one of the most powerful cloud companies in the world.

Microsoft is in a battle for cloud dominance with Amazon Web Services (AWS). A Goldman Sachs (GS -3.50%) survey released in Jan. revealed Microsoft Azure has an edge over AWS at big companies. The survey, conducted each June and December, shows Microsoft's lead across cloud infrastructure and platform as a service combined has been increasing since December 2017.  Additionally, in three years more executives expect their companies to be using Azure than any other cloud service.

"(Survey) Respondents expect today's top vendors to continue to dominate the rankings in three years. Microsoft remains the clear leader, with 22% of the votes today and in three years respectively," the Goldman Sachs analysts wrote.

There are other companies in the digital twinning space, some with narrow specialties, some not. But the partnership between Microsoft and ANSYS uniquely aligns individual powerhouse companies able to rapidly shift the technical applications of digital twinning to different industries, spurring rapid growth.