The decision came as the result of a natural disagreement between the scientists and the investors.

At drug companies, when new clinical trial data becomes available, there's typically a tug-of-war between the scientists and the investors. The people doing the research and development want to hold onto their data until it's properly ready for publication because most of the premier journals won't publish data that's been previously reported. Investors, on the other hand, want to see the data as soon as possible because it affects the prospects for the company.

The compromise is usually that some top-line data gets released early, but not nearly enough to satisfy investors. Such was the case for Moderna (MRNA 2.12%) when it released data for just eight of the 45 participants in the phase 1 clinical trial testing its SARS-CoV-2 vaccine, mRNA-1273.

"The NIH is running the study, and they want to be able to publish the data," CEO Stephane Bancel explained Wednesday at the Jefferies 2020 Healthcare Conference, which was held virtually.

Nevertheless, Bancel and Moderna's board of directors felt the data on the first eight patients had to be released, "We were worried that with so many people aware of the data that it was not possible for the company to fulfill our obligation to ensure that we have no material information leaving the company." 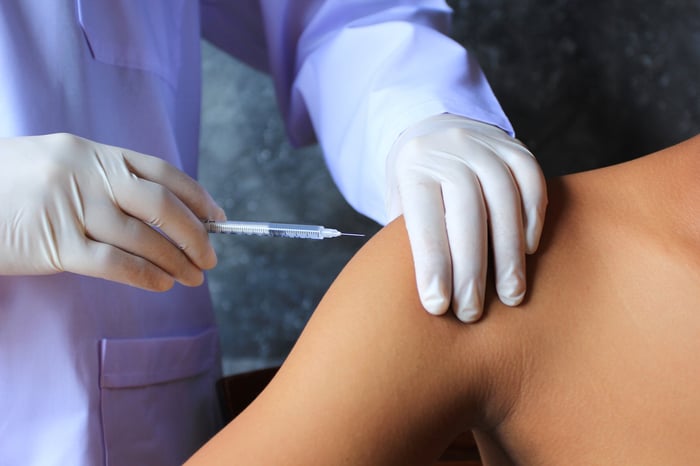 Bancel noted that the data might be released by the NIH in a non-peer-reviewed format before being formally published, although that's outside of Moderna's control.

The company has already started a 600-patient phase 2 clinical trial for the vaccine and expects its phase 3 study to start in July.

Bancel said it's possible that Moderna could get an Emergency Use Authorization (EUA) from the Food and Drug Administration based on the phase 2 data. The EUA would likely only cover people whose need for protection from COVID-19 is the most pressing -- healthcare workers and perhaps some other categories of essential workers -- although Bancel noted that supplies of mRNA-1273 will likely be constrained at that point, so the company couldn't offer vaccinations to everyone even if the FDA signed off on a broader authorization.