Please ensure Javascript is enabled for purposes of website accessibility
Log In Help Join The Motley Fool
Free Article Join Over 1 Million Premium Members And Get More In-Depth Stock Guidance and Research
By James Brumley - Jun 4, 2020 at 7:45AM

By pulling all the levers at its disposal to limit inventory, the department store chain has freed up future time and money.

There's no sense in dancing around the issue -- the past several weeks have been miserable for retailers. Coronavirus-related shutdowns have kept consumers out of stores, worsening an already-difficult situation for most of these companies.

Nordstrom (JWN 1.23%) hasn't been immune to the impact. While revenue fell 39% year over year and the department store chain swung to a pre-tax $821 million loss for its quarter ending in early May, that's not out of character compared with its peers in these unprecedented times.

Still, Nordstrom did shine in one very important way that points to an impressive degree of inventory control. It didn't end last quarter with a mountain of merchandise, doing what too many other department store chains weren't able to do. 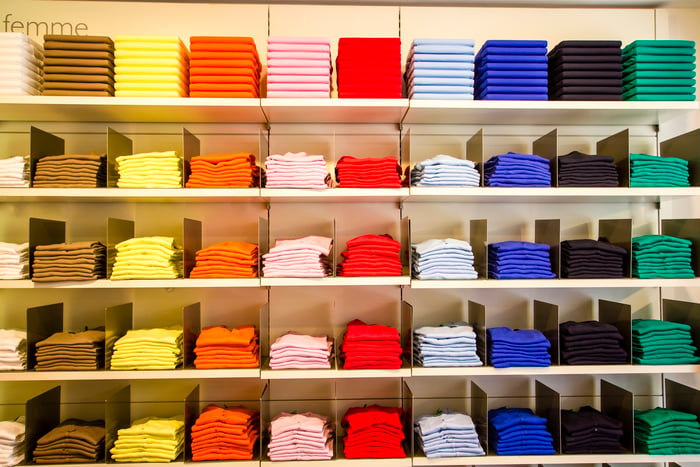 It's an often-overlooked aspect of retailing. Inventory must be managed properly if a store is to survive. Too much of it, and too much money is tied up in goods that lose value the longer they sit unsold on the sales floor. Too little of it, and shoppers can't find what they want to buy.

Every retailer's past few months have been relatively disastrous, of course, with COVID-19 shutting down shoppers as well as supply chains in March with little to no warning. It can take months to procure, stock, and then sell any particular item in a store. Retailers had only days to respond in March, and it just wasn't enough time to make the ideal inventory adjustments.

Given the circumstances, though, Nordstrom did about as well as anyone had a right to expect. In step with the near-40% plunge in sales, inventory levels fell 26% from $2 billion a year earlier to just under $1.5 billion for the three-month stretch ending on May 2. 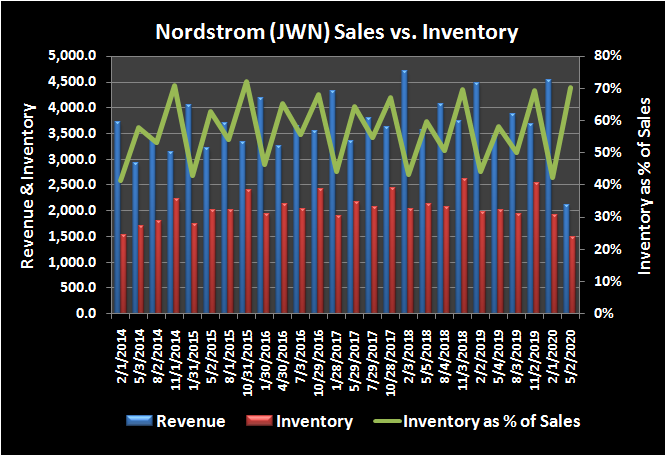 For the sake of comparison, Kohl's (KSS -0.78%) matched its 43% decline in sales for the quarter ending on May 2 with a less impressive 3% dip in inventory levels. 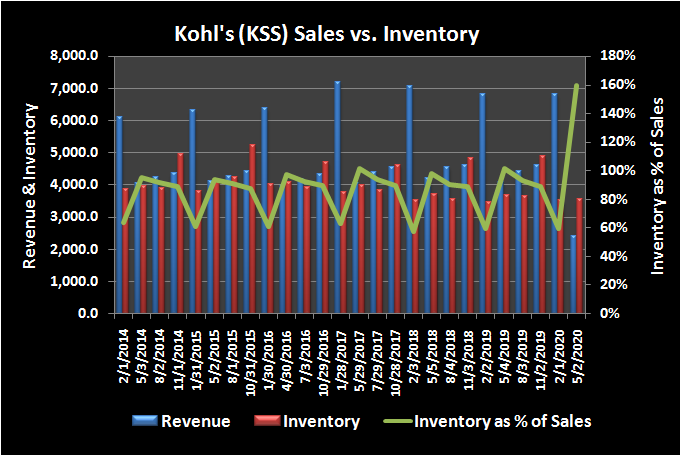 Dillard's (DDS 3.75%) first fiscal quarter also ending on May 2 indicated a 46% plunge in merchandise sales, and only a 20% decline in inventory levels. 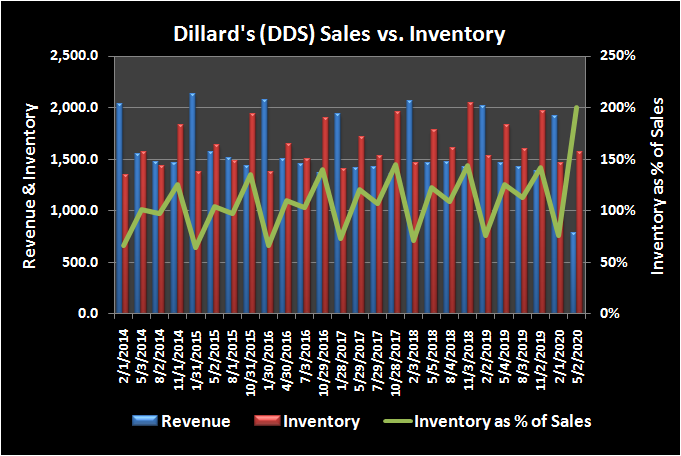 The $64,000 question: What was Nordstrom able to do last quarter that most other department store chains (so far, anyway) couldn't? CFO Anne Bramman briefly touched on the matter during the Q1 conference call, explaining, "In mid-March, our teams moved quickly to realign inventory, reducing receipts by approximately 80% in April and May." The company also made a point of using stores themselves as fulfillment centers for online orders.

The real takeaway for investors is, however, not what Nordstrom did with its inventory receipts, but what it was even capable of doing. Canceling 80% of receipts planned for delivery in April and May is no small matter. Nordstrom really has control of its merchandise flow, and better still, it knew how and when to flip that switch to the "off" position.

One quarter doesn't make a trend. On the other hand, the supply chain that Nordstrom turned almost completely off in April and the fulfillment process that turned stores into warehouses in the midst of nationwide shutdowns weren't developed in just one quarter. The stellar inventory management is the result of work done over the past couple of years now, as the store chain has sought to reinvent itself for relevancy in a web-dominated, instant-gratification-minded world. CEO Erik Nordstrom commented during last quarter's earnings call that the "drastic changes we're seeing with our business through this crisis is really an acceleration of what's been in place before."

The ultimate upside is still the same, though. That is, Nordstrom had inventory flexibility when it needed it the most. This leaves it well-positioned for financial flexibility coming out of the contagion's grips, whenever that might be. While rival stores will be saddled with spring (and some summer) inventory that will require above-average markdowns to sell in late summer into early fall, Nordstrom has already shed much of this inventory and has already collected some revenue for it, even if it took more markdowns than it normally would have.

Perhaps most compelling about the actions taken during the recently completed quarter, though, is that they proved Nordstrom's internal mechanism for in-store fulfillment and the movement of merchandise from full-price to off-price venues works well. No other major department store retailer seems as well-equipped in this regard. The sales/inventory charts above indicate this isn't exactly new.

It's another reason to believe Nordstrom will survive the retail apocalypse that could claim even more stores in the wake of coronavirus shutdowns.