Please ensure Javascript is enabled for purposes of website accessibility
Log In Help Join The Motley Fool
Free Article Join Over 1 Million Premium Members And Get More In-Depth Stock Guidance and Research
By Matthew Frankel, CFP® - Jun 7, 2020 at 8:00AM

Money isn't everything. If you're a socially conscious investor, it isn't all about bottom-line earnings or a company's recent sales growth. Those things are nice to have, but many investors -- especially given recent events -- want to use their capital to support companies that are helping to lead the charge toward social justice.

With that in mind, here are seven of my favorite stocks, all of which have recently announced new efforts toward bringing about societal change, especially when it comes to improving racial equality. They're listed in no particular order along with some of the recent actions they've taken: 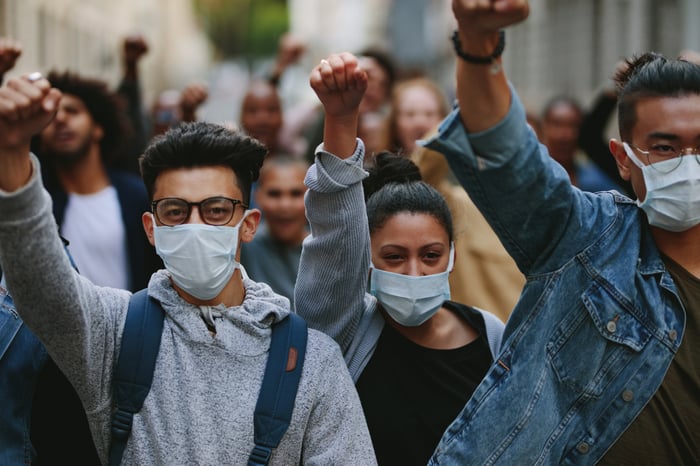 In a recent press release, Bank of America (BAC 1.28%) CEO Brian Moynihan announced that the banking giant would pledge $1 billion to help fight racial inequality, with the money going to community programs and minority-owned small businesses over the next four years.

Underlying economic and social disparities that exist have accelerated and intensified during the global pandemic. The events of the past week have created a sense of true urgency that has arisen across our nation, particularly in view of the racial injustices we have seen in the communities where we work and live. We all need to do more.

It's no secret where Nike (NKE -3.41%) stands on the issue of racial equality. The company made headlines when it showed support for Colin Kaepernick and asked him to be the public face of its ad campaign, encouraging people to: "Believe in something. Even if it means sacrificing everything."

With that in mind, it's only fitting that Nike was very quick to take a stand after recent events unfolded. The company promptly released an ad to share its message:

>> Learn More: Is Nike a socially responsible investment according to an Environmental-Social-Governance (ESG) framework?

Verizon (VZ 0.31%) Chairman and CEO Hans Vestberg recently delivered a message about the company's stance on current events, along with a commitment to donate $10 million. The company's donation will be divided equally across seven organizations, including the National Urban League, NAACP, National Action Network, Leadership Conference for Civil and Human Rights, Rainbow Push Coalition, National Coalition on Black Civic Participation, and the NAACP Legal Defense and Educational Fund.

Amazon (AMZN -1.13%) is making a $10 million donation to various civil rights organizations, much in the same way Verizon is, and the recipients will be selected by Amazon's Black Employee Network (BEN).

Furthermore, Amazon offered a strongly worded statement along with its pledge, which included:

The inequitable and brutal treatment of Black and African Americans is unacceptable. We believe Black lives matter. We stand in solidarity with our Black employees, customers, and partners, and are committed to helping build a country and a world where everyone can live with dignity and free from fear.

Having said that, Amazon's track record isn't a perfect one. The company recently fired the warehouse worker who organized a walkout over the company's COVID-19 protections for workers and proceeded to plan to smear the employee according to a leaked internal memo. However, the company's response to the recent events has certainly been a step in the right direction.

When you think of "socially responsible businesses," investment-banking giant Goldman Sachs (GS 0.58%) might sound like a surprising choice. However, Goldman has been more socially conscious than you might think. The company created a $30 million COVID-19 relief fund, just to name one current example.

The firm recently announced the creation of the Goldman Sachs Fund for Racial Equity, which will help support the work of organizations dedicated to fighting racial injustice and structural inequality. Goldman is initially launching the fund with $10 million from its Goldman Sachs Gives fund and is matching employee contributions to the new fund dollar for dollar.

Not only did insurance giant UnitedHealth (UNH 0.12%) pledge to donate more than $10 million to help neighborhoods affected by recent riots, but the company also said it will pay for George Floyd's children to go to college. Five million dollars of the donation will go to the YMCA Equity Innovation Center of Excellence for the specific purpose of helping to address the underlying societal problems we're facing.

Not too long ago, Starbucks (SBUX -1.03%) was in the spotlight for racial equality issues itself. In April 2018, two young African American men, who were in a Starbucks cafe for a business meeting, were led out of the store in handcuffs after a manager called the police. While this is certainly a horrifying incident, Starbucks' response was the real story. Instead of dismissing it as an isolated incident or making vague promises to work on its culture, the company decided to close more than 8,000 stores in the U.S. for a day to conduct anti-bias training about a month later.

Starbucks is bringing its philosophy to the current situation. The company recently held an inclusion forum with about 2,000 of its partners (what Starbucks calls its employees) to help ask the important questions and start an honest conversation in the hope of moving forward toward the solutions.

There's still much work to be done

Each of these companies is taking steps to fight racial inequality, but it's important to mention that while these are commendable moves, there's still lots of work to be done. In the corporate world, just three Fortune 500 company CEOs are African American, to name one example of a problem that needs to be addressed.

Furthermore, it's important to mention that we want to support companies that are both doing the right thing and are solid businesses to invest in. To learn more about the popular framework for assessing whether a company is doing the right thing in regards to environmental, social, and governance issues, you can read our thorough primer on ESG Investing.

As a final thought, it's important to mention that these are just seven of my favorite companies that happen to be making strides toward promoting and/or supporting racial equality and justice. There are many other great companies, both public and private, that are also making large donations, changing some of their business practices, or are taking other steps to help solve the problem.

Many, like Disney (DIS -0.90%), are matching employee donations to civil rights organizations. Others, like General Motors (GM -2.50%), have announced steps to improve their own inclusion practices.

If you'd like to invest in companies moving in the right direction toward racial justice and equality, you have plenty of choices.