Please ensure Javascript is enabled for purposes of website accessibility
Log In Help Join The Motley Fool
Free Article Join Over 1 Million Premium Members And Get More In-Depth Stock Guidance and Research
By Adam Levine-Weinberg – Jun 7, 2020 at 9:05AM

After tripling in the span of three weeks, Spirit Airlines stock may need to take a breather.

The COVID-19 pandemic hit U.S. airline stocks hard earlier this year: none more so than Spirit Airlines (SAVE -4.24%). Shares of the budget carrier changed hands for nearly $45 as recently as mid-February. Within weeks, Spirit Airlines stock had plunged into single-digit territory, hitting an all-time low of $7.01 on March 19.

As recently as May 15, Spirit Airlines stock closed at $8.01, within striking distance of its mid-March low. But the stock has rallied furiously ever since. Over the following six trading days, shares of the budget carrier gained more than 50%, reaching $12.31. The next seven trading days were even more spectacular, as the stock rallied another 71%, reaching $21.02 by the end of the day on Thursday. The stock then skyrocketed as much as 23% on Friday, topping out at $25.94, before retreating to end the day at $22.62. Spirit Airlines stock has now more than tripled off its 2020 low. 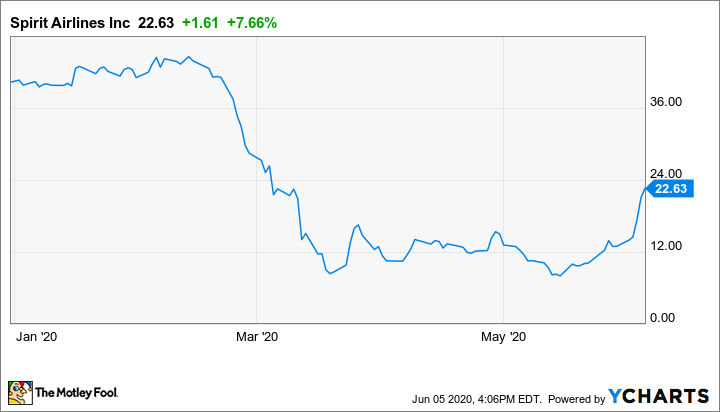 There were good reasons for Spirit Airlines' recent rally, as investors have been too pessimistic about the company's prospects in recent months. That said, further gains will be harder to come by, and will depend on Spirit's ability to resume its growth and boost its pre-tax margin back into double-digit territory.

Sequential improvements in air travel demand are a big reason why Spirit Airlines stock and other airline shares are rallying. On Thursday, 391,882 people passed through TSA checkpoints, the highest daily total since March. At the worst point of the crisis, the TSA was only processing about 90,000 people per day.

Among U.S. airlines, Spirit Airlines is relatively well positioned to capitalize on improving demand. It has the lowest unit costs in the U.S. airline industry and benefits from substantial ancillary revenue streams. That means Spirit can be profitable while offering extremely low fares to appeal to budget-conscious consumers. Additionally, it primarily serves leisure travelers, and leisure demand is returning much faster than business travel. Lastly, Spirit has a broad point-to-point route network, which should enable it to be nimble with respect to restoring capacity based on how quickly particular markets are recovering.

There are already signs of improvement. In Fort Lauderdale -- its biggest base of operations -- Spirit plans to operate 70% of its pre-coronavirus capacity in July, compared to less than 10% in May. In Las Vegas (another key focus city), Spirit Airlines plans to increase service to 39 flights a day in July, up from just five daily flights a few weeks ago. On the other hand, while demand for air travel is starting to return, TSA screenings were still down 85% year over year on Thursday. That's a big improvement from down 96% in mid-April, but the industry is still in the early innings of the recovery. Despite its low cost structure, Spirit Airlines has significant fixed costs: particularly interest expense and lease liabilities. Until it can fully utilize its assets with reasonable fares and high load factors -- which won't happen until demand gets much closer to 2019 levels -- there's no way that it can return to profitability.

Don't count on a straight-line recovery

The outlook for Spirit Airlines stock depends in large part on the future pace of the recovery. Many investors appear to be betting on a steady continuation of the past month's momentum. In such a "straight-line" recovery scenario, air travel demand would rebound to more than a third of 2019 levels by the end of the summer, about two-thirds of 2019 levels by year-end, and would fully recover by this time next year.

However, the recovery is unlikely to be this smooth. July is the peak of the summer travel season. Furthermore, people who are less worried about the pandemic have been eager to get back to traveling. For the recovery to continue at a rapid pace beyond the summer, Spirit Airlines and its peers will need to attract customers outside of peak vacation season and will need to convince people who have been more worried about the virus to start flying again.

An even bigger risk is the possibility of a second wave of the pandemic later this year, leading to new travel restrictions. COVID-19 cases have started rising again in many of the states that were quick to reopen their economies, according to The New York Times, highlighting this risk.

Even after the recent rally, Spirit Airlines stock sits about 50% below its 2020 highs. That would seem to indicate a significant discount to account for the risk of a slow profit recovery. However, this doesn't reflect the full extent of the recovery in Spirit Airlines' valuation.

A month ago, Spirit Airlines issued both equity and convertible debt to shore up its balance sheet. It sold 20.125 million shares for $10 each and $175 million of convertible debt that can be converted to stock at a price of approximately $12.75 per share. Together, these actions netted $362 million for the company, buying much-needed time for business to improve.

Assuming immediate conversion of the convertible debt, Spirit Airlines' share count would now stand at 102.4 million, compared to 68.5 million previously. This 49% increase in the share count means that at Spirit Airlines stock's Friday intraday high of $25.94, the company's market cap was within about 3% of where it stood in January.

Spirit Airlines stock still has plenty of long-term upside, assuming that business goes back to normal within two or three years and the airline becomes a high-growth company with solid margins once again. Yet this upside is now evenly balanced against the risk of the COVID-19 pandemic getting worse before it gets better, which could force Spirit to take on additional debt and dilute existing shareholders even further. Investors may find bigger bargains elsewhere.