Short-sellers are pointing out some reasons they think the shares are about to crash.

Shares of kids' entertainment content developer Genius Brands International (GNUS 1.59%) were down 12.3% at 12:54 p.m. EDT on Monday, following the Friday release of a short-selling thesis that the company's stock is wildly overvalued, and could decline 75% from its current value very quickly.

The underlying thesis put forth by Hindenburg Research is that the company is only worth about $1.50 per share, based on its lack of proven results; questions about the value of its key entertainment properties; and expectations that recent financiers would flood the market with shares in the weeks and months ahead, cashing in on the meteoric rise in the company's stock since its capital raise in March. 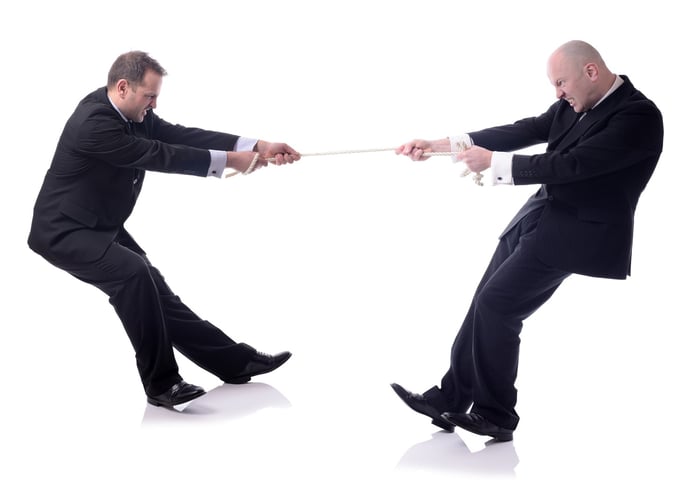 The tug of war between bulls and bears over Genius Brands has started. Image source: Getty Images.

The company issued a response to the short-sellers' report, pointing out its balance sheet strength, with a net cash position that management said would support operations and new content development for at least five years. And management highlighted the coming launch of its Kartoon Channel, new programs arriving soon, and a line of Rainbow Rangers toys being made by Mattel that will hit Walmart stores in August corresponding with the release of the next season of that show.

Hindenburg Research brings up some valid points about the stock. By just about any valuation metric, the shares have become incredibly expensive, and the kids' media company doesn't have a very good track record of delivering profitable results. In the past decade, the company has never had a profitable year, and only one quarter of positive net income: 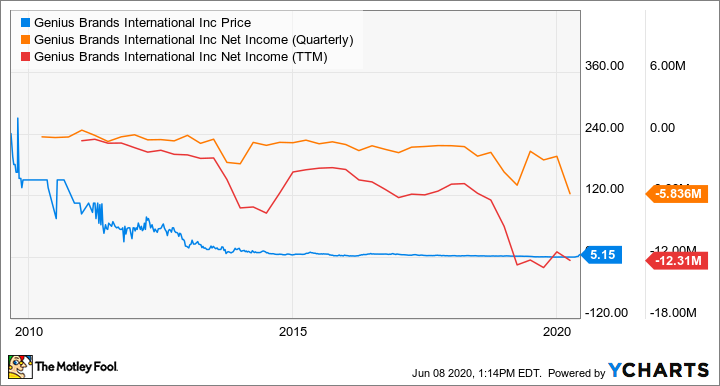 But investors aren't betting on the past, and management says the future looks very bright. The company has added several new executives with impressive track records to run its upcoming Kartoon Channel, which will offer free content and generate revenue from advertisements.

Whether the company can move beyond its past of muddling results without any big hits and finally strike it big with Rainbow Rangers, the upcoming Stan Lee's Superhero Kindergarten, and other content it says is in development remains to be seen. Investors have already started to take some of their profits over the past week, with the share price down more than 35% from the recent high. But the stock is still up more than 1,700% in less than three months.

Put it all together, and there's plenty of risk that Genius Brands stock could indeed come crashing back to earth. Investors are betting heavily that the future won't look like the past, on little more than a few new executives and the promise of new content and properties. Whether the story changes remains to be seen, but it's pretty certain that this stock will be incredibly volatile for some time to come.