Please ensure Javascript is enabled for purposes of website accessibility
Log In Help Join The Motley Fool
Free Article Join Over 1 Million Premium Members And Get More In-Depth Stock Guidance and Research
By John Bromels – Jun 9, 2020 at 9:30AM

Things aren't as bad as expected for oil and gas companies...yet.

Services generalist Halliburton saw its shares rise 11.9%, while the stock of equipment distributor NOW was up 20.8%. Perhaps the biggest winner of the entire oil sector for the month, though, was Nabors, whose shares skyrocketed a jaw-dropping 151.6% in May.

All three companies outpaced the overall oil and gas services sector as measured by the SPDR S&P Oil & Gas Equipment & Services ETF, which was up 11.2% for the month. Meanwhile, the S&P 500 only increased by 4.5% over the same period. Oil prices have a huge impact on shares of oilfield services stocks. Because they are third-party providers of equipment and support to oil and gas producers, they tend to be among the first companies to take a hit when oil prices fall. The conventional wisdom is that if oil producers are making less money (or no money) on each barrel of oil they pump, they'll have less money to spend on third-party providers. That means an oilfield services company will be forced to discount its services or lose business. Either option is bad for its bottom line.

Sure enough, when oil prices collapsed in early March, shares of oilfield services companies tumbled sharply pretty much across the board. These three companies were no exception: 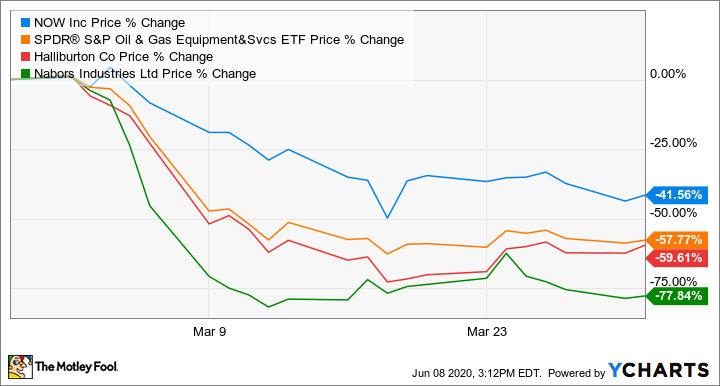 You'll notice that Nabors was hit harder than the other two companies and much harder than the services industry as a whole (the yellow line in the chart above). That's because Nabors focuses on North American onshore drilling rigs. U.S. onshore drilling was particularly hard-hit by the oil price collapse because it mostly consists of shale extraction, which is more expensive than traditional offshore drilling.

For producers to break even on shale drilling, oil prices have to be at least $50 a barrel (and often much more). So when U.S. benchmark WTI Crude tumbled from more than $50 a barrel to just above $20 a barrel by the end of March, lots of U.S. shale drillers announced that they were slashing capital expenses, including cutting shale rigs or even ceasing shale operations altogether. Halliburton, which has more U.S. exposure than its fellow oil services generalists, took a big hit as well.

But what a difference a couple of months can make! WTI Crude started May at less than $20 a barrel, but by the end of the month had soared to more than $35 a barrel. That's still far from allowing most shale producers to break even, but it was enough to spark interest in buying beaten-down oilfield services stocks (or, at least, to scare away some short-sellers). An analyst upgrade for Nabors helped fuel its particularly strong rise.

Don't be fooled by the big gains these stocks saw in May. Year-to-date, all three are still in the red, with NOW shares down 21.8%, Halliburton down 32.9%, and Nabors trailing the pack with a 41.5% decline. Matters are even worse if you look at the last five years: 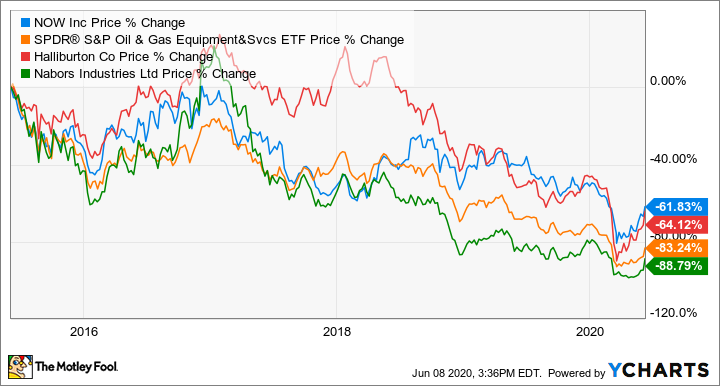 While oil prices have risen to the point that some producers may be able to start eking out a profit from their highest-performing wells, shale drilling isn't there yet, and there are still lingering issues surrounding global oil oversupply and a lack of available storage space. Meanwhile, most oil producers have slashed their 2020 budgets and may need to keep spending low over the next few years, which won't help oilfield services companies like NOW, Halliburton, and Nabors.