The decision comes as part of a broader money-saving initiative by the company.

Cost-cutting by Acreage Holdings (ACRGF) has led it to withdraw from the state of Iowa. Barely two months after it suspended its wholesale operations in the state, the company on Tuesday relinquished its medical cannabis manufacturing license there.

At present, the relatively small and sparsely populated state permits only the sale and consumption of medical cannabidiol (CBD). This is heavily regulated by state authorities.

Acreage, under the brand name Iowa Relief, was one of only two manufacturers of cannabis products in the state. It will leave the other, privately held MedPharm, as the sole operator. 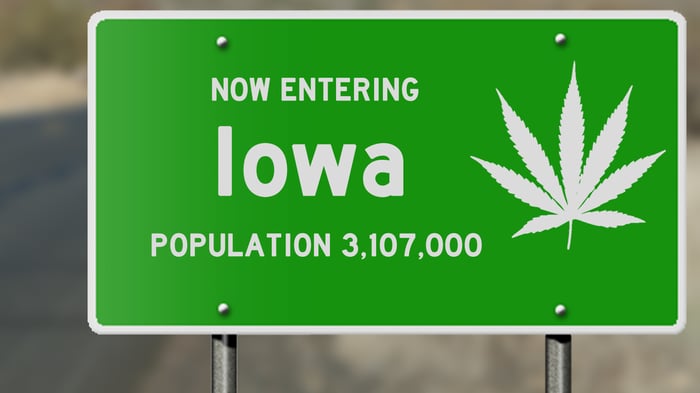 Marijuana Business Daily quoted Acreage Vice President of Communications Howard Schachter as saying that the company's retrenchment "is in keeping with our recent announcement that our focus going forward will be on those markets with the greatest potential for growth."

Like most publicly traded marijuana companies active in the U.S., Acreage had been struggling even before the SARS-CoV-2 coronavirus pandemic. In its wake, the marijuana company announced a raft of cost-cutting measures including employee furloughs and dispensary closures. It also terminated a pair of planned acquisitions.

Earlier this month, Acreage announced it would raise up to $60 million in new capital through a secondary stock flotation and the issue of convertible debentures.

Investors didn't seem happy about the final phase of Acreage's Iowa departure. On Tuesday, the company's stock fell by 4.1%, which was a steeper decline than that suffered by the broader equities market.