Please ensure Javascript is enabled for purposes of website accessibility
Log In Help Join The Motley Fool
Free Article Join Over 1 Million Premium Members And Get More In-Depth Stock Guidance and Research
By Dan Caplinger – Jun 11, 2020 at 7:13AM

The kids' media producer has seen its shares soar. Now it's time for the company to deliver.

The stock market's volatility during 2020 has been extreme, and the pace of the recent recovery has drawn a lot of speculative investment into the market. Genius Brands International (GNUS 2.02%) has been one of the beneficiaries of that trend, as its stock soared from $0.31 per share at the beginning of May to well above $10 per share for a brief period on June 4.

Those who like Genius Brands' prospects have high hopes that the kids' entertainment company is on the cusp of being the next big thing. Yet even though the stock has given up some of its recent gains, it's still trading far above where it did a couple months ago. Below, we'll look at three things that Genius Brands needs to do quickly in order to justify the confidence that shareholders have put in bidding the stock price up so far.

1. The Kartoon Channel launch needs to be a big success

The reason why Genius Brands is in the spotlight right now is because it's launching its kids' digital network, Kartoon Channel, on June 15. CEO Andy Heyward has been outspoken about the prospects for the launch, referring to it as "Netflix (NFLX 1.39%) for kids" and noting that it will be available in more than 100 million television households in the U.S. and 200 million mobile devices. Unlike other streaming services, Kartoon Channel won't have any subscription fees, with advertisers providing all of the financial support for the programming. 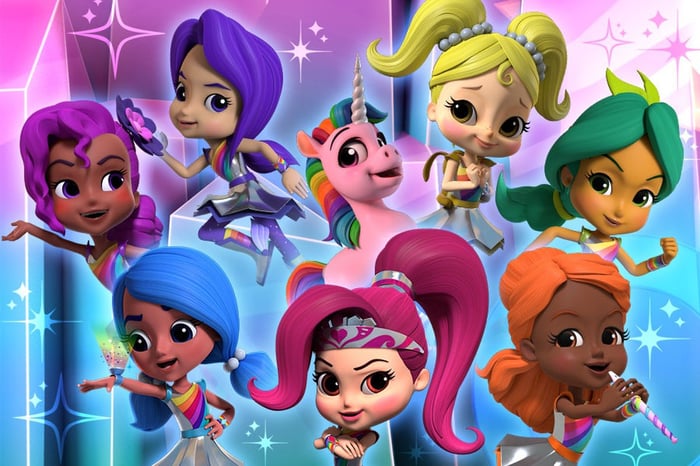 Genius has high hopes for the popularity of its characters in its cartoon offering Rainbow Rangers. Image source: Genius Brands.

Heyward believes that cartoons have timeless appeal that will make the network prosper despite the impact of the coronavirus pandemic on other media producers. Indeed, the Genius Brands CEO sees a time when kids are at home as being bullish for Kartoon Channel's prospects.

Investors will need to see audience numbers and ad buying activity that's in line with that optimism. Moreover, they'll want to see it quickly, because the current share price implies a fast ramp-up and won't tolerate calls for greater patience.

As often happens when a stock price soars, early investors in Genius Brands are looking for the exits. If Genius really wants to avoid the appearance of a pump-and-dump scheme, then it should urge those selling shareholders to reconsider.

Regardless of the true motivation behind the stock offering, the optics look terrible. During May, Genius Brands sold stock to "certain long standing investors" at prices ranging from $0.35 to $1.50 per share, raising gross proceeds of about $47.25 million. That followed the issuance of secured convertible notes and warrants in March to certain accredited investors, including Heyward. The warrants gave investors the right to buy stock at $0.21 per share, and now Genius Brands is registering the shares to allow those investors to sell the stock acquired through the warrants at much higher current prices.

To be fair, Heyward isn't listed as a selling shareholder, and the prospectus for the sale doesn't list the Genius Brands CEO as being affiliated with any of the limited partnerships and other investment groups that are selling shares. Nevertheless, with expectations of selling more than 60 million shares, the desire to cash out quick is evident -- and actions speak louder than the words of those trying to reassure current shareholders not to draw inferences from the move.

The press release that announced Neuman's and Loesch's appointment didn't give details about their compensation. Investors can therefore only hope that Genius didn't offer huge amounts of stock and option incentives that will divert significant portions of any future gains away from rank-and-file shareholders toward executives. For tiny companies to attract strong talent, however, it's all too common to have to make major concessions that aren't always in the best interest of shareholders.

Genius Brands is about to go through the most important event in its history, and investors are watching closely. For the kids' entertainment company to justify the big gains it's already seen in its share price, tackling these three issues would do a lot to build investor confidence and point to a brighter future. If it can't, then questions will linger about the growth stock's  true potential, and it'll be tougher for Genius Brands to keep gaining ground.