Please ensure Javascript is enabled for purposes of website accessibility
Log In Help Join The Motley Fool
Free Article Join Over 1 Million Premium Members And Get More In-Depth Stock Guidance and Research
By Dan Caplinger – Jun 11, 2020 at 11:22AM

The markets aren't happy about what they're seeing in the broader economy.

The stock market has waited for some clarity on the economic front for a while, and Thursday morning, it looks as though investors have gotten it -- and don't like what they see. Signs that COVID-19 cases are picking up in some locations threw cold water on the idea of a quick reopening worldwide, and the Federal Reserve's downbeat assessment of how long it could take for GDP to rebound weighed on market sentiment. Just before 10:30 a.m. EDT, the Dow Jones Industrial Average (^DJI -1.15%) was down 833 points to 26,165. The S&P 500 (^GSPC -1.02%) fell 81 points to 3,109, and even the high-flying Nasdaq Composite (^IXIC) wasn't able to escape the carnage, dropping 169 points to 9,852.

Consolidation has started to take place in many industries as a result of the economic impact of the coronavirus pandemic, as businesses look for ways to expand their scale and reduce costs through synergies. Ride-hailing service provider Uber (UBER 1.88%) had hoped to find such a solution in its pursuit of food-delivery specialist Grubhub (GRUB), but news that a rival bidder snatched up Grubhub with a more attractive offer means that Uber will have to consider other strategies.

Here's who's dining on Grubhub

Shares of Grubhub jumped 7% Thursday morning on confirmation that a new player has emerged that wants to buy out the food delivery company. After early news reports Wednesday suggested that Uber might have a competing bidder, Just Eat Takeaway confirmed that it will acquire Grubhub in a deal that values the company at $7.3 billion.

Just Eat and Grubhub have agreed to an all-stock buyout, with Grubhub shareholders receiving 0.671 shares of Just Eat stock for each Grubhub share they own. Based on Just Eat's closing share price before rumors started floating, that ratio puts a price of roughly $75 per share on Grubhub stock. Following the merger, Grubhub shareholders will own about 30% of the combined company.

By combining forces, the two companies will have a strong position in North America, with Just Eat having a leading service in Canada. Both players believe that their corporate cultures are similar, making it easier for them to merge and create the largest food delivery company outside China by sales.

Why Uber lost its appetite

Meanwhile, Uber stock fell 6%. Investors were disappointed that the company behind the Uber Eats service won't be able to combine forces with Grubhub, but opposition to the deal suggested that pursuing the merger further likely wouldn't have produced a favorable outcome. 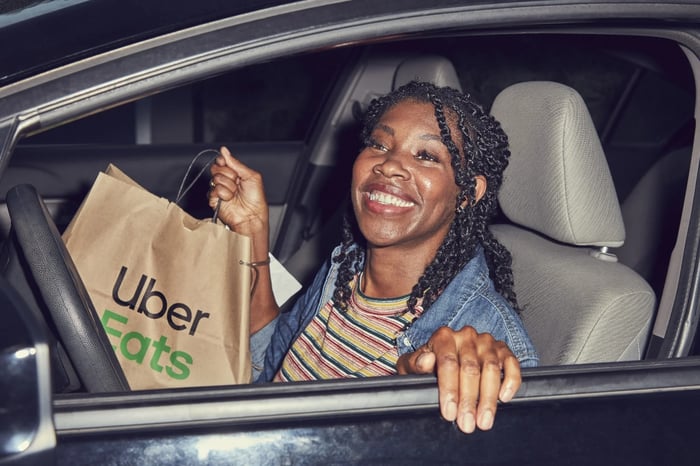 Antitrust concerns were a significant factor in the difficulties that Uber faced in getting a Grubhub merger done. For regulators to allow Uber and Grubhub to merge would require their accepting that the combined company and rival DoorDash would be by far the largest players in many major markets across the U.S., and controversy about the extent to which food delivery companies have already used their market power to enforce unfavorable terms on local restaurants have ramped up in recent months during the coronavirus pandemic.

For Uber, recovery in its primary ride-hailing business have helped lift shares from their recent lows. With a Grubhub deal off the table, Uber now faces the question of how to prioritize the two business segments. Uber Eats will remain an important part of the overall company, but it won't have the formidable competitive position it would've had with a Grubhub merger.