Gap's (NYSE:GPS) first-quarter (ending May 2) earnings report was disappointing, negatively impacted by the temporary closure of 90% of its global store base due to COVID-19. First-quarter revenue was $2.11 billion, a drop of 43% year over year, and below analyst expectations of $2.3 billion. The company did not provide comparable sales results for the quarter due to the temporary closures. As the retailer is now reopening its stores and shoring up its finances, here are three takeaways from the quarter. 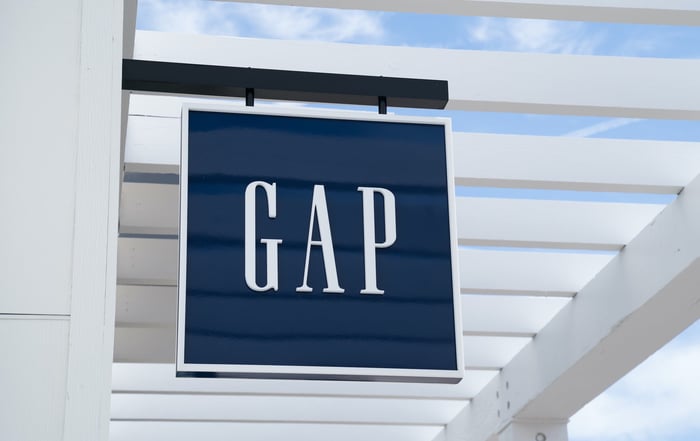 E-commerce was a source of strength

Gap's online business performed well during the quarter, with April online revenue up 40% and May online revenue up 100%. The company's e-commerce segment is the second-largest apparel e-commerce site in North America, with $4 billion of annual revenue prior to the COVID-19 pandemic. Gap's rollout of multichannel strategies will continue to help drive growth in the online segment.

CEO Sonia Syngal said on the earnings call,  "During the crisis, we doubled the way customers can shop with us by expanding our buy online pick-up in store capability to include curbside pick-up as well as a new virtual concierge that Athleta has begun testing, offering customers the chance to have one-on-one interactions with the store associates in the comfort of their own home." As many of Gap's customers were subject to lockdowns, the company saw a 40% increase year over year in customers shifting from retail-only to multichannel during the quarter.

As stores are reopening, the company sees e-commerce continuing to drive revenue, but noted there could be "lumpiness as customers adjust to having an in-store option." Its Ohio distribution center was expanded to double its capacity to meet the growing e-commerce demand. The clothing retailer's expenses were higher in the quarter due to online fulfillment taking place in stores. CFO Katrina O'Connell said, "We expect to largely mitigate these acute near-term pressures as our stores reopen and we right-size inventory against demand in our online channel."

Athleta and Old Navy brands are a bright spot

The Athleta business got a boost from the athleisure trend, with online sales up 49% during the quarter. Consumers also favored comfortable clothing as many continue to work from home and spend more time at home. The retailer is well positioned in its product assortment and brands. It expanded its active and lounge business, which benefits from American style becoming more casual.

Old Navy is also a source of strength for the Gap. While net sales for the segment during the quarter were down 42%, online sales increased by 20%. Consumers continue to seek value amid continued economic uncertainty. Syngal commented, "We're encouraged by the trends we're seeing, specifically the strong recovery at Old Navy, America's second largest apparel brand. We attribute this to Old Navy's advantaged value proposition for the entire family and strength in relevant categories such as active, fleet and denim."

There will be uncertainty due to the reopening and recession

However, the clothing company is facing a number of possible headwinds in 2020. There could be a drop in demand after the government stimulus ends. The market for clothing and accessories may be flooded by the retailers, such as Neiman Marcus and J. Crew, that have already announced bankruptcies. Consumers may cut back on spending in an uncertain economy.

In terms of finances, the consumer discretionary company has taken many measures to preserve cash, including suspending dividends and share repurchases, cutting executive pay, and halving capital expenditures. It also raised capital by issuing $2.25 billion in senior secured notes and a $1.9 billion asset-backed revolving credit facility. Gap's management is negotiating its rent payments that were suspended for stores that were closed in the first quarter.

Even with its aggressive cutting of expenses and capital raising, Gap's balance sheet is quite leveraged, with a debt-to-equity ratio of 4.5. Given the uncertainty around retail and consumer spending in the near term, investors shouldn't rush into buying Gap shares. The company is also highly leveraged, which brings added risk in an already volatile environment.