Cisco Systems' (NASDAQ:CSCO) stock surged to dizzying heights during the dot-com bubble that ran from 1995 to March 2000, generating millionaire-making returns for investors before its valuations overheated and the stock plummeted.

Cisco still hasn't recovered its dot-com bubble highs 20 years later. Instead, Cisco's valuations cooled and it became a mature blue-chip stock that was owned for its stability and dividends instead of breakneck growth.

Cisco stock generated a total return of about 175% over the past decade, thanks to the stability of its market-leading networking hardware business. It also continually reinvested its cash into dividends, constant buybacks, and a steady stream of acquisitions.

Looking ahead, will Cisco continue to generate stable growth, struggle against the competition and macro headwinds, or will fresh catalysts generate new millionaire-making returns?

Cisco is the world's top maker of network switches and routers. It controlled 50.9% of the ethernet switch market and 37.2% of the combined service provider and enterprise router market at the end of 2019, according to data analyst IDC.

Cisco's massive shares of those two markets -- which accounted for most of the infrastructure revenue that in turn generated 55% of its overall revenue in the first nine months of fiscal 2020 -- give it plenty of pricing power. That's why its adjusted gross and operating margin percentages remained in the 60s and 30s, respectively, over the past few years.

Cisco also bundles its portfolio of applications and security software -- which generated 18% of its revenue in the first nine months -- with its hardware products to widen its moat against rivals like Huawei, Arista (NYSE:ANET), and Juniper (NYSE:JNPR).

Cisco constantly acquires new companies -- like Sourcefire, AppDynamics, and Duo Security -- to strengthen those higher-growth businesses. It ended last quarter with $28.6 billion in cash and equivalents, which gives it plenty of room for more acquisitions.

Cisco's revenue growth decelerated this year as fewer enterprise campus and data center customers upgraded their networks; analysts expect its revenue to decline 5% this year as its earnings rise just 2%. But over the long term, these customers will likely ramp up their spending to cope with the surging use of cloud-based applications and streaming services.

Cisco remains the 800-pound gorilla in the networking hardware market, but its shares of the switching and router markets are shrinking. Huawei offers cheaper alternatives, while Arista threatens to replace traditional routers with combinations of its switches and FlexRoute software. 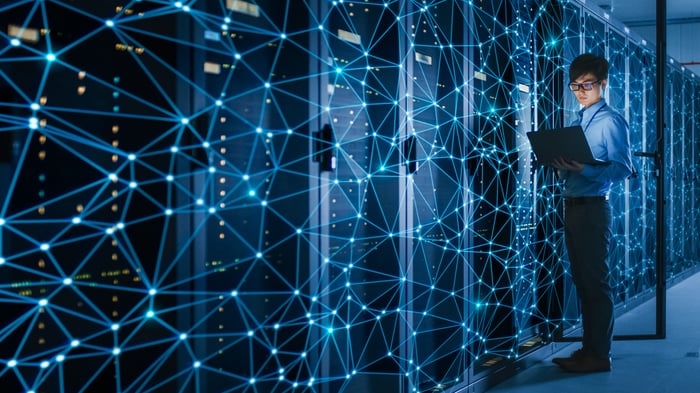 Cisco also faces competition from generic "white box" networking hardware running on open-source software -- which allows big customers like AT&T to cut Cisco's pricier products out of the loop. All of these headwinds could gradually erode Cisco's gross margins.

Cisco generates only a small percentage of its revenue from China, but it was notably barred from state-backed contracts in the country amid the escalating U.S.-China trade war. If that situation deteriorates, Cisco could lose its remaining business in China to domestic companies like Huawei and ZTE.

Battling so many rivals on multiple fronts is exhausting and could pressure Cisco to desperately pursue more acquisitions -- which could fragment instead of improving its software ecosystem.

Cisco probably won't generate massive millionaire-making returns over the next decade. It already has a market cap of over $200 million, and it will likely generate single-digit revenue and earnings growth for the foreseeable future. However, Cisco remains a solid long-term investment with a wide moat and a steady dividend -- and I won't sell my shares anytime soon.