Please ensure Javascript is enabled for purposes of website accessibility
Log In Help Join The Motley Fool
Free Article Join Over 1 Million Premium Members And Get More In-Depth Stock Guidance and Research
By Zhiyuan Sun – Jun 13, 2020 at 6:56AM

This biotech company was founded by a Nobel laureate.

In 2018, the founder of Bicycle Therapeutics (BCYC -4.43%), Sir Gregory Winter, was awarded the Nobel Prize in chemistry for his work in developing phage display (use of viruses that infect bacteria to connect proteins) to produce antibodies and peptides (small chains of amino acids) for new medicine.

The work that won the prize involves the foundation of the company's namesake technology for combating various oncological and ophthalmological conditions, bicycles, which are a combination of two circular peptide chains that possess clinical properties. Can the company deliver wealth for shareholders by developing new medicines via "bicycles"? Let's find out. 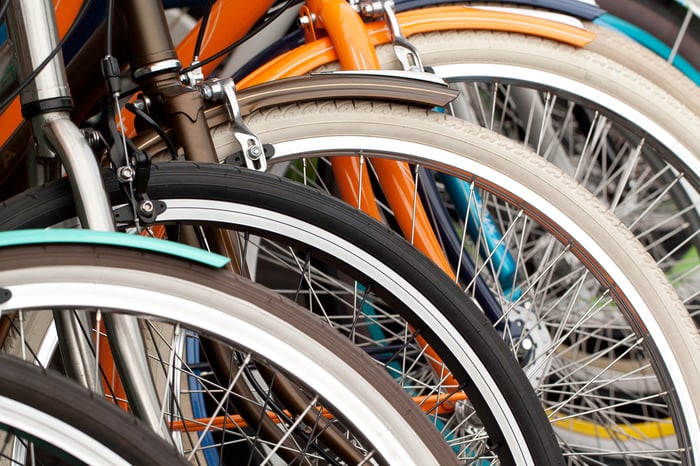 Bicycles are short linear peptides molded into a two cyclic structures via the aid of a chemical framework. These bicycles are administered intravenously and function by linking one end of its cyclic framework to a toxin and the other to a tumor site, serving as the bridge for the toxin to cross-over to the cancer site. There have been no cases of immunogenicity (autoimmune response) to the delivery of bicycles in studies to date, which is a good sign, as otherwise the body's immune system may recognize the bicycles as malignant and develop responses against them.

Utilizing this Nobel Prize technology that is protected by 90 families of patents, the company theorizes it will be able to create an anti-cancer agent that can be synthesized chemically (as opposed to requiring extraction from a patient or a donor) and be distributed rapidly among tissues, and form complex protein targets against forms of cancer than cannot be targeted by traditional therapeutic candidates.

Is it only a dream?

Unfortunately, while the company has high aspirations, most of its bicycle candidates (especially in its immuno-oncology portfolio) are still pending verification by in-vitro, or test tube, pre-clinical studies. Currently, only one candidate, BT1718, in its oncology pipeline has made it into phase 1 clinical studies and has interim results available to analyze.

In this study, 54% of the 24 evaluable patients with various advanced-stage solid tumors who were given BT1718 demonstrated a stable disease control (SDC), defined as neither sufficient shrinkage nor sufficient increase of tumor diameter after an experimental therapy is administered. There are concerns in the scientific community that the metric is ambiguous and may exaggerate therapeutic effects.

A much better endpoint to illustrate the efficacy of cancer therapeutic candidates is that of partial response (PR), defined as at least 30% shrinkage in tumor diameter. In the study, only one patient out of 24 demonstrated a partial response, yielding a PR rate of just 4.17%. The PR rate in patients taking BT1718 suggests it isn't revolutionary compared with many of its competitors' phase 1/2 PR rates that target advanced-stage cancer via immunotherapies.

Furthermore, it is unclear how many previous treatments patients had undergone before enrolling in the trial, as similar clinical studies demonstrated higher PR response where patients were treated for a course of seven conventional therapies before enrolling.

While another of the company's bicycle candidates, THR-149, succeeded in achieving efficacy and safety in phase 1 for treating diabetic macular edema (buildup of fluids in the retina), whether or not the drug can demonstrate superiority against the current standard of care, Eylea, remains to be verified.

This stock isn't a buy for now

Overall, I think the company's prospects just don't stack up, and its market cap of $300 million is just about right. The company does have close to $110 million in cash on hand and is operating at a burn rate of only $11 million per quarter. But in my view, there are just too many other cancer-fighting stocks to choose from in the sector for prospective biotech investors. It's best to wait until Bicycle verifies its Nobel-winning technology in clinical studies before initiating a position.

3 Ultra-Risky Biotech Stocks That Could Make You Filthy Rich

5 Absurdly Cheap Biotech Stocks That Could Make You Filthy Rich

6 Healthcare Stocks That Could Make You Filthy Rich