Please ensure Javascript is enabled for purposes of website accessibility
Log In Help Join The Motley Fool
Free Article Join Over 1 Million Premium Members And Get More In-Depth Stock Guidance and Research
By Dave Kovaleski - Jun 13, 2020 at 6:00AM

It has good bones, but how is the view for this bank stock?

Bank stocks tumbled Thursday on the news that the Federal Reserve expects benchmark interest rates to stay in the 0% range through 2022. The Fed also projected unemployment to come in around 10% and the GDP to contract 6.5% this year.

None of this is good news for banks, which rely on interest rates for interest income and GDP growth for loan revenue (and avoiding loan losses). While banks are better positioned to weather an economic downturn than they were in 2008, as they are required to hold more capital and credit quality is generally solid, the economy will take a while to recover. A report released in May by the International Monetary Fund said global banks will struggle to maintain profitability through 2025.

While banks have taken a beating during this downturn, valuations have come down sharply. The best place to find value is the large banks, whose scale and stability give them the best opportunity to outperform. One of the big four U.S. banks to consider is Citigroup (C 0.17%). Is Citigroup a buy while it's down? 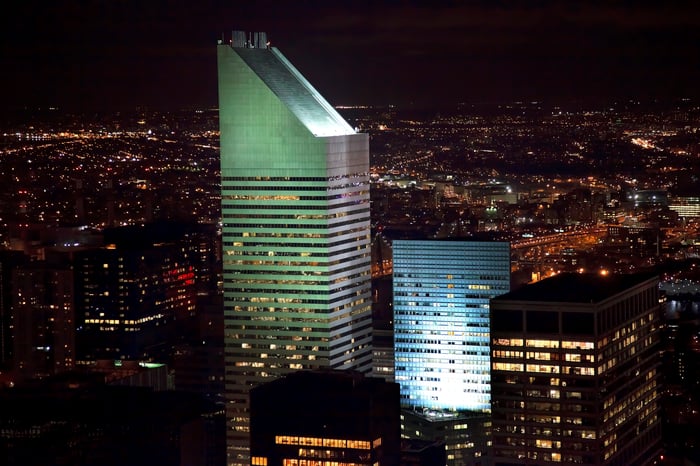 It's affordable -- with good bones

With Citigroup's stock down almost 35% this year through Friday's close, its valuation has plummeted -- its price-to-earnings ratio is about 7, and its price-to-book ratio is an extremely low 0.62, which is the lowest among the big four U.S. banks. It is hard to ignore how undervalued the stock is for a major U.S. bank, especially for one that is fundamentally solid, despite the environment. Citigroup has an excellent efficiency rating of 51.1%, which means it spent a little over half as much on overhead as it made in revenue. The company is also well-capitalized, with a common equity tier 1 (CET1) ratio of 11.2%, which is not down much from a year ago, when it was 11.9%.

But there are concerns beyond the above-mentioned macro trends. Citigroup is one of the world's largest credit card issuers, with about 9% of its assets in credit cards. This brings an added degree of risk from defaults and delinquencies that the other large banks do not have to the same degree. Citigroup also has more exposure outside the U.S., with more than half of its revenue coming from Europe, the Middle East, and Africa (EMEA), Asia, and Latin America. The IMF's recent "Global Financial Stability" study indicated that the return to profitability will be slower in Europe than North America, particularly among large banks.

Neighborhood could be better

Location, location, location is the mantra for home buyers. It sometimes applies to stocks, particularly those that are more cyclical -- like bank stocks, which are tied to economic growth. The banking industry is not a great neighborhood right now as the country moves into a recession. The view isn't great here, either, as there is uncertainty about how much banks will have to set aside for loan-loss reserves over the next few quarters. That will certainly put a drag on earnings.

At today's prices, Citigroup is definitely a stock to keep an eye on, but right now, it might be wise to wait to buy until another earnings report comes out and we gain some perspective on the recovery.