Please ensure Javascript is enabled for purposes of website accessibility
Log In Help Join The Motley Fool
Free Article Join Over 1 Million Premium Members And Get More In-Depth Stock Guidance and Research
By Christy Bieber – Jun 15, 2020 at 6:48AM

What if you're one of them? Don't let your extra benefits go to waste.

The CARES Act made important changes to unemployment benefits to help better provide for workers suffering due to the COVID-19 pandemic. One provision gave an extra $600 per week in unemployment benefits on top of state maximums. This extra money is available through July 31 and, because of it, as many as two-thirds of workers are currently receiving more money than they earned while on the job.

This statistic comes from new research conducted by the Becker Friedman Institute for Economics at the University of Chicago, which also revealed that one in five workers is receiving at least double what they earned while working.

If you're one of the millions who have suddenly found themselves with more money than they had before they lost their jobs, there are three key things you'll want to do. 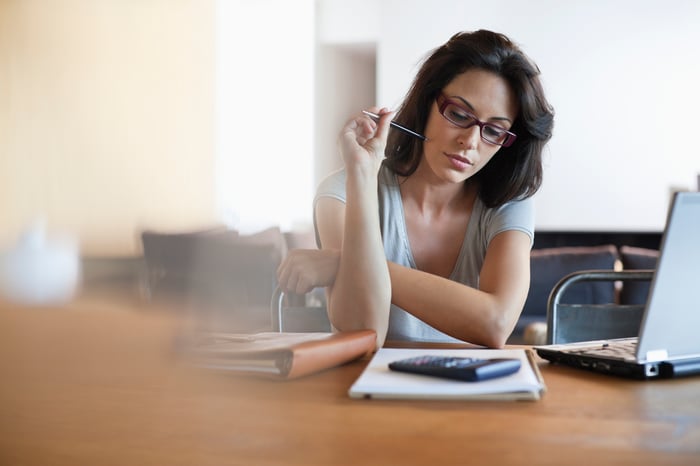 1. Prepare for a big tax bill

Unemployment benefits are subject to federal tax, and they're also taxed in some states.

While you can opt to have taxes withheld directly from your check, not everyone does. And even if you do, your state issues your checks and it decides how much to withhold for taxes based on its own tax rules, while tacking on another 10% for federal taxes. Your federal tax rate may be higher, though. And because you're making more on unemployment than you were pre-pandemic, there's a chance you could lose out on means-tested tax breaks that you usually receive.

There's a good chance you could end up owing the federal government money for all these reasons, especially if you aren't having taxes withheld from your unemployment checks. That means you need to prepare to pay the IRS by setting aside some cash now while your benefits are coming in.

You may also want to consider making quarterly estimated payments. If you don't and you end up owing the IRS too much, you could get hit with an underpayment penalty.

If your income now is higher than it was, this unexpected bump in available funds can be used to do something good for your future: investing the money.

Increasing the amount you're investing could help offset any losses in your retirement account during the coronavirus market crash as well as any money you're missing out on if your employer was matching 401(k) contributions prior to your job loss.

It's also a good time to invest because market volatility presents buying opportunities. Of course, if you're investing for the long term (which you should be), there's never really a bad time to increase your investments, and the unexpected extra cash from your benefits should hopefully make it easier to do so.

It may seem counterintuitive to suggest returning to work as soon as possible if you're making more on unemployment. But there are benefits to working that don't come from unemployment checks.

Depending on your job, you may get access to a 401(k) match and employer-provided health insurance. Missing out on either of these benefits could end up costing you more than you gain from the extra unemployment income.

Social Security taxes also don't come out of unemployment benefits, so you could end up reducing your future Social Security funds if you aren't working and paying into the system. And you could hurt your career prospects and earning potential if you're unemployed for a long time.

So while you may like a few months of higher income from unemployment, you should still look diligently for a job and jump on good opportunities. Hopefully, as more states start to reopen their economies, those chances will arise.

Make the most of your unemployment benefits

During these turbulent times, a little extra money from unemployment can open up opportunities. By investing your extra cash while also saving some to prepare for taxes, you can make sure your bigger benefits pay dividends for the long term. And by returning to work even if you're making more on unemployment, you can preserve your financial future.