Please ensure Javascript is enabled for purposes of website accessibility
Log In Help Join The Motley Fool
Free Article Join Over 1 Million Premium Members And Get More In-Depth Stock Guidance and Research
By Catherine Brock - May 3, 2020 at 7:01AM

The larger unemployment check may be nice now, but you may regret staying home from work later.

As millions of Americans lose their jobs and small businesses struggle to stay alive through shelter-in-place orders, key provisions of the Coronavirus Aid, Relief, and Economic Security (CARES) Act may be having unintended consequences.

The CARES Act was enacted by the federal government in March, as legislators moved to provide immediate economic relief to American households and small businesses feeling the pinch of the pandemic economy. The CARES Act dramatically expands state unemployment benefits to help households hang on financially through these unprecedented times. Unfortunately, those robust unemployment benefits may be too generous, as some workers are declining offers from former employers to return to the workforce. 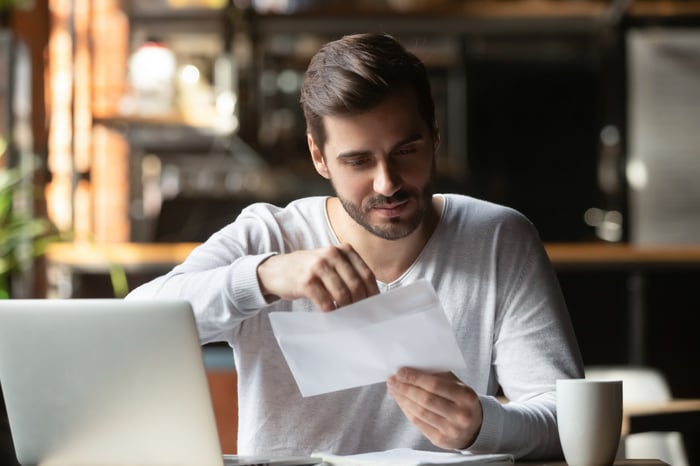 At issue is the $600 weekly supplement to state unemployment checks, enacted by the CARES Act. In many states, that extra $600 doubles or even triples unemployment payouts. Consider Alabama, which previously had a maximum weekly unemployment benefit of $275. The additional $600 increases that maximum to $875, which would be an income increase to anyone who was formerly making less than $45,000 a year. Even in Massachusetts, where benefits are the highest in the country, the extra $600 equates to a "raise" of 73%.

A big unemployment benefit versus a smaller paycheck? That's not an easy choice to make in normal times, when there isn't a contagious virus lurking outside your home. Certainly, remaining unemployed does satisfy some immediate needs. On the simplest level, you don't have to go outside and you can still pay your bills. But there are longer-term benefits -- for you, your employer, and the economy -- associated with making the tough choice to go back to work. Here are four of them.

1. You may regret staying home later

The $600 supplement is a temporary benefit that expires on July 31, 2020. Starting on August 1, your benefit will return to the normal amount allowed by your state. That's probably somewhere in the range of 40% to 45% of your previous working income.

If you do choose to sit tight at home until July, you won't be the only one hitting the job market this summer. The Economic Policy Institute predicts a nationwide unemployment rate of 15.6% in July of this year. To put that in perspective, the highest unemployment rate experienced during the Great Recession was 10% in October 2009.

Passing on an opportunity to work today could leave you in dire straits later, when your employment benefit drops and jobs are hard to come by.

You earn more at your job than just the paycheck. Though we don't usually quantify them, healthcare and retirement benefits are worth a pretty penny. According to the Bureau of Labor Statistics, benefit costs on average account for nearly 30% of an employee's total compensation.

Health insurance will be an expensive benefit to replace. Premiums for replacement coverage will be well more than what was being deducted from your paycheck, since employers usually pass on only a portion of those costs. You'd have to extend your health insurance through COBRA, which is notoriously expensive, or purchase a plan on the healthcare marketplace under a special enrollment period.

The loss of retirement plan benefits, such as a 401(k), may not be as impactful in the short term. But it could be very expensive later on. Your savings progress will stall out, unless you are disciplined enough to keep setting money aside without those payroll deductions. Longer-term, that will cost you thousands in missed contributions and lost earnings.

3. You may disqualify yourself from unemployment

Normally, you are supposed to accept suitable job offers while you're receiving unemployment. You can't reasonably argue that an offer to resume a job you already had isn't suitable. But there's still a gray area. Under provisions in the CARES Act, you do qualify for unemployment if you turn down a job for a coronavirus-related reason. You might need to care for your children or a sick spouse at home, for example. In the absence of those reasons, it goes against the spirit of unemployment to decline a viable job offer.

4. You may put your employer in a tight spot

Under the Paycheck Protection Program (PPP), established by the CARES Act, small businesses can apply for enough money to fund eight weeks of their payroll costs. They can also use the money to pay for certain overhead expenses, including mortgage payments, rent, and utilities. These are loaned funds that will be forgiven, as long as employers meet certain requirements:

More than the money

You're right to wonder why you should return to work for less than you can make staying at home. It's a tricky question, for sure, especially if you have young kids or the job doesn't offer much in the way of benefits. Here's some food for thought. While there's no way to predict how the economy will respond in the next three or six months, it's highly likely that the employment picture will be unpleasant for the rest of the year. If going back to work now insulates you from a dreary job market later, it may just be worth it -- assuming you take the appropriate steps to stay safe and healthy.