You might be surprised by who the winner and loser of this fight will be.

If you follow tech news, it is hard to miss press from Microsoft (MSFT -1.94%) and Slack Technologies (WORK) which are battling it out for the highly coveted hub of the digital office. Slack's messaging platform came on the scene first, but the deep-pocketed software specialist has invested heavily to catch up and even surpass the upstart's daily active users with a competing product -- Teams.

But all is not as it seems with this highly publicized race for users. Let's take a look at some history of this rivalry, what each is doing to attract users, and who will be the ultimate winner and loser of this war. 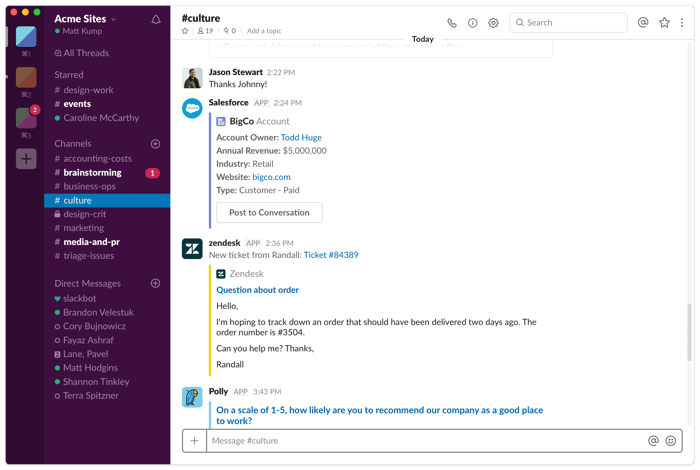 The early years of a new platform

Slack first released its messaging platform in August 2013, and within two years it was being used by more than one million people. In early 2016, it was rumored that the software giant considered buying the young start-up but ultimately scrapped the deal to focus on enhancing Skype. Less than a year later, Mr. Softy announced a competing product called Teams.

In November 2016, Teams was released with a big splash, available for preview in over 180 countries and in 18 languages immediately. Slack CEO Stewart Butterfield didn't let the announcement go unnoticed. The company took out a full-page advertisement in The New York Times with the heading "Dear Microsoft" and went on to welcome the competition and let the world know that Slack was here to stay.

Once the competing messaging software was released, the company wasted no time in encouraging the adoption of this free application for its millions of Microsoft 365 customers.

At the time of its announcement, Microsoft had more than 85 million customers who had immediate access to the application just by downloading it, so adoption took off quickly. By September 2018, the software was dubbed the fastest-growing application in Microsoft's history. By June 2019, the software juggernaut announced it reached over 13 million daily active users, surpassing Slack.

The media blitz didn't stop there. In November 2019, it announced it had reached 20 million daily active users. Jared Spataro, vice president of Microsoft 365, was interviewed saying "we think [Slack] will not have the breadth and depth that's really required [for collaboration software]." In January 2020, a Teams commercial aired during the NFL playoffs, showing how the product could "unleash the power of your team."

The coronavirus only accelerated adoption. In March 2020, the company announced daily active users (DAUs) soared to 44 million, and by its earnings call at the end of May, DAUs had grown to an amazing 75 million.

So why does Microsoft care so much about this one application? In its annual report, it indicates that Teams is "core to our vision for the modern workplace as the digital hub ..." If it can't fend off the Slack's surge, its productivity suite (including Outlook email) could start to lose its relevance, putting billions in revenues at risk.

Investors would think Slack's CEO would be nervous with the world's largest software company breathing down his neck, but he isn't the least bit scared.

At the same time the software behemoth was entering the messaging platform market, Slack had completed its fiscal year ending January 31, 2017. It racked up $105 million in annual revenues and 37,000 paying customers. Even with Teams' incredible adoption, Slack has grown revenues almost seven-fold to just short of a $700 million annual run rate and is projecting to end this fiscal year at $863 million on its top line. Customers have grown significantly too, with over 750,000 organizations using the upstart's messaging platform today and over 122,000 paying customers.

Butterfield frequently touts Slack's engagement statistics, which have increased with work-from-home situations on the rise. Average users now have around 120 minutes of daily interaction and over 10 hours connected to the tool. Teams defines daily active users as "the maximum daily users performing an intentional action in a 24-hour period across the desktop client, mobile client, and web client." This seems to be a low bar in comparison to Slack's average user engagement.

With the pandemic keeping employees at home, Butterfield and his team see a "once in a lifetime" opportunity to capture new customers. They are investing heavily in growth in the coming year to win enterprise customers, expand usage of its shared channels, and make its small- and medium-business offering easier to buy and implement. They've also partnered with Amazon, which firmly establishes the platform as a credible enterprise solution for large customers.

Declaring a winner and loser

For both of these companies, the stakes couldn't be higher. But who will be the real winner in this battle? Spataro summed it up well in an interview late last year: "There's definitely an interesting battle going on between Microsoft, Slack, and others right now. I do think you're seeing the tension in the market, and the best thing about tension is that it's great for customers. ..."

The loser? It's clearly email. As organizations gradually migrate away from the 50-year-old inbox technology and adopt a more practical collaboration platform for today's cloud-driven workplace, these two tech companies will still be battling it out for years to win your team as a customer.