Please ensure Javascript is enabled for purposes of website accessibility
Log In Help Join The Motley Fool
Free Article Join Over 1 Million Premium Members And Get More In-Depth Stock Guidance and Research
By Adam Levy – Jun 16, 2020 at 7:15AM

Some sporting events are coming back later this summer. Will cable subscribers?

Cord-cutting is accelerating as the coronavirus pandemic pushes more households to unsubscribe from cable. One of the biggest factors influencing those subscriber decisions is the sudden lack of live sports. Most sports leagues suspended play in mid-March.

First-quarter results from pay-TV giants like AT&T (T 0.38%) or Comcast (CMCSA -2.04%) belie the true effect of COVID-19 on cable subscriptions. The period included just a few weeks of the pandemic's impact in the United States. Cord-cutting accelerated in April and early May, according to a poll from Morning Consult.

But the NBA and NHL have plans to resume play later this summer. The MLB is still negotiating terms with the players' union to safely start the 2020 season, but many are hopeful it'll have a shortened season.

Sports are coming back. But will this news stop people from cutting the cord? 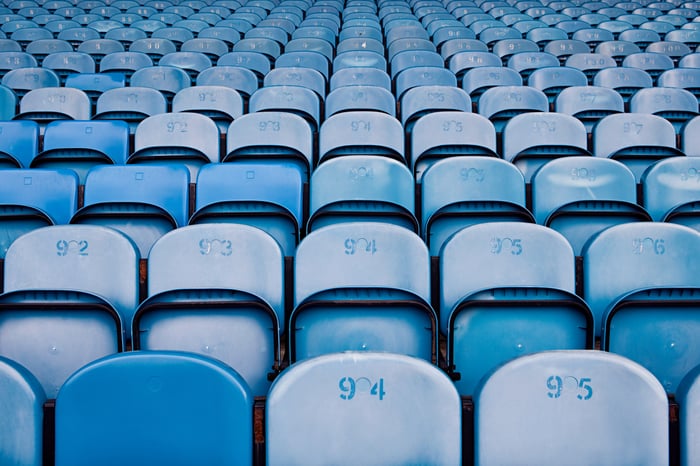 The influence of sports isn't as big as the economy

Sports are certainly a factor for people that have recently decided to cut the cord. Twelve percent of respondents said it was a major factor, while another 30% said it played at least some role in their decision, according to Morning Consult's poll.

And while sports may be coming back quickly, the economic fallout of COVID-19 may be much longer-lasting. The Fed just said it's planning to keep interest rates near 0% through 2021. While the U.S. added back 2.5 million jobs in May, it's still down about 19 million from February. The unemployment rate is still in the double digits. While there's hope for a V-shaped recovery, some industries will see much more upheaval than others. And that creates a lot of uncertainty for consumers.

That uncertainty about personal financial footing will play a much bigger role in whether consumers are willing to shell out the $126 per month they were paying, on average, last quarter to AT&T for their video service. More than half of subscribers are paying more than $100 per month across all providers.

Indeed, AT&T's John Stankey said he expects cord-cutting to grow in the latter half of the year as the economic reality sets in for a lot of families. Comcast was a bit more optimistic, noting the COVID-19 pandemic has had a minimal impact so far, and its subscriber losses are due to the secular trend and a price increase at the beginning of the year.

As cord-cutting accelerates in the second quarter, and sports' return is slated for the middle of the third quarter, we could see a bounce back in subscribers. But sports fans are more likely to find a better solution for their needs in a virtual provider versus a traditional cable or satellite service.

Virtual MVPDs offer the advantage of being able to pause subscriptions with the click of a button, and they're generally priced lower than traditional providers. But one of the biggest challenges for services like Alphabet's (GOOG -0.73%) (GOOGL -0.68%) YouTube TV or Disney's (DIS -2.31%) Hulu + Live TV is getting customers to switch from their existing provider. If those subscribers have already parted ways with their previous service, however, their job gets that much easier.

Investors should expect virtual MVPDs to highlight the return of sports later this summer and the ability to pause subscriptions when the season ends. That could accelerate the shift to virtual MVPDs we were already seeing.

Ultimately, however, the return of sports doesn't mean subscribers will come back. Some will permanently cancel cable and get their entertainment from a growing selection of on-demand options. Others won't have the financial footing to pay for the service. So AT&T and Comcast investors need to expect a continued acceleration in video subscriber losses.

Down 50%, There Has Never Been a Better Time to Buy This Nasdaq Stock

Why Airbnb Stock Rose Initially, Then Pulled Back Today