The sports gambling company seeks to raise money less than two months after going public, as investors shrug off the lack of actual sports.

Online sports fantasy and gambling company DraftKings (DKNG -1.24%) made its public debut in late April at an odd time, considering that play in virtually all professional sports leagues was suspended by the COVID-19 pandemic. But after selling shares at an initial price of just over $17, the company's share price has more than doubled. DraftKings has now announced plans to raise more capital in a sale of another 14 million shares, as certain stockholders also plan to sell 19 million shares of their own.

The company went public from a merger with publicly traded special-purpose acquisition company (SPAC) Diamond Eagle Acquisitions and sports gaming technology company SBTech. The company said the selling stockholders also intend to grant the underwriters of the deal an option for another 4.95 million shares. DraftKings will not realize any proceeds from the shares being sold by the stockholders. 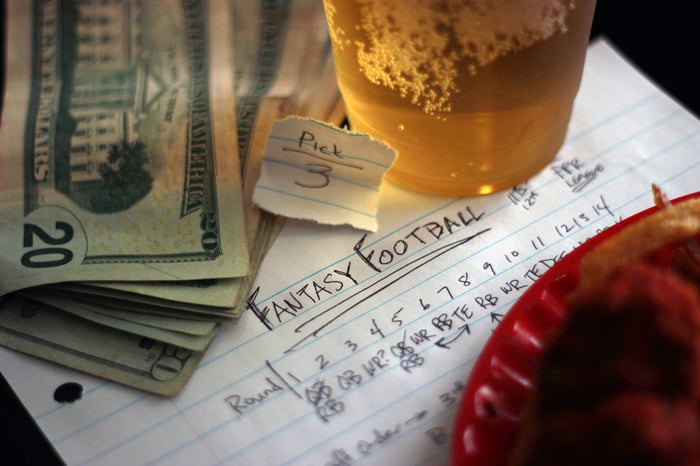 As sports leagues make plans to return to the field of play, DraftKings has expanded with recently announced plans to bring its mobile app and retails sites to Michigan in a partnership with Bay Mills Resort and Casinos. The company is hoping to cash in on the demand for the return of sports. In a sign of pent-up demand, the NFL said its 2020 draft, which was held virtually, was the most watched ever. Each day of the three-day event drew an audience over 30% greater than the 2019 live event.

With PGA golf and NASCAR events already returning, and plans for NBA and NHL games in the works, DraftKings is looking for business to grow. It said it will use its proceeds from the share offer for general corporate purposes.