Foot Locker (FL -2.65%) may be a shopping mall fixture now, but even before the coronavirus pandemic upended business as usual across the retail world, the footwear retailer was already jogging for the door. The crisis has only hastened that exit.

This spells more trouble for mall operators like Simon Property Group (SPG -0.76%). Some have chosen to acquire troubled retailers out of bankruptcy in order to prevent more empty storefronts from appearing in their shopping centers, but retailers like Foot Locker are creating a vacuum of their own by looking for off-mall space to set up shop. 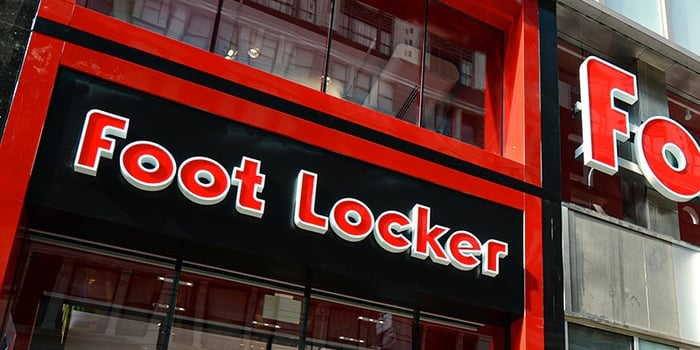 Foot Locker operates over 3,200 stores worldwide under a variety of banners such as its namesake stores, Lady Foot Locker, Kids Foot Locker, Champs Sports, and others. The vast majority of the stores are in the U.S., and some 80% are located in shopping malls.

Yet it has been developing what it calls its "power" store format, which it describes as a community-based concept providing "pinnacle retail experiences that deliver connected customer interactions through service, experience, product, and a sense of community."

These concept stores, which are not meant to be located in malls, feature upwards of 8,500 square feet of selling space -- about three times the size of the chain's average U.S. mall-based store at 2,800 square feet. (Internationally, the average is just 1,700 square feet.)

It opened six of these new stores in 2019 and had planned to open 20 more this year before the pandemic struck.

Propping up the mall

Previously, the trio acquired bankrupt Aeropostale for $243 million plus debt to keep it from liquidating its stores, and now they're reportedly in talks to buy J.C. Penney, which has declared bankruptcy.

The rationale for this buying spree of damaged retailers resembles the much-criticized "broken windows theory" of law enforcement, which postulates that allowing small signs of crime and civil disorder to go unfixed -- the proverbial broken windows -- creates an environment that encourages more crime in a vicious cycle. In this case, the mall operators clearly are worried that allowing too many signs of decline -- vacancies -- will cause fewer consumers to visit malls, which will cause more mall-centric retailers to go under, adding to the vacancy problem and eventually snowballing into mall closures.

Buying failed chains, though, is a risky proposition, even if they can be acquired at fire-sale prices. The mall operators will still face the same vacancy problems as successful retailers voluntarily close their stores to seek spaces closer to the consumer.

A different kind of risk

Yet off-mall locations are no panacea and carry their own risks. New Jersey, for example, has more shopping malls than any other state per capita and now is home to the third-biggest mall in North America, the recently completed American Dream complex in the Meadowlands. Retail stores had been scheduled to open their doors in that mall on March 19 -- until the pandemic was declared.

Such mall density, including the thousands of strip malls that line the state's highways, also make New Jersey one of the most congested states in the nation in terms of retail. Off-mall locations aren't necessarily going to be better places to shop there.

Of course, not every place is like New Jersey, and having a diminished shopping mall presence has helped Kohl's avoid the fate of J.C. Penney, even if it has been harmed by the overall declining state of brick-and-mortar retail.

Fortunately, Foot Locker is also investing heavily in its digital channel with the goal of making it a significantly bigger component of overall sales.

Over the past few years, Foot Locker has invested heavily in its digital and logistics capabilities, allowing it to ramp up its direct-to-customer and social media channels to drive sales. Last quarter, is processed almost 200,000 orders in a single day.

"This digital-only focus has accelerated our evolution as an omnichannel retailer, enhanced our customer connections and will continue to benefit us into the future," President and CEO Dick Johnson told analysts on the company's first-quarter earnings call.

Still, Foot Locker's direct-to-customer business is a lower margin one, and was partially responsible for the decline in gross margins and merchandise margins it reported. It's also found it necessary to be more promotional in the channel than it otherwise would be.

Although Foot Locker's stock is now trading 60% above the low point it touched in March, it remains down by about 25% year to date, and nearly 40% below the high it hit last November.

Hastening its exit from the fading shopping mall scene will allow Foot Locker to focus on "nomadic retail" to boost sales. Trading at less than 9 times earnings estimates and at just a fraction of its sales, this retailer's transformation makes it a compelling stock that investors should take a closer look at.