Find out who might not want to own their shares anymore.

The IPO market has come back in full force, and some promising companies are offering their shares on the open market. Electric truck specialist Nikola (NKLA -1.40%) recently made its shares available to the public through its merger with VectoIQ Holdings earlier this month, and the stock has soared since the combination.

Long-term investors like to see devoted insiders hang onto their shares, as it indicates their belief that there's more upside in the stock they own. On the other hand, it's common to see shareholders sell off at least a portion of their holdings following an IPO. What's particularly troubling, though, is when investors race to the exits at their earliest opportunity just days after a stock comes public. That's what could be happening with Nikola, and it should serve as a warning sign for those who are bullish on the stock. 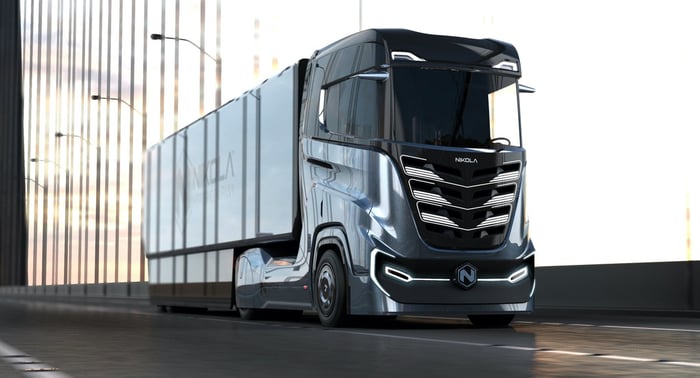 The sale that Nikola investors didn't want to see

Nikola has generated a big splash with the announcement of its Badger electric pickup truck, which will be available for preorder on June 29. However, there's another sale going on that shareholders in the electric vehicle specialist aren't nearly as excited about.

On June 15, Nikola filed a preliminary prospectus with the U.S. Securities and Exchange Commission. The filing seeks to allow a large number of early investors in the company to sell off their holdings in Nikola stock, with the total sale potentially involving more than 53 million shares of Nikola stock and almost 24 million warrants to purchase additional Nikola shares.

Nikola isn't looking to sell any shares of its own on the open market. Current shareholders own all of the stock offered in the prospectus. The only benefit for Nikola's business is that upon exercise of the warrants to purchase shares of the electric truck maker at $11.50 per share, investors will pay Nikola almost $275 million in cash that will be available to the company.

Even after accounting for that $275 million, selling shareholders stand to bring in almost $4.4 billion in proceeds from dumping their Nikola stock, assuming a share price of $60. If the stock moves upward toward its all-time high above $90, then it'll mean even more profits for early investors.

Taking the money and running

When most investors own a winning stock, they tend to want to remain shareholders. They might sell off a portion of their holdings, but dumping the entire thing is a sign of something short of complete confidence in a company's future.

That's what makes it so surprising that almost five dozen shareholders are looking to position themselves to sell off potentially their entire holdings in the stock. They include the following:

In addition, several other major shareholders are enabling themselves to sell off big portions of their holdings, even though they're hanging onto at least some of their positions. ValueAct Spring Master Fund is registering 5 million shares, while keeping about 6.68 million shares. Alyeska Master Fund lists most of its 2.48 million share holdings, keeping just 3,018 shares.

More sales could be coming

The prospectus makes clear that registering shares doesn't necessarily mean that current shareholders will sell their stock immediately. However, it lists a number of ways that those shareholders can sell once the stock is registered, including ordinary brokerage transactions, private agreements, or through an underwritten offering. Often, investors begin to sell shares soon after registration statements like these are finalized and get approval from the U.S. Securities and Exchange Commission.

In addition, this might be just the first round of stock to be offered. Lock-up agreements limited some shareholders to certain amounts after 30 days following the closing date of the merger, with some having to wait 90 days after closing for larger sales. For those who have any stock left, the 90-day mark could be another mark to watch. Original investors have longer lock-ups of six months to a year, including entities related to CEO Trevor Milton.

Investors are right to be excited about Nikola's product lineup, which could be groundbreaking for both passenger pickup trucks and commercial semi tractor-trailers. However, would-be shareholders should consider just how quickly big-name investors might be looking to get out of the truck stock. If major insiders pull the trigger and sell, it'll be hard to have as much confidence in the company's long-term future.

Editor's note: A previous version of this article erroneously suggested that all listed shareholders had definitive plans for imminent sales of their shares. The author and the Fool regret the error.