Please ensure Javascript is enabled for purposes of website accessibility
Log In Help Join The Motley Fool
Free Article Join Over 1 Million Premium Members And Get More In-Depth Stock Guidance and Research
By John Rosevear - May 14, 2020 at 6:05AM

Shares of VectoIQ Acquisition (VTIQ) have had a huge run since the beginning of May, rising over 130% through the market's close on May 13.

It's not hard to figure out why: VectoIQ, a special purpose acquisition company (or "SPAC") led by former General Motors (GM 0.72%) vice chairman Steve Girsky, is expected to complete a merger with privately held Nikola Motor in June -- and Nikola Motor is a leader in the race to build zero-emission semi trucks. 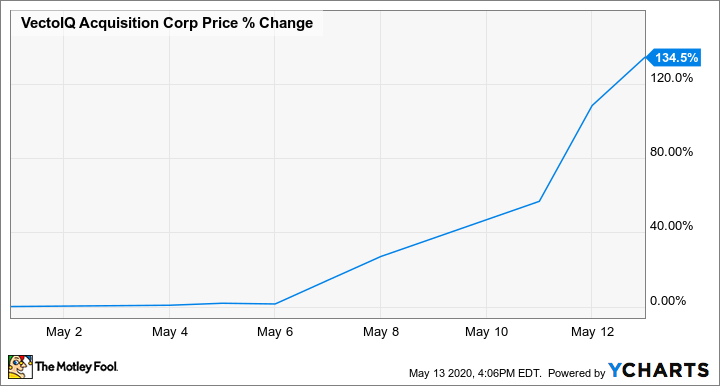 Sure, we've all heard a lot about Tesla's (TSLA -3.20%) oft-delayed Semi, which Tesla now says will go into "limited production" (whatever that means) sometime in 2021. Meanwhile, Nikola is racking up preorders for a battery-powered truck with good specifications that really will ship in 2021 -- and a hydrogen fuel-cell version that will follow in 2023.

For investors who are new to all of this, or just wondering why this strange-sounding company's stock has soared in recent weeks, here's a look at the upcoming deal.

VectoIQ spent about two years looking for a later-stage company to acquire, settling on Nikola earlier this year.

Who is Nikola Motor Company?

Nikola, founded in 2014 by its current CEO, Trevor Milton, has developed a series of Class 8 (tractor-trailer) electric heavy trucks that have attracted considerable interest from fleet operators and investors. One reason for the heavy interest: Nikola's trucks can be powered by either batteries or hydrogen fuel cells. Nikola's batteries aren't off-the-shelf units. The company claims to have developed a battery with four times the energy density of existing lithium-ion cells, that in a vehicle application can deliver twice the range of a lithium-ion battery pack with the same weight and bulk. It sounds a bit speculative, but the technology is good enough to have attracted a $250 million investment from CNH Industrial's (CNHI 0.41%) big-rig subsidiary IVESCO last year. If the battery technology pans out, it should give Nikola a significant competitive advantage over leading rivals (yes, including Tesla).

Nikola also has a strong selling point for its fuel-cell trucks: It's taking a page from Tesla's book and building its own "recharging" network, in this case hydrogen refueling stations.

Fuel cells are expensive to make and probably won't be practical for regular passenger cars any time soon, but at least in theory, they have two big advantages in heavy trucks: A fuel cell and hydrogen tank weigh a lot less than a battery pack that could provide comparable range, meaning more cargo can be carried, and fuel cells can be "recharged" in a matter of minutes by refilling the hydrogen tank.

Nikola plans to use the funds raised as part of this transaction to begin construction of a factory in Arizona.

How will this merger work?

In a nutshell, Nikola will become a wholly owned subsidiary of VectoIQ. Existing Nikola shareholders will receive 1,901 shares of VectoIQ stock for each of their Nikola shares. The combined company will change its name to Nikola Corporation, and its stock will trade on the Nasdaq Capital Market under a new ticker symbol, "NKLA."

As part of the deal, the combined company will raise $525 million in a private placement at $10 per share. The investors include Fidelity Investments, ValueAct Spring Fund, and P. Schoenfeld Asset Management.

Once the deal is done, Milton will become executive chairman of the new company, current Nikola president Mark Russell will become its CEO, current Nikola chief financial officer Kim Brady will remain in that role, and Girsky will join the board of directors.

When will the deal close?

VectoIQ is holding a special meeting of shareholders to vote on the deal on June 2. Assuming they approve it (which seems very likely), the deal will close as soon as possible after that date, likely by mid-June.

I expect that VectoIQ and Nikola will provide auto investors with more information as we get closer to that date.