Please ensure Javascript is enabled for purposes of website accessibility
Log In Help Join The Motley Fool
Free Article Join Over 1 Million Premium Members And Get More In-Depth Stock Guidance and Research
By Dan Caplinger - May 21, 2020 at 3:49PM

Another special-purpose acquisition company is seeing its stock soar, but a happy ending is far from assured.

Major benchmarks fell back slightly on Thursday, although some pockets of the market performed better than others. Small-cap stocks posted modest gains, with investors focusing on the rising prospects for an economic recovery as businesses across the nation begin to reopen. Larger companies, however, faced more global issues that weighed on their shares' performance for the day. By the end of trading, the Dow Jones Industrial Average (^DJI 0.71%), S&P 500 (^GSPC 0.19%), and Nasdaq Composite (^IXIC 0.00%) all saw modest losses of less than 1%.

Even with the downturn in stocks on Thursday, market participants remain excited about the prospects for new companies making their shares available to investors for the first time. Rather than going through the initial public offering process from scratch, a growing number of businesses are turning to special-purpose acquisition companies (SPAC) to go public. One of the latest examples of this trend is VectoIQ Acquisition (VTIQ), and its rise has investors wondering whether the company will end up being a big winner like DraftKings (DKNG -0.67%), or going through a rise and fall like Virgin Galactic Holdings (SPCE -0.56%) has.

A short history of VectoIQ

VectoIQ Acquisition has been in existence since mid-2018, but it wasn't really on anyone's radar until March 2020. That's when the roughly $200 million SPAC agreed to acquire privately held electric truck manufacturer Nikola. Nikola is looking at advancing electric-powered vehicle technology both through battery-driven electric power and using hydrogen fuel cells, with the eventual goal of developing semitractor-trailer trucks that could compete against electric-vehicle giant Tesla (TSLA -0.89%). 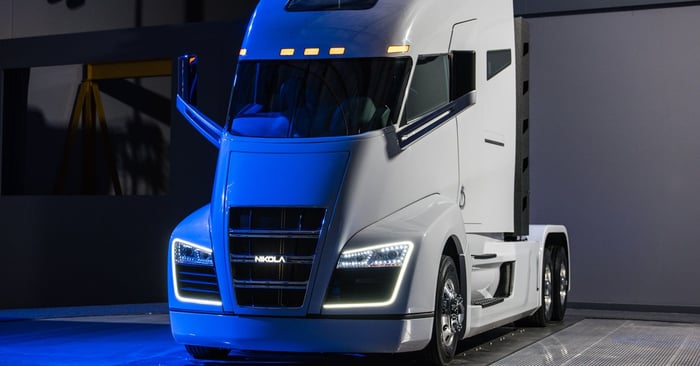 The original announcement caused a brief spike in VectoIQ's share price, but the big gains didn't happen until the deal got closer to fruition. In early May, the two companies expressed their intent to keep moving forward, and that caused the share price to more than double.

Since then, the stock has been volatile, but it's generally moved higher. Thursday's gain of 4% brought the shares close to the $24 mark, and while that's below the $35 level that they briefly hit a week ago, it still reflects optimism about Nikola's business model and its ability to disrupt the auto and truck industry.

Just like a traditional IPO, however, the hype surrounding SPACs doesn't always lead to unqualified success. The experience of two other well-known special acquisition companies provides a point and counterpoint.

For DraftKings, which just closed its merger with a SPAC in late April, and the fantasy-sports gambling service's stock has continued its ascent. In just the past month, DraftKings is up 50%, and its first report as a publicly traded company showed the full potential of the company to keep growing. Even with most sports activities having gotten suspended due to the coronavirus pandemic, shareholders expect DraftKings to rebound sharply once leagues get back to playing.

By contrast, Virgin Galactic went through a period of strong share-price gains, but it's fallen by more than 60% from its all-time highs. Troubles in other parts of Virgin visionary Sir Richard Branson's corporate empire prompted the leader to announce a significant sale of Virgin Galactic shares, and that made some investors less confident in the space tourism company's future. At present, Virgin Galactic hasn't yet made its first commercial launch, and it's uncertain what impact the pandemic will have on its ability to move forward as expeditiously as originally hoped.

It's impossible to know which end of the spectrum Nicola and VectoIQ will land on. Investors should just bear in mind that a positive outcome is far from assured -- and the hype of a Nicola/VectoIQ combination could fade and send share prices lower.