Please ensure Javascript is enabled for purposes of website accessibility
Log In Help Join The Motley Fool
Free Article Join Over 1 Million Premium Members And Get More In-Depth Stock Guidance and Research
By John Bromels – Jun 19, 2020 at 7:19AM

Shares are at a five-year high. Could this top fuel cell stock take off?

When a stock is stuck below $3/share for nearly five straight years, you might think it's never going to move any higher. But that's exactly what's happened to hydrogen fuel cell specialist Plug Power (PLUG -5.47%).

In October 2019, the company's shares broke the $3 mark for the first time since March 2015. But they didn't stop there: They rose above $4/share in January, and are currently trading above $5/share. But now that Plug's stock price has doubled in less than a year, you might be worried you've missed out on the big gains.

Let's take a closer look at Plug to find out why its shares have gone up so far, so fast, and whether they're likely to keep rising. 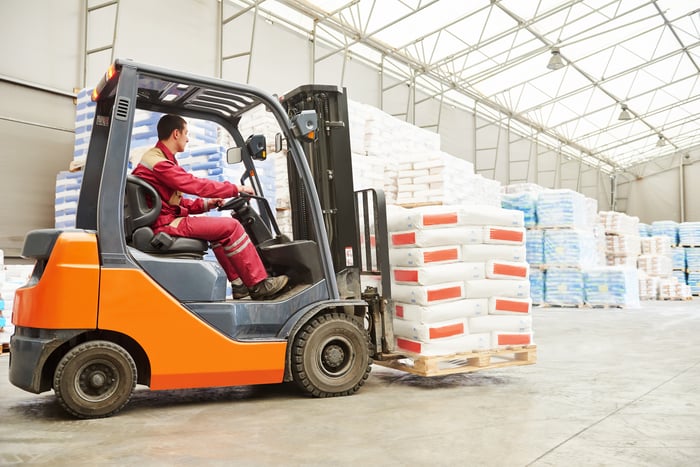 Stuck in a rut

Plug is making money the same way it has for years: by selling specialty hydrogen fuel cell vehicles (mostly forklifts) in niche markets (mostly warehouses). Plug also services the machines and delivers the liquid hydrogen fuel on which they run. However, its revenue has skyrocketed over the past three years, up nearly 200%.

Plug is making more revenue because hydrogen fuel cells have proven to be a good energy choice for powering forklifts. Because many warehouses operate on round-the-clock shifts, waiting around to charge up a battery-powered forklift isn't feasible. Recharging a hydrogen fuel cell, on the other hand, is similar to filling up a car at a gas station.

However, for all the success Plug has seen in its niche markets, its hydrogen fuel cells have yet to make a splash where the big money is: in cars, delivery vans, trucks, and other on-road vehicles. Certainly, it's not for lack of trying, but gas-powered vehicles dominate the space, and among renewable options, battery-powered vehicles like Tesla's (TSLA -4.59%) Model 3 have run rings around hydrogen-powered vehicles. Plus, Plug will have competition from hot new hydrogen-powered truck maker Nikola (NKLA -4.66%).

A man with a(nother) plan

Plug claims an expansion into on-road vehicles is part of its long-term plan to become profitable. Plug also hopes to break into hydrogen's other big area of opportunity: backup power generators.

Right now, though, these plans are still just plans. On Plug's Q1 2020 earnings call on May 7, CEO Andy Marsh talked up the company's latest ProGen fuel cell: a "high-power, 125 kilowatt stack that well-positions Plug for on-road and large-scale backup power markets," which it launched in February. While it has announced a partnership with Colorado-based Lightning Systems to develop hydrogen-powered commercial trucks based on these cells, no customers have been announced. Meanwhile, Tesla and Nikola are racing to bring their own zero-emission semitrucks to market.

Also in May, Plug also announced a pending acquisition of hydrogen producer United Hydrogen, which it expects will improve its hydrogen sales margins. It also revealed a letter of intent to buy an unnamed company that manufactures electrolyzers -- devices which break water into hydrogen and oxygen molecules. Plug has a "plan to build this business into one of the leading electrolyzer companies in the world."

So, big plans as usual from Plug. Also as usual, not much in the way of execution.

While Plug tries to get its plans off the ground, it continues to lose money and burn through cash. Not only has the company not had a single profitable year in 20 years, it seems to be getting less profitable as opposed to more profitable: its trailing 12-month net loss has exceeded $75 million for 10 consecutive quarters, a company record. Similarly, its trailing 12-month cash burn has exceeded $50 million for six consecutive quarters, also a record.

Plug manages to keep itself afloat by taking on more debt and issuing more shares. It carries total long-term debt of more than $200 million, and its share count recently surpassed 300 million: 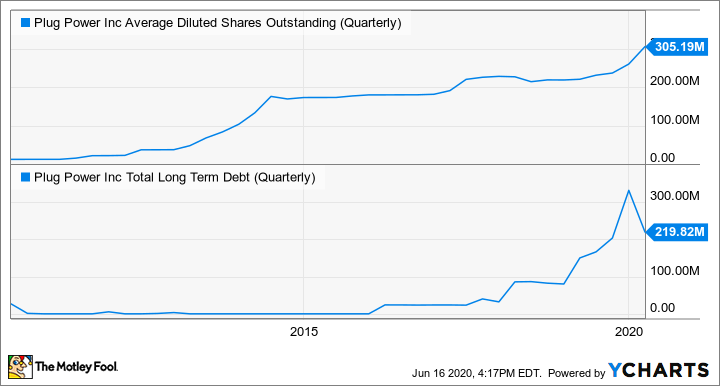 In other words, Plug shares are now more diluted than they've ever been, and its debt load is higher than it's ever been with the exception of last quarter. However, Plug's shares are sitting near a five-year high, with not much to show for it ... besides plans.

This doesn't seem like a recipe for a buy.

If the U.S. changes its currency from dollars to plans, Plug shareholders will be rolling in the dough. However, Plug's big plans have a long history of coming up short of expectations. They haven't brought the company any closer to profitability or slowed its cash burn.

Analysts seem enamored of Plug's current plans and the fact that it's just been granted additional credit on (slightly) more favorable terms (9.5% interest instead of 12%). For a company already awash in debt, though, the ability to take on more debt at nearly 10% interest isn't necessarily a good thing for investors.

Other speculative companies might be worth taking a risk on, in exchange for the potential of a high payout. Once you factor in Plug's 20-year history of overpromising and underdelivering, though, you should probably wait for something more concrete than a compelling plan before investing. Until it can show some tangible results, I can't call Plug a buy.