Please ensure Javascript is enabled for purposes of website accessibility
Log In Help Join The Motley Fool
Free Article Join Over 1 Million Premium Members And Get More In-Depth Stock Guidance and Research
By Sushree Mohanty – Updated Jun 19, 2020 at 11:07AM

The cannabis company's speculative acquisition deal with Canopy Growth isn't the only reason to like this stock.

No doubt, an eventual buyout by cannabis giant Canopy Growth (CGC -25.73%) will be lucrative for Acreage Holdings (ACRGF) shareholders. As per an agreement inked last year, Canopy will acquire Acreage once the U.S. legalizes marijuana at the federal level. But that isn't the only reason investors should consider this stock.

Like most U.S. cannabis companies, Acreage has produced good revenue numbers recently. In the fourth quarter of 2019, its reported revenue rose 101% year over year to $21.1 million, and its full-year revenue grew 251% to $74.1 million. And that was before the COVID-19 pandemic hit -- reflecting Acreage's successful efforts to expand sales even before the panic buying began. 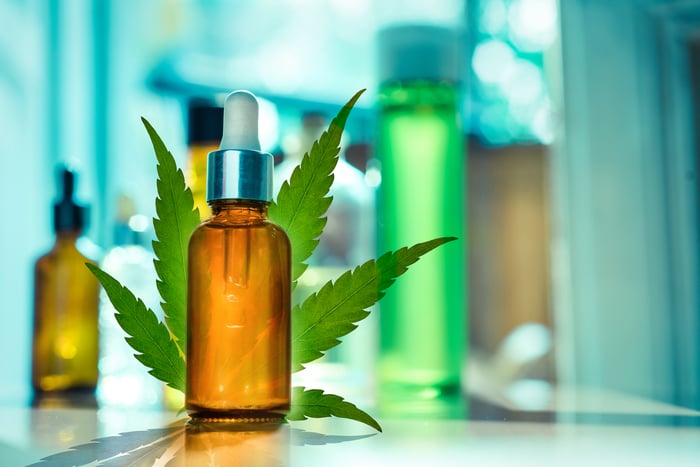 But its bottom line failed to impress investors. It reported an adjusted net loss of $14.6 million, larger than the $8.2 million loss it incurred in Q4 2018. For the full year, Acreage's net loss totaled $50.6 million, against a net loss of $32.3 million in 2018. Pro forma adjusted earnings before interest, tax, depreciation, and amortization (EBITDA) came in at $15.8 million for Q4 and $44.4 million for the full year.

What I find interesting is Acreage's strategy of focusing on profitable markets rather than expanding everywhere haphazardly. In line with that strategy, it sold certain non-core and underperforming assets in May, paving the way for margin improvements and the possibility of achieving positive pro forma adjusted EBITDA for 2020. The company divested its undeveloped real estate in Nantucket, Mass., and the one medical dispensary it operated as Acreage North Dakota LLC.

Management thinks COVID-19 is having more of an impact on the U.S. cannabis businesses that were already suffering the most from other issues such as limited capital availability, regulatory problems, and the health issues caused by illicit vaping. The operational changes should position Acreage well to navigate this crisis and prosper after it fades. But no change comes without a cost; specifically, Acreage will take a pre-tax, non-cash charge of $80 million to $100 million in the first quarter.

Stay tuned for the Q1 earnings results, which are coming up June 25, to find out more about Acreage's plans for this year. Its shares are down 16.2% so far in June, while the Horizons Marijuana Life Sciences Index ETF has declined 3.6%. At the same time, Canopy Growth is up 5%. 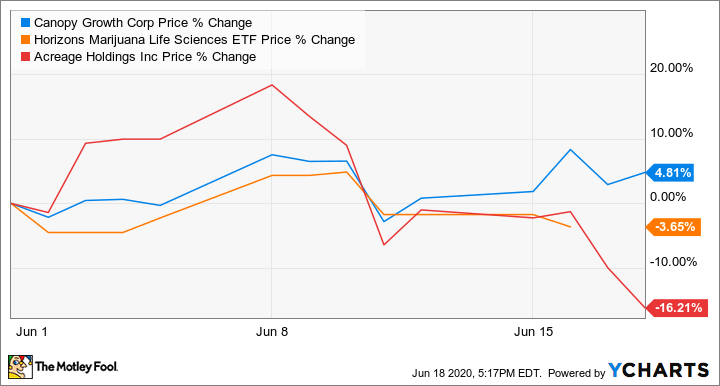 The sale and use of medical marijuana are now legal in 33 states and the District of Columbia, while adult use for recreational purposes is legal in 11 states and D.C. Acreage already has a presence in 20 U.S. states (including pending acquisitions) with a total population of 180 million.

The COVID-19 pandemic compelled the marijuana company's leadership to make some hard decisions to cut costs, such as furloughing employees and closing dispensaries. In April, it relinquished its medical cannabis manufacturing license in Iowa. It also withdrew from certain acquisition agreements. But it continues to focus on its stronger markets -- California, Michigan, Massachusetts, and new entry Illinois, which is delivering impressive cannabis sales this year.

For 2020, Acreage plans to focus on its existing markets and build 10 to 15 new retail dispensaries, with a capital budget of $45 million to $50 million. To achieve positive EBITDA, Acreage aims to bring down its general and administrative costs by $7 million annually.

Wait for it to bear fruit!

Marijuana legalization on a federal level is unlikely in 2020. But if things go well, 2022 might be the year; support for it is huge, with about two-thirds of Americans in a 2019 Pew Research Center survey favoring legalization. More states could join the crowd as cannabis legalization efforts continue at the state level, allowing Acreage to expand and hit profitability sooner.

If you are an investor who is OK with a bit of risk, and you have the patience to buy for the long haul and wait for your investments to bear fruit, this stock might be right for you. Canopy Growth's market presence and growth strategies have put it in a safe position, and with Constellation Brands financially backing it, Canopy should have little difficulty weathering the pandemic. Moreover, its portfolio recently grew more impressive with its launches of cannabis derivative products such as vapes and cannabis-infused beverages. Thus, a tie-up with Canopy could prove highly beneficial for Acreage Holdings.