Even with stores starting to reopen, apparel stocks hardly seem to be the investment to buy during an ongoing pandemic. They've been beaten down as their extensive vulnerabilities were exposed, and many might never recover.

Yet not every apparel company is busted. Many will recover from this temporary setback, and some will even thrive, going on to be leading investments in a portfolio. Three apparel stocks investors should closely consider are Amazon.com (NASDAQ:AMZN), Burlington Stores (NYSE:BURL), and Nike (NYSE:NKE). 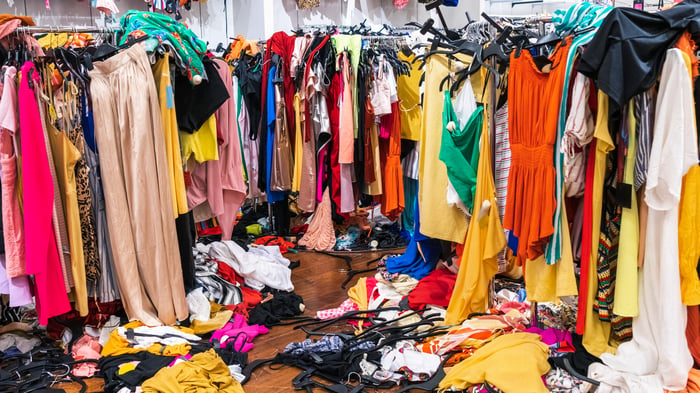 While Amazon might not seem like a natural stock to include in this list because of the broad array of products it sells, the e-commerce giant has become the largest apparel retailer -- not just online, but anywhere!

Amazon surpassed Walmart last year to top the list, and is significantly ahead of retailers you would more closely associate with apparel sales, like Target, Kohl's, and Gap (including its Old Navy chain).

That doesn't mean consumers are buying Amazon-branded clothing. Third-party retailers account for 87% of its fashion listings, a situation the e-commerce leader has encouraged to make its website the go-to destination for clothes and footwear.

Yet its own labels are top sellers, too. From Shopbop to Zappos, Amazon offers a range of fashion opportunities. Its Amazon Fashion offers access to Prime Wardrobe as a response to the success of Stitch Fix.

Analysts estimate Amazon generates $30 billion in annual apparel sales. So while you might not think of Amazon as an apparel retailer, no list of top apparel stocks to buy would be complete without it.

Burlington Stores is one of those retailers mentioned above that was hit hard by the COVID-19 outbreak. Unlike a number of other similarly-situated companies, it didn't have much of an e-commerce presence to offset the closure of its stores. The off-price apparel company saw sales cut in half in the first quarter as a result.

Yet there's a good chance Burlington can bounce back sharply as retail recovers. Many apparel retailers had to cancel their orders from vendors because they didn't want to stockpile merchandise, which gives the discounter an opportunity to swoop in and scoop up the inventory at fire-sale prices.

Because Burlington and other off-price retailers look for closeouts, overruns, and other opportunistic purchases to fill their racks, this segment of the apparel industry has a unique chance to gain big and regain its balance much more quickly than other segments of retail.

Burlington's stock has nearly doubled off the lows it hit in March at the outset of the pandemic, but shares still trade more than 15% below the highs they hit just before then, when the company was marching on a steady, upward trajectory.

It's a good bet that Burlington Stores can regain that same traction in short order, and investors would be wise to look more closely at its business.

Just as having Amazon on a list of top apparel stocks is essential, so is including Nike, one of the top apparel brands in all the world.

With over $41 billion in trailing sales, the Swoosh is a behemoth with one of the most recognizable and respected brands. At times controversial, it is often on the leading edge of culture.

Nike is set to report results for the fourth quarter of its 2020 fiscal year later this month. Analysts forecast that revenue declined 26% year over year. However, Nike has invested heavily in direct-to-consumer sales, even pulling its storefront from Amazon. Its extensive digital footprint could end up surprising Wall Street when it releases its fourth-quarter numbers.

It's questionable whether many of the lifestyle changes we've made during the pandemic will last, but working out from home, at the gym, or in the great outdoors will continue. Providing the appropriate gear -- from clothes to footwear -- is right in Nike's wheelhouse.

Nike isn't a cheap stock, but as the industry leader, it undoubtedly deserves the premium it carries. Nike's rebound will likely drive its valuation even higher.