Please ensure Javascript is enabled for purposes of website accessibility
Log In Help Join The Motley Fool
Free Article Join Over 1 Million Premium Members And Get More In-Depth Stock Guidance and Research
By Rick Munarriz – Jun 20, 2020 at 7:45AM

These are two players going in different directions.

We're now a summer removed from the day that Blue Apron Holdings (APRN 3.96%) and Beyond Meat (BYND -1.80%) became partners. The provider of gourmet meal kits teamed up with the fast-growing provider of plant-based foods to offer Beyond Burger patties to enhance its existing vegetarian plans.

The news provided a bigger boost to Blue Apron shareholders than Beyond Meat investors, lifting the former's stock as much as 59% higher the day the partnership was announced. The unfortunate twist here is that both stocks are now trading below where they were the day after the deal was made public 11 months ago.

Which one is the better buy now? The answer may seem fairly obvious, but let's go through the process. 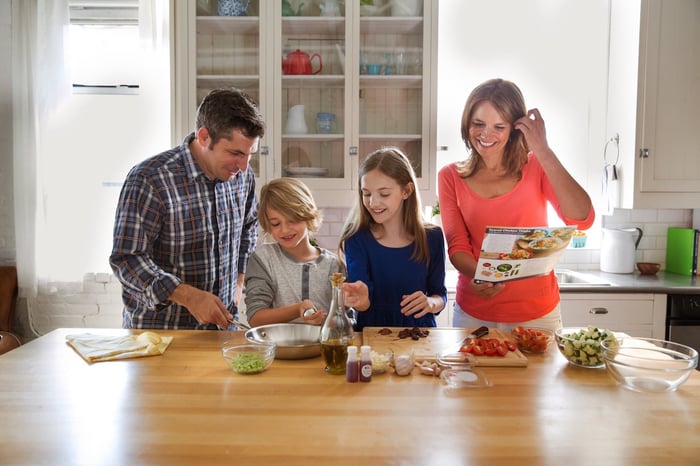 Blue Apron and Beyond Meat are companies going in different directions. Blue Apron has posted 10 consecutive quarters of double-digit declines in revenue. Those hefty steps down add up. Trailing revenue is less than half where it was in 2017.

Beyond Meat's growth is skyrocketing, with triple-digit top-line growth through at least the last four quarters, and those big steps up also naturally add up. Beyond Meat's revenue has risen more than tenfold since 2017.

Both companies are also leagues apart at the other end of the income statement. Blue Apron is losing a lot of money and not getting any closer to generating positive net income. Beyond Meat has started to turn the corner, finally turning a profit after years of growing its business.

The partnership between the two passing ships last summer exposed the weakness in Blue Apron. It's a volatile stock that will swing on news that doesn't justify the upticks.

The stock rose sharply when it announced that it would be offering Beyond Meat's plant-based protein for its burgers, but sales didn't pick up. Three months ago, Blue Apron had a ridiculous rally. The stock popped 14-fold through the first half of March as investors figured it would be a COVID-19 winner with restaurants closing down and folks hesitant to shop for groceries. It wasn't a rational response. The stock has gone on to shed two-thirds of its peak value, and analysts see another quarter of declining revenue.

Beyond Meat may not be close to the all-time highs it hit last summer, but that was a frothy situation of folks chasing a hot IPO. The stock has gone on to more than double in 2020, and this time, the gains and the rally appear sustainable. Beyond Meat isn't the only player in plant-based diets, but it's a niche leader of a rapidly expanding category.

Blue Apron will have its speculative spikes, but until it finds a way to grow again -- ideally in a profitable manner -- it's never going to command the kind of respect that Beyond Meat has earned on Wall Street. This one isn't really close. Beyond Meat may have some legitimate valuation concerns, but it's easily the better buy when pitted against Blue Apron.