Brick-and-mortar chains suffer the slings and arrows of outrageous fortune.

It has already been a disastrous year for consumer-facing stocks.

Nonessential retailers -- the ones that sell discretionary items like apparel -- were forced to close their stores in March when the pandemic first started. Then, just as some of them were starting to reopen, they were vandalized by looters in a number of cities after George Floyd's killing.

Now, as retailers, restaurants, entertainment, and travel companies are trying to get customers back in the door, they're faced with a fraught question: whether to make customers wear masks or not.

Masks have emerged as the latest front in the culture wars surrounding the pandemic, and for businesses, it's difficult to know how to handle it. 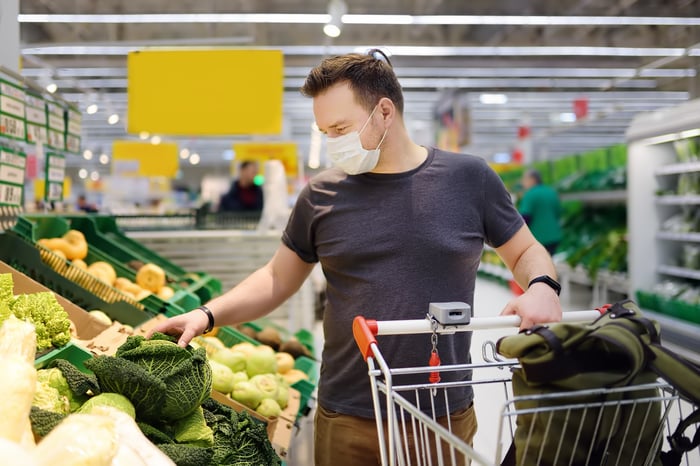 AMC Entertainment (AMC -3.08%), the country's biggest movie theater chain with around 600 theaters nationwide, announced plans to reopen theaters in July. It unintentionally waded into the controversy when CEO Adam Aron told Variety, "We did not want to be drawn into a political controversy. We thought it might be counterproductive if we forced mask-wearing on those people who believe strongly that it is not necessary. We think that the vast majority of AMC guests will be wearing masks."

Aron did not get his wish. There was swift backlash against AMC after the news broke. The company reversed the policy, saying that the chain would require customers to wear masks. Rivals Cinemark and Regal have said they will not require masks, however.

Though medical experts advise using masks in public and in situations where social distancing isn't possible, and studies have shown that wearing masks can reduce the risk of coronavirus transmission by as much as 75%, there appears to be a sizable percentage of Americans who refuse to use them and don't want to patronize businesses requiring them. See the case of conservative activist Brandon Straka, who was recently removed from an American Airlines (AAL -2.16%) flight after refusing to don a mask and subsequently banned by the airline.

Costco (COST -0.00%) was among the first retailers to insist that customers wear masks. Though the move has turned off some shoppers and caused the retailer to deny others entry, sales have remained strong as the company's status as an essential retailer has helped it maintain growth. Comparable sales at U.S. stores rose 9% excluding fuel, boosted by e-commerce sales that have more than doubled.

With consumer discretionary companies already struggling to bounce back from shutdowns and other challenges related to the pandemic, the mask controversy will only add to their list of woes. Even if businesses like AMC have mask-wearing policies, they can still be difficult to enforce, and consumers who dislike such rules may simply remove their masks once inside an establishment. At a movie theater where guests eat and drink, there's also the reality that they'll need to take off their masks for at least part of the experience.

Meanwhile, President Trump and other political leaders have been reluctant to endorse wearing masks. Trump even said that some Americans wear masks to signal disapproval of him, further politicizing the issue. Those comments and the debate around masks mean that the controversy isn't going away anytime soon.

The other issue is that consumers who don't like these businesses' pandemic policies have the option of staying home and supporting online competitors. The debate around AMC's mask policy seems like it will only benefit streamers like Netflix and Roku, as staying home is an easy alternative to the movie theater. E-commerce sales are likely to continue to boom. Consumers will avoid long-distance travel or explore options like RVing, as flying in an airplane is still not seen as safe. According to the TSA, domestic passenger traffic is still down nearly 80% from a year ago.

In China, Japan, South Korea, and Hong Kong, infection rates have plummeted with the help of near-universal mask-wearing. In the U.S., a full embrace of face coverings is far from reality, and that means "lockdown stocks" like Amazon and Netflix that provide alternatives to real-world commerce should continue to be winners.