The stock market is rallying back toward all-time highs, but not all businesses are in the same boat.

2020 has been a year for the ages but for all the wrong reasons. But markets have scaled this wall of worry as the S&P 500 is a mere 4% below where it started the year and about 8% below all-time highs.

Yet millions are unemployed, and while economic activity has rallied from the sharp drop in late March and early April, it's still a long way from "normal." What gives? 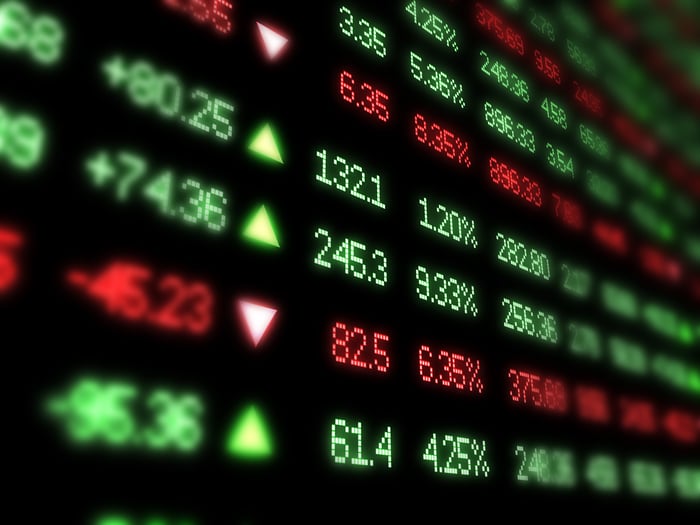 The stock market may appear disconnected from reality, but it's important to remember that indices like the S&P 500 are just averages of the going prices for all businesses contained within the index. Put simply, think less about the "stock market" and more about what it actually is: a collection of individual businesses. At any given time, some of those businesses will do well -- others, not so much.

As for the current situation, many companies are in dire straits, but many others are doing more than well -- some in spite of the pandemic, others because of the pandemic. In fact, some of the most valuable companies in the world like Amazon, Microsoft, and myriad other digital businesses are proving plenty resilient. In high-growth mode already, the current state of affairs has kicked many of them into overdrive.

Intentionally running on slim margins as they reinvest their profits to maximize growth, these stocks are surging in value. That means they make up a higher percentage of an index like the S&P 500. Their rise distorts things and makes it look like the "stock market" is out of touch with the real world. It isn't -- it's just that the digital world, which continues to increase in importance, is pulling up the average.

What of those businesses with a foot still solidly planted in the physical? Many of them are trying to bridge troubled waters, but it's going to take time for them to recover. And that's the point of this piece. I purchased three early in the crisis: Texas Roadhouse (TXRH 4.18%), Hasbro (HAS -0.13%), and Skechers (SKX 3.12%).

While I expect turbulent times lie ahead -- not just for these "recovery" stocks but also for the stock market overall -- these companies have a very long way to go before they return to all-time highs. I certainly don't know when that will happen, but I do expect them to be just fine long-term.

Suburbia is doing OK -- at least for now

First, there's Texas Roadhouse, which has taken a beating just like the rest of the restaurant industry. According to the U.S. Census Bureau, food services and drinking place sales fell 53% in April and 39% in May compared to 2019. Those precipitous drops hint at the kind of pain that may be coming when Texas Roadhouse provides its report for the second quarter, which wraps up at the end of June. The month-over-month rebound from the low traffic of late March and early April is encouraging. Still, the Census Bureau averages are ominous, even for a chain that might be able to top its peers' performance.

I think Texas Roadhouse could fare better than most. During its first-quarter update, the eatery said its comparable-store sales were down some 47% in April (ugly but not as bad as the average Census Bureau figures). The company has also been a slow-and-steady grower for years with its focus on suburban America. That strategy proved fortuitous during the pandemic. At least up to this point, rural areas have been less affected by the virus than urban ones. Roadhouse has thus been able to keep the bulk of its locations operating, though it had to adopt a "to-go" model while also experimenting with takeaway meal kits.

But the real positive is that because of its measured approach to expansion, Roadhouse had zero debt heading into this crisis. The company did draw down $190 million from its revolving line of credit to end the first quarter with $231 million in cash, and it burned through $30 million of that in April. Nevertheless, not many restaurant chains could boast that type of liquidity. Things could certainly take another turn for the worse, but I like Texas Roadhouse's chances at survival more than those of most other casual restaurants. The stock remains down 29% from its most recent high-water mark set in late Feb. 2020.

Shelter-in-place wasn't all bad for toys

Though it has rallied from its nearly 60% drubbing in March, Hasbro is another stock that has yet to return to anywhere near where it was at the beginning of the year. Shares are down 32% in 2020 to date, even though year-over-year revenue was only down a modest 8% in the first quarter. That drop was mostly due to delays in new TV programming launches from Entertainment One, its new subsidiary.

The toymaker -- which is responsible for brands like Monopoly and Transformers, as well as Walt Disney's expansive lineup of toys -- was priced at a premium before the pandemic hit. And it did pay a hefty $4.5 billion for eOne (which brought Hasbro an entertainment studio and made it the owner of Peppa Pig and PJ Masks). Nevertheless, with kids and parents alike stuck at home, the merchandising side of the business has held up well. Entertainment has filled the spare time many households had during the lockdown. New TV shows via eOne are expected to start debuting by the end of 2020 as well.

Plus, Hasbro has continued paying its dividend, which is currently yielding 3.6% a year. Hasbro doesn't provide forward guidance, and business in the second quarter could deteriorate, but I think demand for toys and TV content will remain resilient.

Many still think of Skechers as a quirky, cheap, upstart shoe brand, but the company has elevated its global image in recent years. Granted, it's no Nike. Far smaller and more dependent on retail partners, Skechers has nowhere near the online direct-to-consumer business of its larger rival. Yet Skechers has earned itself a place in urban culture.

The company is holding its own. During the first-quarter update, management revealed that its e-commerce sales surged 250% year over year by the end of April, and at that time were at a $500 million annual run-rate. That's still only some 10% of total sales in 2019, but Skechers has been able to quickly pivot to digital. The company will be a consumer goods brand beneficiary as the global economy slowly begins to open back up.

But the big selling point for me is the balance sheet. After drawing on its line of credit in March to provide a safety cushion, cash and equivalents were $1.29 billion and debt $700 million -- providing a net cash balance of $590 million. That buys this shoemaker much-needed time to outlast any lockdowns to halt the spread of infection. Shares are down 28% this year as of this writing. As with Texas Roadhouse and Hasbro, I expect a very volatile ride ahead, but I think all three of these companies will be just fine long term.