Please ensure Javascript is enabled for purposes of website accessibility
Log In Help Join The Motley Fool
Free Article Join Over 1 Million Premium Members And Get More In-Depth Stock Guidance and Research
By Bram Berkowitz – Jun 22, 2020 at 8:41AM

There are fewer partners for mutual savings banks to merge with, and it's more difficult for them to compete with other acquirers.

I was absolutely shocked to hear the recent news that Eastern Bank, the nation's largest mutual savings bank, had filed documents with the Securities and Exchange Commission to commence what could end up being a $2 billion IPO. Not only does the move seem like a major departure from its culture by the very nature of becoming a publicly traded company, but I was also surprised because the bank appeared to be doing well.

The bank grew total assets by about $2 billion over the last five years, reaching $11.6 billion and representing about 21% growth. Maybe it wasn't doing a regular 10% compounded growth each year, but it is still the third-largest state-chartered bank in Massachusetts -- an extremely competitive banking market with 110 state banks, according to the FDIC, as well as a heavy presence from some of the larger players, such as Bank of America (BAC -1.50%) and Citizens Financial Group (CFG 1.51%). The bank also managed to establish this strong presence while donating 10% of its profits each year to charity.

In its prospectus, Eastern cited the fact that going public would make the company a "more attractive and competitive bidder for mergers and acquisitions of other financial institutions or business lines as opportunities arise." I believe this is the main reason Eastern is going public. It's also a factor that could lead many other mutual savings banks to follow suit. 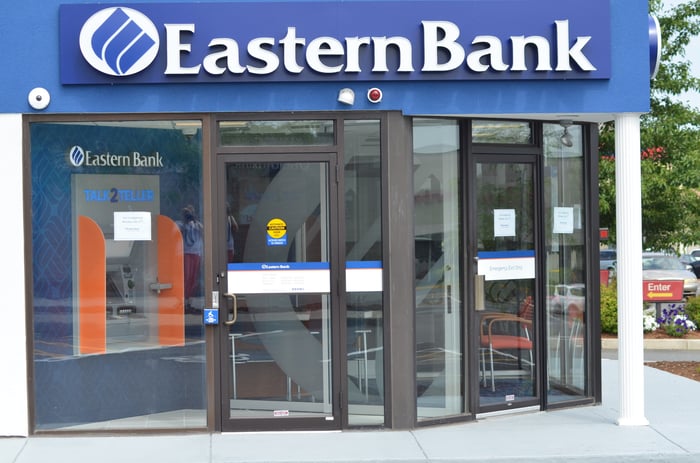 The depositors don't manage the bank, but they play a part in electing the people who do, and they vote on big decisions like mergers or acquisitions. But this structure also somewhat limits how mutual savings banks can go about mergers and acquisitions (M&A), which play a big part in how many banks grow. As laid out by the Pennsylvania Association of Community Bankers, there are two main ways in which a mutual savings bank can purchase another bank.

2. Purchase a stock bank: A mutual savings bank can also purchase a publicly traded stock bank. Typically, this happens when a mutual institution is structured with a mutual holding company and a subsidiary mutual bank. Because the private mutual institution has no stock to offer, the acquirer is almost always forced to buy the stock bank in cash. When the stock bank is merged into the mutual bank, the stock of the public bank is typically delisted and ceases to be publicly traded.

While obviously both of these M&A methods work, they result in a limited number of acquisition candidates. In most cases, mutual banks would prefer the first route -- a merger of mutuals -- because they don't need to pay cash.

There are more stock banks for mutuals to buy, but this is difficult because these transactions normally require an all-cash deal, which can eat up a mutual savings bank's available capital and greatly reduce its capital ratios, especially if a bank it wants to buy is going for a significant premium. As Eastern Bank noted in its prospectus, going public would allow the bank to purchase other banks using its stock, cash, or both. A lot of bank deals between public banks are done partly using stock, which in effect allows the acquiring company to issue new shares and exchange them for shares of the company they're purchasing.

Eastern Bank was the largest private mutual savings bank in the country, yet it struggled to grow through M&A, despite the fact that consolidation in the banking industry has been booming in recent years. Between 2006 and the end of 2019, the total number of U.S. banking institutions declined by 41%, and there is likely a lot more consolidation to come.

Eastern has previously been an active acquirer. Its insurance subsidiary acquired 31 independent insurance agencies between 2004 and 2018, according to its prospectus. The bank also made seven bank acquisitions between 1997 and 2014. But since that time, Eastern has been silent on the bank M&A front. Meanwhile, its two direct competitors -- Independent Bank Corp (INDB -1.68%), the holding company of Rockland Trust, and Berkshire Hills Bancorp (BHLB -1.34%) -- have been snapping up banks left and right.

When asked about whether the bank had been outbid on recent acquisitions, Eastern Bank CEO Bob Rivers recently told The Boston Business Journal, "We just couldn't afford them." Rivers said Eastern had been willing to spend $100 million to $200 million on past opportunities, but banks in the Boston area have gone for much higher. Independent Bank Corp recently acquired Blue Hills Bank for $727 million.

Another thing to point out is that Eastern is probably going public and raising capital for the same reason that PNC Financial Services Group (PNC -0.87%) just sold its stake in BlackRock (BLK -2.42%). Bank valuations are low right now and will likely remain lower than they were before the pandemic for the foreseeable future. For any bank in a position of strength, now is a good time to have cash on hand. That way, when they see potentially game-changing acquisition, they can pounce and avoid paying a huge premium down the line.