Please ensure Javascript is enabled for purposes of website accessibility
Log In Help Join The Motley Fool
Free Article Join Over 1 Million Premium Members And Get More In-Depth Stock Guidance and Research
By Brian Stoffel – Jun 23, 2020 at 7:34AM

It could garner great returns, but I still don't like these dynamics.

Few megachains do a better job taking care of their employees -- and their supply chain -- than Starbucks (SBUX -0.63%). The company has grown not just by focusing on coffee, but by creating a "third place" where communities can gather.

If you can't tell, I'm a fan of what Starbucks has created. And in the aftermath of COVID-19, shares of the company are still trading 24% lower than they were last summer. That means it's time to buy, right?

In my opinion, it's still not worth owning shares. Here's why. 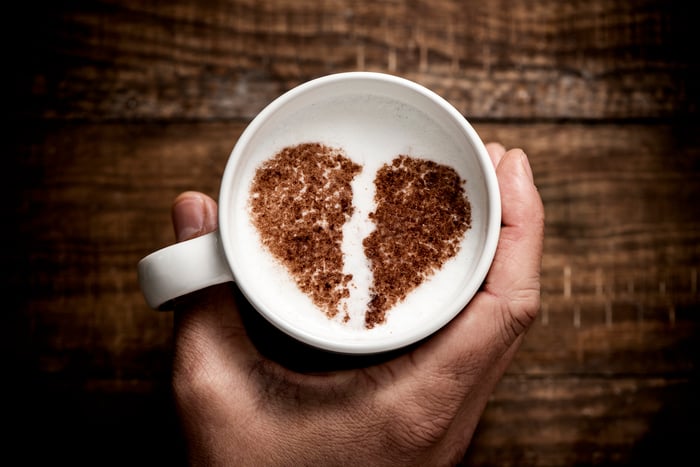 Over the past decade, my portfolio has more than quadrupled the stock market's returns. It wasn't always this way. It took a long time for me to learn how to invest in stocks. One of the toughest lessons I had to learn was: If a company has a wide moat and optionality, you buy and hold it no matter what. If it doesn't have those things, then valuation matters.

I emphasized those two concepts because they are so important. Let's tackle them one at a time.

Starbucks has a middle-of-the-road moat

The simplest definition of a moat is: the thing that will keep the competition at bay even after it's clear you're becoming successful. Without a moat, others can come along, offer the same thing for slightly less, and steal your business.

And that's it. I'll admit, as far as any restaurant goes, you can't really hope for much more. This is as good as it gets. So this isn't necessarily a knock against Starbucks as much as it is against investing in any big chain (when the valuation isn't favorable -- more on that below).

Starbucks can easily check that first box. The other two, not so much. There's some data showing that many millennials are currently giving Starbucks a pass on this -- so it might be the exception to the rule. Nonetheless, I still worry about the strength of Starbucks' brand over the coming decade.

"Optionality" refers to the ability of a company to pursue multiple avenues to fulfill their stated mission. Amazon.com, for instance, started by selling books, but expanded to what it is today because its mission was to become the planet's most customer-centric company.

For Starbucks, optionality has often presented itself in terms of acquisitions. But whether it was Teavana or La Boulange, those big-ticket purchases never seemed to pan out.

Some have argued that Starbucks' recent decision to close nearly 400 North American stores and pivot toward mobile orders and drive-thru locations is a sign of optionality. There's no doubt in my mind that Starbucks will create a best-in-class experience through this pivot -- and benefit via reduced overhead in the process.

But it comes with a huge caveat: Starbucks became famous by creating a "third place" away from home and work. The combination of this move, along with the effects of COVID-19, mean that such a focus is no longer front and center. In context, this makes sense, but creates an existential problem: What makes Starbucks unique anymore? It's much easier for the competition -- from national chains to mom-and-pops -- to mimic a lower-footprint experience.

Thus, I'm not sold on there being that much optionality, either.

That all brings us to the company's valuation. Even absent a stellar moat and optionality, a chain like Starbucks could be a good investment at the right price (and with some impressive growth rates).

But again, that's simply not the case. Even after a 20%-plus drop over the past year, the stock trades for over 27 times earnings and nearly 90 times free cash flow. Even if we normalize free cash flow to pre-COVID (fiscal 2019) numbers, Starbucks trades at 27 times free cash flow -- far too pricey for my taste. That's higher than industry peers, and higher than I'm willing to pay for a company that hasn't grown comparable-store traffic by over 2% since fiscal 2015.

Why I could be wrong

All of this said, I've had these feelings on Starbucks for quite some time. Thus far, I've been wrong. Since I wrote this article in 2018 -- which includes many of the exact same reasons -- Starbucks stock has advanced 25%. That's more than double the broader market's gain.

There are still several growth drivers ahead -- none more important than the company's ambitions in China. Success there would render my own concerns mute. So, too, would a realization that Starbucks' moat is far stronger than I give it credit for -- drawing in more millennials every year by the power of its brand.

As a human being, I'm cheering for Starbucks to do well. The company has largely been a force for good. But as an investor, despite the stock's underperformance this year, I'm still giving the company a pass.