Please ensure Javascript is enabled for purposes of website accessibility
Log In Help Join The Motley Fool
Free Article Join Over 1 Million Premium Members And Get More In-Depth Stock Guidance and Research
By James Brumley – Jun 25, 2020 at 9:08AM

Investors, consumers, and fleet owners may be looking at the Nikola/Tesla truck competition in the wrong way.

With just a cursory look, the planned semitruck (the "tractor" part of a "tractor-trailer") from Nikola Motors (NKLA -4.66%) looks like a copycat of the all-electric rig that Tesla (TSLA -4.59%) has been test-driving for a couple of years now. Neither vehicle is powered by diesel fuel. Rather, both are powered by electric motors. It's quickly become a mainstream source of automotive propulsion.

In some regards, though, Nikola's heavy-hauling class 8 trucks will be different from Tesla's take on rigs. Tesla's truck will haul its heavy, rechargeable battery around with it. Nikola's trucks use fuel cell technology to convert stored hydrogen into electricity. The latter concept is mostly foreign to most people, which might explain the world's hesitance to embrace these motors. People understand batteries better. Besides, battery-powered cars are technically more efficient.

Class 8 trucks, however, are a different story. If a high-profile name like Nikola can show off the advantages of fuel cell mechanical engines -- which are already in use in lots of places -- it could prove to be a long-awaited boon for a couple of names in the hydrogen fuel cell motor business. 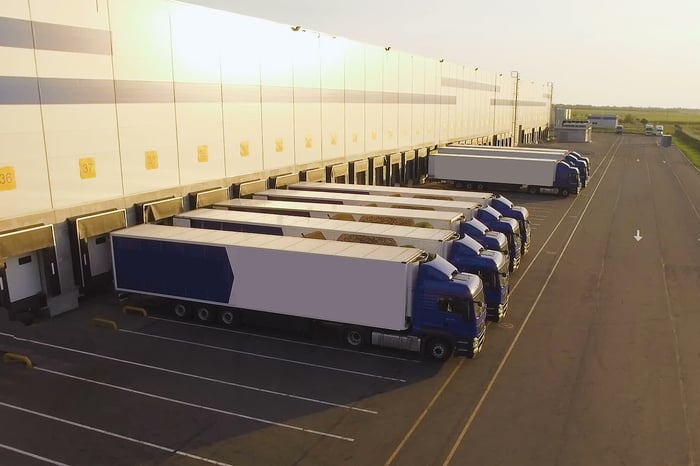 Not an either/or kind of thing

"Hydrogen is very light and batteries are very heavy," explained Hugo Spowers, CEO of fuel cell car company River Simple Movement, in an interview with S&P Global late last year. He went on to say: "For long-range driving, batteries can become ludicrously inefficient, though for short ranges, they really make sense." His conclusion? "We don't argue about which will win. We need both."

Spowers' comment cuts straight to the heart of a long-standing debate that may never have a clear winner.

Tesla's battery-powered rigs undoubtedly work, but the battery the truck must lug around with it will likely weigh somewhere between 8,000 and 15,000 pounds (depending on its capacity). That extra weight, even after subtracting the weight of a typical diesel engine but adding back in the weight of electric motors, balances precariously on the narrow band of overlap between enough power and too much weight. It's also estimated to cost tens of thousands of dollars (again, depending on a variety of factors), pushing the payback period on a much bigger upfront investor even further down the road than most truck owners now face with conventional diesel engines.

In contrast, a recent study commissioned and published by carmaker Volkswagen suggests that when all inputs are considered, battery-powered vehicles are between 80% and 90% efficient, whereas hydrogen fuel cell vehicles are only between 25% and 35% efficient. Never even mind the lack of infrastructure that's otherwise limiting the adoption of fuel cell sedans built for everyday travel.

There's an important nuance buried in the middle of the debate, however. That is, the bigger the vehicle and its corresponding engine, the more mathematical sense a hydrogen-powered class 8 "big rig" makes. Nikola CEO Trevor Milton posted at his LinkedIn page just this week:

"You have to operate long distances to use the cheap energy. You have to pull an exact amount of energy out every hour and it has to be stable, something hydrogen production is perfect at and BEV [a battery powered electric vehicle] is terrible at. You need to be able to drive 500-750 miles without stopping to ensure you don't enter the utility grid or pay their fees. This is where hydrogen makes sense."

It's not a nuance that's gone unnoticed by truck fleet owners, nor will Nikola's class 8 semis be the first such trucks on the road (though they might be the coolest). Automobile companies Toyota (TM -1.27%) and Hyundai are collaborating to develop hydrogen fuel cell haulers. Truck brand Kenworth is also working with Toyota to create this whole new category of tractors.

In the meantime, it's possible you've already hitched a ride on a huge fuel cell-driven vehicle without even realizing it. Hydrogen fuel cell engine maker Ballard Power Systems (BLDP -2.28%) has been tapped to make the power plants for as many as 3,000 buses operating within the U.K.'s transit system. Hundreds of its fuel cell power plants have already been put to work in Asia as well.

Ballard isn't alone on the hydrogen fuel cell landscape, though. Plug Power (PLUG -5.47%), perhaps best known as a maker of backup power systems or even primary power systems, can also adapt its technology for automobiles. It went so far as to custom-build a fuel cell power system specifically for class 8 trucks. Unveiled in February, its 125-kilowatt ProGen hydrogen engine is intended for the class 6, 7, and 8 truck market that Tesla and now Nikola are close to penetrating.

The battery/fuel cell story is still unfolding, but it's starting to gel in a way that consumers, investors, and fleet owners can latch onto. There is no single winner. Rather, each technology has its advantages and disadvantages. Short trucking trips may be best handled with battery-powered vehicles, while longer hauls might be more cost-effective with hydrogen fuel cell hardware. Destinations like warehouses or distribution centers can build enough hydrogen refueling infrastructure on-site to meet the need without building hydrogen refueling stations across the nation, or for that matter, the world.

It's great news for Ballard and Plug Power, which still derive most of their business from stationary fuel cell power plants. Their underlying technologies now have a head-turning champion in Nikola -- something both companies and their peers have been waiting on for a while.